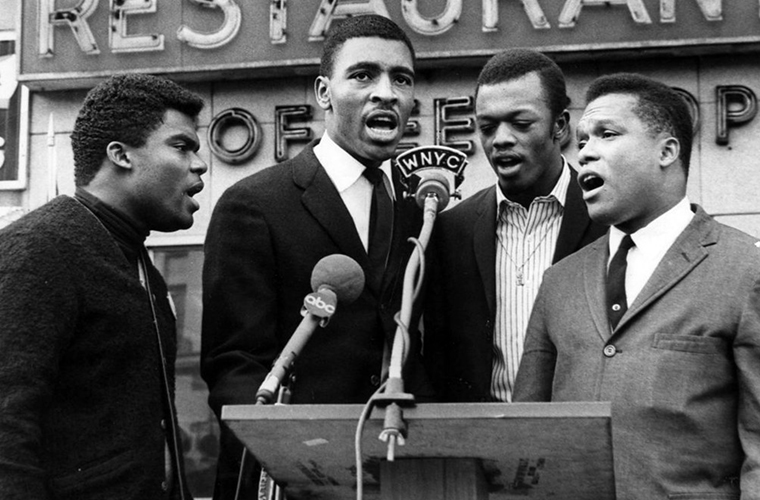 During the early 1960s the Freedom Singers, from Albany, performed throughout the country to raise funds for the Student Nonviolent Coordinating Committee (SNCC) and to inform audiences about the grassroots organizing campaigns expanding in communities across the South.

Perhaps because it originated in the Black church, where congregational singing had traditionally formed an essential part of worship, southern civil rights protest was commonly accompanied by the music of the Black choral tradition. Whether sung in churches or in jails, such freedom songs as “Oh Freedom (Over Me)” and “This Little Light of Mine” helped to shape the movement and sustain it in moments of crisis. Most freedom songs were common hymns or spirituals familiar to the southern Black community; the lyrics were often modified to reflect the political aims of the civil rights movement rather than the spiritual aims of a congregation. The songs not only reflected the views and values of the movement’s participants but also, in the case of the Freedom Singers, helped to share them with a national audience.

Nowhere was the transformative power of song more apparent than in Albany. News reports from the small southwest Georgia town highlighted the impressive range and depth of the region’s singers, and even seasoned organizers expressed amazement at the force of Albany’s congregational singing. After witnessing the galvanizing effect of the town’s singers during a visit to Albany in 1962, folk singer Pete Seeger suggested to SNCC executive secretary James Forman that a touring group might help raise funds for the civil rights organization’s future campaigns.

The Freedom Singers formed in December 1962 under the leadership of SNCC field secretary Cordell Reagon, a veteran of the sit-in movement in Nashville, Tennessee, where music played a similarly important role. With the help of Albany natives Rutha Mae Harris and Bernice Johnson, whom he later married, Reagon recruited Charles Neblett, a veteran of civil rights demonstrations in Cairo, Illinois, and the four performers left Albany to tour the country in support of civil rights and the goals of SNCC.

Over the next nine months, the group traveled 50,000 miles through forty states in a Buick station wagon, playing at colleges, elementary and high schools, concert halls, living rooms, jails, political rallies, and the March on Washington in August 1963. During their initial tour, the group performed alongside numerous folk music luminaries, including Pete Seeger, Bob Dylan, Joan Baez, and Peter, Paul, and Mary, and in June 1963, the New York Times identified the Freedom Singers as “the ablest performing group” to emerge from a broad field of folk musicians.

Although the original Freedom Singers disbanded after recording an album in 1963, later incarnations continued to perform under the same name. Bernice Johnson Reagon later enjoyed success as a founding member of Atlanta’s Harambee Singers and as the organizer and founder of the critically acclaimed singing group Sweet Honey in the Rock. In 1995 Rutha Mae Harris formed the Albany Civil Rights Museum Freedom Singers, who perform once a month at the museum.