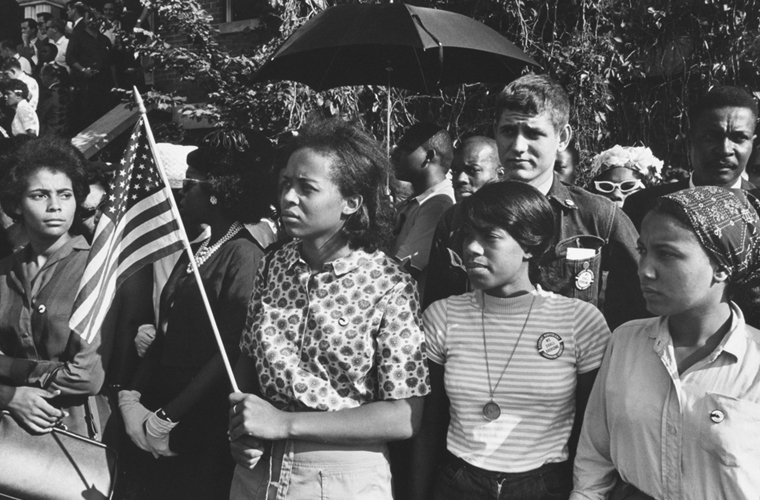 The Student Nonviolent Coordinating Committee (SNCC) was founded in 1960 in the wake of student-led sit-ins at segregated lunch counters across the South and became the major channel of student participation in the civil rights movement. Members of SNCC included prominent future leaders such as former Washington, D.C. Mayor Marion Barry, Congressman John Lewis, and NAACP chairman Julian Bond.

SNCC Emerges From the Sit-In Movement
In February 1960, four Black college students in Greensboro, North Carolina, stayed in their seats at a segregated Woolworth’s lunch counter after the staff refused to serve them. Some 300 students soon joined their protest, which received widespread media coverage, sparking a movement of similar sit-ins by thousands of students at segregated establishments across the South.

Civil rights leaders recognized such young activists as a powerful new force in their efforts to combat racial discrimination and win equal rights for Black Americans. As the Rev. Martin Luther King Jr. acknowledged in a speech at a North Carolina church in mid-February 1960: “What is new in your fight is the fact that it was initiated, fed, and sustained by students.”

Seeking to harness the momentum of the sit-in movement, veteran civil rights organizer Ella Baker invited students who had taken part in the sit-ins to a gathering at Shaw University in Raleigh, North Carolina in April 1960. Baker had begun her career of activism as a student at Shaw more than 40 years earlier. She worked for the National Association for the Advancement of Colored People (NAACP) in the 1940s and helped King organize the Southern Christian Leadership Conference (SCLC) after the Montgomery Bus Boycott. At the time of the sit-ins, she was the SCLC’s executive director.

Founding of SNCC and the Freedom Rides
Some 200 students attended the conference at Shaw University from April 16-18, 1960, during which the Student Nonviolent Coordinating Committee (SNCC, pronounced “snick”) was born. Though King and others hoped that SNCC would function as the youth wing of the SCLC, Baker stressed the importance of remaining independent and unaffiliated with other civil rights groups.

Beginning its operations in a corner of the SCLC’s Atlanta office, SNCC dedicated itself to organizing sit-ins, boycotts, and other nonviolent direct-action protests against segregation and other forms of racial discrimination. In April 1961, SNCC activists joined a campaign launched by the Congress of Racial Equality (CORE), another civil rights group, to desegregate interstate bus transportation. Although the Supreme Court had ruled it was unconstitutional, bus travel continued to be segregated across the South.

During the Freedom Rides in May 1961, teams of activists (many of them students) rode buses in mixed racial groups into and across the South. Diane Nash, one of the few prominent women in the sit-in movement and a founding member of SNCC, helped organize the protest and recruit riders. The freedom riders met with violent resistance on the part of local law enforcement and white segregationist Southerners; hundreds of them were arrested, beaten, and threatened with death. That November, the Interstate Commerce Commission finally mandated the full desegregation of all interstate travel facilities, giving SNCC its first solid victory on a national level.

Freedom Summer
Building on its focus on direct action (sit-ins, protests, boycotts) SNCC began working to combat one of the most difficult issues of the civil rights movement: the disenfranchisement of Black voters across the South through discriminatory voting laws, intimidation, and violence. Starting in late 1961, SNCC organizers began embedding themselves in rural communities and recruiting local young people to join in voter registration efforts.

In 1964, SNCC and other civil rights groups decided to focus their grassroots voting rights campaign on Mississippi. During Freedom Summer, hundreds of volunteers poured into Mississippi, joining efforts to increase Black voter registration and establish “Freedom Schools” for Black children throughout the state.

Segregationists in Mississippi, including both local law enforcement and white supremacist groups like the Ku Klux Klan, met the influx of volunteers with a solid wall of resistance. By the end of the summer, they had arrested hundreds of volunteers, beaten dozens, and brutally murdered at least three—Michael Schwerner and Andrew Goodman, white men from New York, and James Chaney, a local Black man.

Shift from Nonviolence to Black Power
SNCC members were outraged by events at the 1964 Democratic National Convention, where the party refused to replace the all-white Mississippi delegation with one from the integrated Mississippi Freedom Democratic Party. Their anger contributed to a growing distance between SNCC and more mainstream civil rights organizations like King’s SCLC.

This divide continued after the passage of the Voting Rights Act of 1965, as some within the group began advocating for a Black-only political party in Mississippi and other more radical steps beyond nonviolent direct action. These included Stokely Carmichael, who became chairman of SNCC in 1966, replacing John Lewis. Carmichael’s use of the phrase “Black Power” during the March Against Fear, a voting rights march in Mississippi that June marked SNCC’s transition to a focus on Black self-reliance and the plight of low-income Black people living in urban centers.

Herbert “Rap” Brown, who succeeded Carmichael in 1967, went even further down this path, forging a public alliance with the Black Panther Party. In 1968, Brown replaced “Nonviolent” in SNCC’s name with “National.” With white activists increasingly leaving the group, its income declined, forcing a reduction in direct action organizing efforts. By 1970, with the civil rights movement itself splintering into factions, SNCC had lost its employees and most of its branches. With Brown facing various legal charges, the organization struggled to survive, and by the end of 1973 SNCC no longer existed.