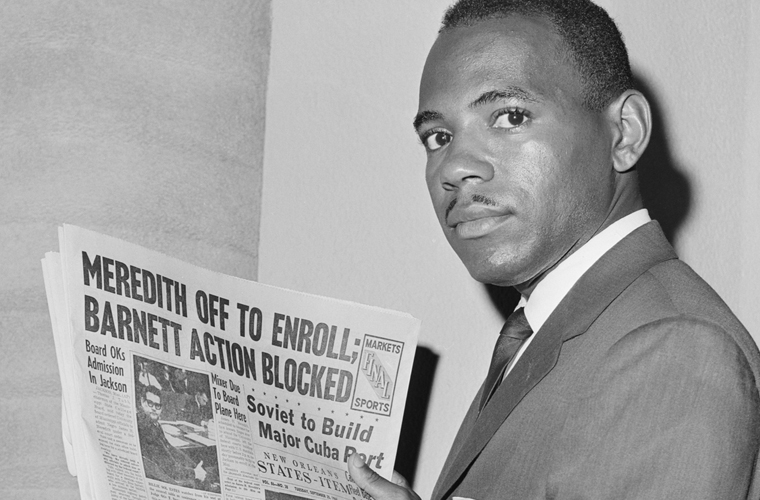 James Meredith is a civil rights activist who became the first African American to attend the University of Mississippi in 1962. Born in Mississippi in 1933, James Meredith was raised on a farm with nine siblings. He joined the military after high school and attended an all-black college before becoming the first black student at the University of Mississippi in 1962. After he graduated, Meredith earned a law degree and became involved in politics. He lives in Jackson, Mississippi, and continues to be active in civil rights.
Born in Kosciusko, Mississippi, on June 25, 1933, James Howard Meredith was raised on a farm with nine brothers and sisters, largely insulated from the racism of the time. His first experience with institutionalized racism occurred while he was riding a train from Chicago with his brother. When the train arrived in Memphis, Tennessee, Meredith was ordered to give up his seat and move to the crowded black section of the train, where he had to stand for the rest of his trip home. He vowed then that he would dedicate his life to ensuring equal treatment for African Americans.
After high school, Meredith spent nine years in the United States Air Force before enrolling in Jackson State College—an all-black school—in Mississippi. In 1961, he applied to the all-white University of Mississippi. He was initially accepted, but his admission was later withdrawn when the registrar discovered his race. Since all public educational institutions had been ordered to desegregate by this time (following 1954’s Brown v. Board of Education ruling), Meredith filed a suit alleging discrimination. Although the state courts ruled against him, the case made its way to the U.S. Supreme Court, which ruled in his favor. 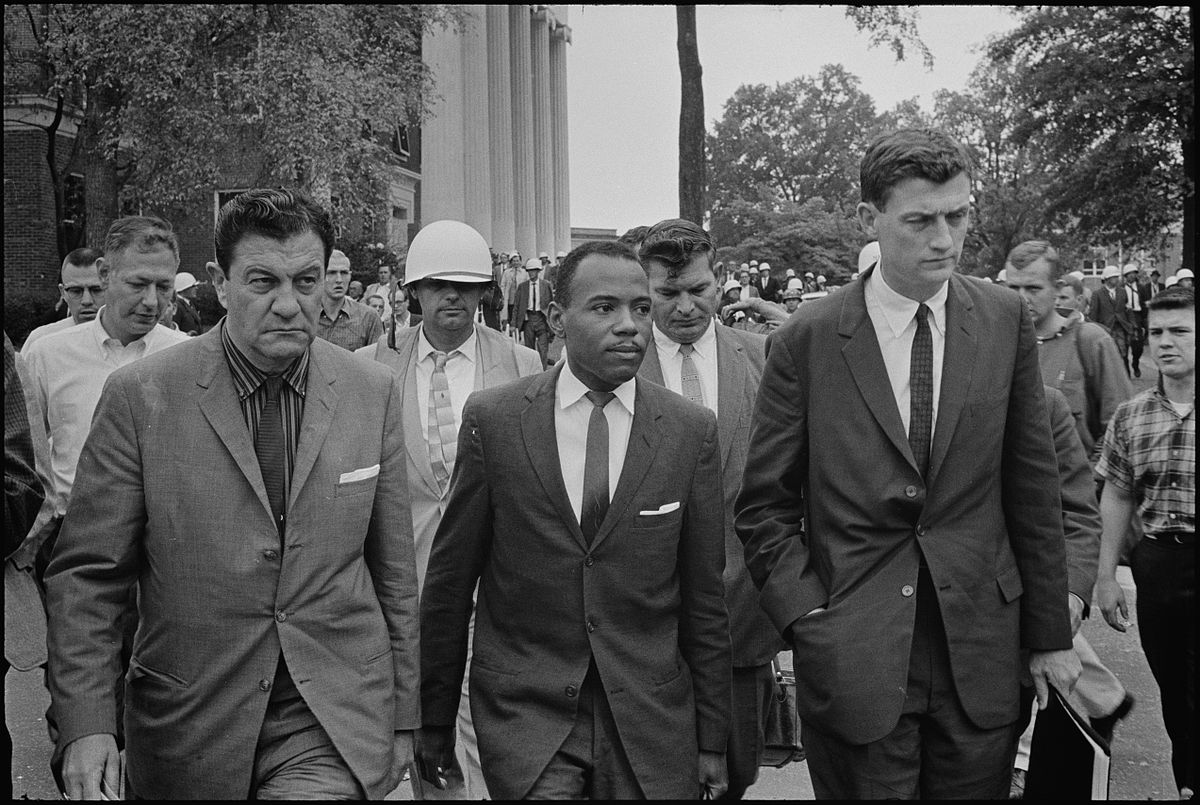 When Meredith arrived at the university to register for classes on September 20, 1962, he found the entrance blocked. Rioting soon erupted, and Attorney General Robert Kennedy sent 500 U.S. Marshals to the scene. Additionally, President John F. Kennedy sent military police, troops from the Mississippi National Guard, and officials from the U.S. Border Patrol to keep the peace. On October 1, 1962, James Meredith became the first black student to enroll at the University of Mississippi.
In 1963, Meredith graduated with a degree in political science. He wrote an account of his experience, titled Three Years in Mississippi, which was published in 1966. That June, he was in Memphis, Tennessee, on a solo march through the South to encourage black voters when he was shot and wounded by a white unemployed hardware clerk named Aubrey James Norvell, who was apprehended and sentenced to five years in prison. (He would ultimately serve just 18 months.) However, Meredith eventually recovered from his injuries and went on to receive a master’s degree in economics from the University of Ibadan in Nigeria and a law degree from Columbia University in 1968.
Becoming active in the Republican Party, in 1967 Meredith unsuccessfully ran for Adam Clayton Powell Jr.’s seat in the U.S. House of Representatives. In 1972 he ran for a seat in the Senate, losing to Democratic incumbent James Eastland. Despite these losses, Meredith remained active in politics and from 1989 to 1991 served as a domestic adviser to Jesse Helms, despite the senator’s poor history regarding civil rights.
In 1956 Meredith married Mary June Wiggins while serving in the U.S. military. They would have three sons before Mary died in 1979. The following year, Meredith married Judy Alsobrooks, with whom he has one son and a daughter. They live in Jackson, Mississippi. In recent years, Meredith has continued to be active in civil rights and education issues, particularly through his nonprofit organization, the Meredith Institute. He has also authored several books, including the children’s book Will Wadsworth’s Train to Nowhere (2010) and the memoir A Mission from God (2012).
previous post