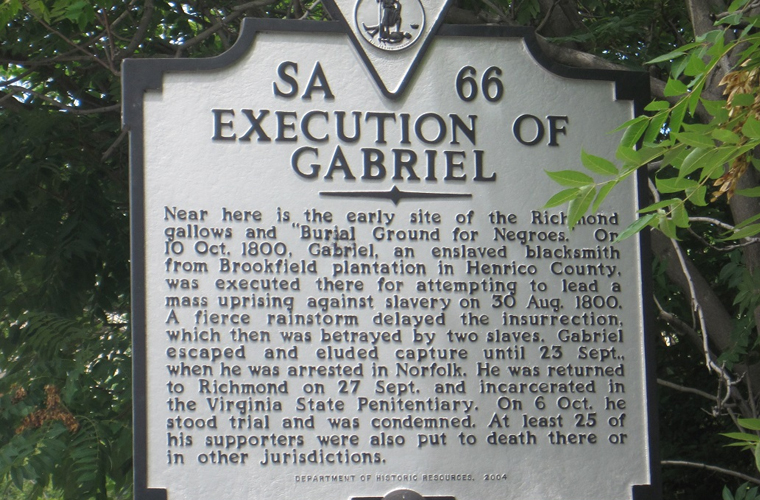 GABRIEL’S INSURRECTION, a slave uprising in Virginia in 1800. The democratic ideals expressed in the slogan of the French Revolution (1789)—”liberty, equality, fraternity”—resonated in France’s Caribbean colonies. In Saint Domingue, slaveholders were slaughtered in the successful 1791 slave uprising led by the freed slave Toussaint Louverture. This led to the liberation of all slaves in that colony in 1793. Hundreds of French plantation owners fled to the United States, bringing with them thousands of slaves who had been exposed to the ideas of democracy. This made many American plantation owners nervous, including Virginians like Thomas Jefferson. Although a discourse, led by prominent Virginians, about natural rights and the duty of a regime to represent all its people had become prevalent following the American Revolution, many Virginians were increasingly fearful of slaves asserting their claim to equal human rights.

As the growing demand for cotton brought more slaves directly from Africa to Virginia, fugitive laws were tightened in order to deter and punish escaped slaves. The concomitant existence of free blacks further destabilized the social hierarchy. Furthermore, growing literacy and knowledge of the ideas that informed the American Revolution made Virginia a restive place at the turn of the nineteenth century. Ideas of democracy and freedom spread among many black urban artisans. They sought the abolition of slavery, freedom of movement, and better wages. These streams of resistance, American civic nationalism, and an emerging African American lower-middle class converged in Gabriel Prosser. He was a slave blacksmith seeking freedom by the only means he deemed plausible: violence against the merchants who oppressed laborers and the institutions of government that disenfranchised his people.

Gabriel recruited and organized a group of urban artisans and plantation workers, including his own brother and two white Frenchmen, planning to march an army on Richmond, Virginia, under the banner “Death or Liberty.” He devised a military strategy to outmaneuver his enemies: they would occupy the treasury and the arsenal and capture the governor; this would unleash waves of support from poor whites, and any opponents (other than Quakers, Methodists, and Frenchmen, since they were “friendly to liberty”)would be killed.

A hundred and fifty soldiers gathered near Richmond on the night of 30 August 1800, expecting hundreds of men to join their ranks. Heavy rain caused delay, and several conspirators betrayed the plan. The local militia crushed the troops. Scores, including Gabriel, were hanged; the rest were sold to slavery outside Virginia. Most memorable were the last words of a condemned man: “I have ventured my life in endeavoring to obtain the liberty of my countrymen, and I am a willing sacrifice to their cause.”

Jefferson was elected president of the United States later the same year. Other sporadic insurrections heightened fears that previously docile slaves would overthrow white rule. This attitude was a setback to abolitionism, and led to a growing interest in removing blacks from U.S. soil, giving rise to various schemes by the American Colonization Society to resettle them in places such as Liberia.