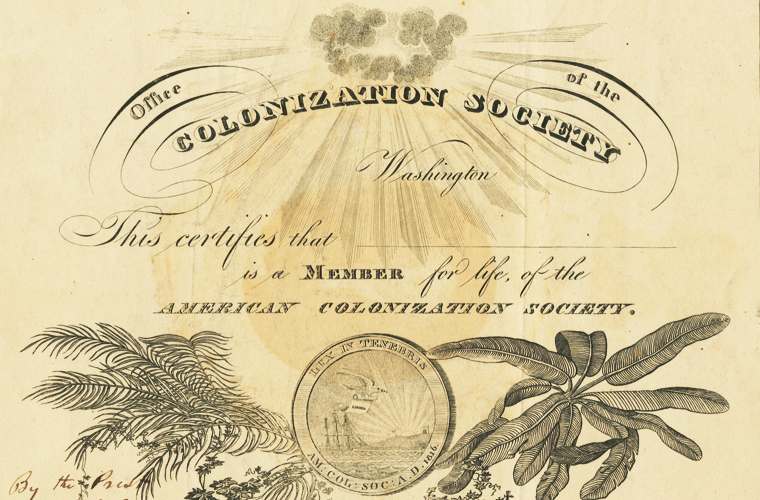 The American Colonization Society was an organization formed in 1816 with the purpose of transporting free blacks from the United States to settle on the west coast of Africa. During the decades the society operated more than 12,000 people were transported to Africa and the African nation of Liberia was founded. The idea of moving blacks from America to Africa was always controversial. Among some supporters of the society, it was considered a benevolent gesture.

But some advocates of sending blacks to Africa did so with obviously racist motives, as they believed that blacks, even if freed from slavery, were inferior to whites and incapable of living in American society. And many free blacks living in the United States were deeply offended by the encouragement to move to Africa. Having been born in America, they wanted to live in freedom and enjoy the benefits of life in their own homeland.

The Founding of the American Colonization Society
The idea of returning blacks to Africa had developed in the late 1700s, as some Americans came to believe that the black and white races could never live together peacefully. But the practical idea for transporting blacks to a colony in Africa originated with a New England sea captain, Paul Cuffee, who was of Native American and African descent. Sailing from Philadelphia in 1811, Cuffee investigated the possibility of transporting American blacks to the west coast of African. And in 1815 he did take 38 colonists from America to Sierra Leone, a British colony on the west coast of Africa.

Cuffee’s voyage seems to have been an inspiration for the American Colonization Society, which was officially launched at a meeting at the Davis Hotel in Washington, D.C. on December 21, 1816. Among the founders were Henry Clay, a prominent political figure, and John Randolph, a senator from Virginia.

The organization gained prominent members. Its first president was Bushrod Washington, a justice on the U.S. Supreme Court who owned slaves and had inherited a Virginia estate, Mount Vernon, from his uncle, George Washington.

Most members of the organization were not actually slave owners. And the organization never had much support in the lower South, the cotton-growing states where slavery was essential to the economy.

Recruitment for Colonization Was Controversial
The society solicited funds to buy the freedom of slaves who could then emigrate to Africa. So part of the organization’s work could be viewed as benign, a well-meaning attempt to end slavery.

However, some supporters of the organization had other motivations. They were not concerned about the issue of slavery so much as the issue of free blacks living in American society. Many people at the time, including prominent political figures, felt blacks were inferior and could not live with white people.

Some American Colonization Society members advocated that freed slaves, or free-born blacks, should settle in Africa. Free black people were often encouraged to leave the United States, and by some accounts, they were essentially threatened to leave.

There were even some supporters of colonization who saw the organizing as essentially protecting slavery. They believed that free blacks in America would encourage slaves to revolt. That belief became more widespread when former slaves, such as Frederick Douglass, became eloquent speakers in the growing abolitionist movement.

Prominent abolitionists, including William Lloyd Garrison, opposed colonization for several reasons. Besides feeling that blacks had every right to live freely in America, the abolitionists recognized that former slaves speaking and writing in America were forceful advocates for the ending of slavery. And abolitionists also wanted to make the point that free African Americans living peacefully and productively in society were a good argument against the inferiority of blacks and the institution of slavery.

Settlement in Africa Began in the 1820s
The first ship sponsored by the American Colonization Society sailed to Africa carrying 88 African Americans in 1820. A second group sailed in 1821, and in 1822 a permanent settlement was founded which would become the African nation of Liberia.

Between the 1820s and the end of the Civil War, approximately 12,000 black Americans sailed to Africa and settled in Liberia. As the slave population by the time of the Civil War was approximately four million, the number of free blacks transported to Africa was a relatively tiny number. A common goal of the American Colonization Society was for the federal government to become involved in the effort of transporting free African Americans to the colony in Liberia. At meetings of the group, the idea would be proposed, but it never gained traction in the Congress despite the organization having some powerful advocates.

One of the most influential senators in American history, Daniel Webster, addressed the organization at a meeting in Washington on January 21, 1852. As reported in the New York Times days later, Webster gave a typically stirring oration in which he asserted that colonization would be “best for the North, best for the South,” and would say to the black man, “you will be happier in the land of your fathers.”

The Concept of Colonization Endured
Though the work of the American Colonization Society never became widespread, the idea of colonization as a solution to the issue of slavery persisted. Even Abraham Lincoln, while serving as president, entertained the idea of creating a colony in Central America for freed American slaves.

Lincoln abandoned the idea of colonization by the middle of the Civil War. And before his assassination, he created the Freedmen’s Bureau, which would help former slaves become free members of American society following the war.
The true legacy of the American Colonization Society would be the nation of Liberia, which has endured despite a troubled and sometimes violent history.