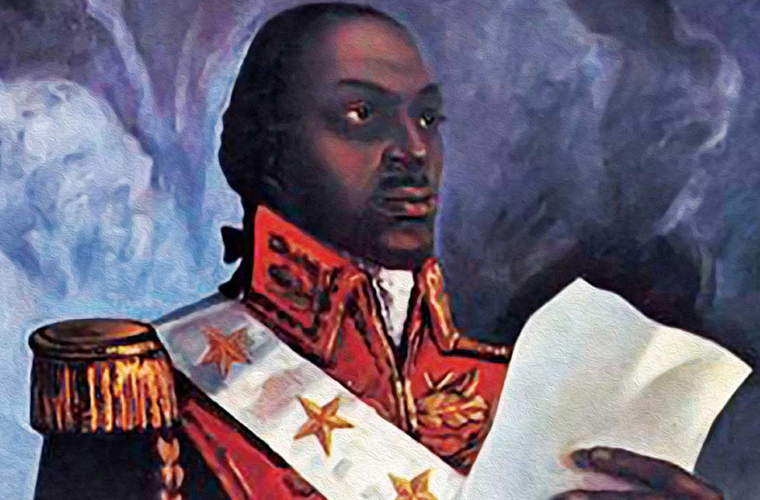 In the late 1790s Toussaint Louverture, a military leader and former slave, gained control of several areas and earned the initial support of French agents. He gave nominal allegiance to France while pursuing his own political and military designs, which included negotiating with the British, and in May 1801… Toussaint was the son of an educated slave; he acquired through Jesuit contacts some knowledge of French, though he wrote and spoke it poorly, usually employing Haitian Creole and African tribal language.

Winning the favor of the plantation manager, he became a livestock handler, healer, coachman, and finally steward. Legally freed in 1776, he married and had two sons. Toussaint was homely, short, and small-framed. He was a fervent Roman Catholic, opposed to Vodou (Voodoo). He dressed simply and was abstemious and a vegetarian. Although he slept little, his energy and capacity for work were astonishing. As a leader, he inspired awe and adulation.

When a sudden slave revolt began in the northern province (August 1791) and soon spread to encompass thousands of slaves across the colony, Toussaint was at first uncommitted. After hesitating for a few weeks, he helped his former master escape and then joined the black forces who were burning plantations and killing many Europeans and mulattoes (people of mixed African and European ancestry). He soon discerned the ineptitude of the rebel leaders and scorned their willingness to compromise with European radicals. Collecting an army of his own, Toussaint trained his followers in the tactics of guerrilla warfare. In 1793 he added to his original name the name of Louverture; the name’s exact significance is unknown, but its meaning in French, “opening,” may have referred to his tactical ability as a military commander.

When France and Spain went to war in 1793, the black commanders joined the Spaniards of Santo Domingo, the eastern two-thirds of Hispaniola (now the Dominican Republic). Knighted and recognized as a general, Toussaint demonstrated extraordinary military ability and attracted such renowned warriors as his nephew Moïse and two future monarchs of Haiti, Jean-Jacques Dessalines and Henry Christophe. Toussaint’s victories in the north, together with mulatto successes in the south and British occupation of the coasts, brought the French close to disaster. Yet, in May 1794, Toussaint went over to the French, giving as his reasons that the French National Convention had recently freed all slaves, while Spain and Britain refused, and that he had become a Republican. He has been criticized for the duplicity of his dealings with his onetime allies and for the slaughter of Spaniards at a mass. His switch was decisive: the governor of Saint-Domingue, Étienne Laveaux, made Toussaint lieutenant governor; the British suffered severe reverses, and the Spaniards were expelled.

By 1795 Toussaint Louverture was widely renowned. He was adored by blacks and appreciated by most Europeans and mulattoes, for he did much to restore the economy. Defying French Revolutionary laws, he allowed many émigré planters to return, and he used military discipline to force the former slaves to work. Convinced that people were naturally corrupt, he felt that compulsion was needed to prevent idleness. Yet the laborers were no longer whipped: they were legally free and equal, and they shared the profits of the restored plantations. Racial tensions were eased because Toussaint preached reconciliation and believed that blacks, a majority of whom were African-born, had to learn from Europeans and Europeanized mulattoes.

Though he worked well with Laveaux, Toussaint eased him out in 1796. Léger-Félicité Sonthonax, a terrorist French commissioner, allowed Toussaint to rule and made him governor-general. But the ascetic black general was repelled by the proposals of the European radical to exterminate the Europeans, and he was offended by Sonthonax’s atheism, coarseness, and immorality. After some devious maneuvers, Toussaint forced Sonthonax out in 1797. Next to go were the British, whose losses caused them to negotiate secretly with Toussaint, notwithstanding the war with France. Treaties in 1798 and 1799 secured their complete withdrawal. Lucrative trade was begun with Britain and with the United States. In return for arms and goods, Toussaint sold sugar and promised not to invade Jamaica or the American South.

The British offered to recognize him as king of an independent Haiti, but, scornful of pompous titles and distrustful of the British because they maintained slavery, he refused. Toussaint soon rid himself of another nominal French superior, Gabriel Hédouville arrived in 1798 as a representative of the Directory (the French Revolutionary government). Knowing that France had no chance of restoring colonialism as long as the war with England continued, Hédouville attempted to pit against Toussaint the mulatto leader André Rigaud, who ruled a semi-independent state in the south. Toussaint divined his purpose and forced Hédouville to flee. Succeeding Hédouville was Philippe Roume, who deferred to the black governor. Then a bloody campaign in 1799 eliminated another potential rival to Toussaint by driving Rigaud out and destroying his mulatto state. A purge that was carried out by Jean-Jacques Dessalines in the south was so brutal that reconciliation with the mulattoes was impossible.

Controlling all of Saint-Domingue, Toussaint turned to Spanish Santo Domingo, where slavery persisted. Ignoring commands to the contrary by Roume and by Napoleone Bonaparte, who had become the first consul of France, Toussaint overran it in January 1801, freed the slaves, and amazed the Europeans and mulattoes with his magnanimity.

In command of the entire island, Toussaint dictated a constitution that made him governor-general for life with near absolute powers. Catholicism was the state religion, and many revolutionary principles received an ostensible sanction. There was no provision for a French official, however, because Toussaint professed himself a Frenchman and strove to convince Bonaparte of his loyalty. He also described his success in restoring order and prosperity in epistles that, like all his writings, were ungrammatical yet testify to the grasp, incisiveness, and depth of a formidable intellect. Bonaparte had confirmed Toussaint Louverture’s position but saw him as an obstacle to the restoration of Saint-Domingue as a profitable colony. Toussaint knew Bonaparte despised blacks and planned to reinstitute slavery.

He was also aware that Bonaparte would seek to intimidate the island upon making peace with England; therefore, he drilled a huge army and stored supplies. Yet Toussaint behaved ambiguously: venerating France, fearing Bonaparte, aging and growing weary, he trusted no one and failed to clarify his purposes. He desired above all to prevent a restoration of slavery while preserving the society he had built. Europeans and mulattoes looked hopefully to France to repress the huge black majority; on the other hand, many black leaders, such as Moïse, wanted to expel all Europeans and divide the plantations. Some blacks were alienated by Toussaint’s perfidies and equivocations, his mysteriousness, and the occasional atrocities he thought necessary amid such dangers.

A French invasion under Gen. Charles Leclerc began in January 1802 in far greater force than expected. Most Europeans and mulattoes defected to him; after a few weeks of furious fighting, the chief black leaders, even Christophe and Dessalines, sided with Leclerc as well. In May Toussaint formally agreed to lay down his arms in exchange for Leclerc’s promise not to restore slavery.

Toussaint retired in honor of a plantation. A few weeks later, in June, he was invited to a parley by a French general, Jean-Baptiste Brunet, under false pretenses. With the cooperation of Leclerc and under orders from Napoleon, who suspected him of plotting an uprising, Toussaint was seized at Brunet’s home and sent to Fort-de-Joux in the French Jura Mountains, where he was confined and interrogated repeatedly and where he died in April 1803.