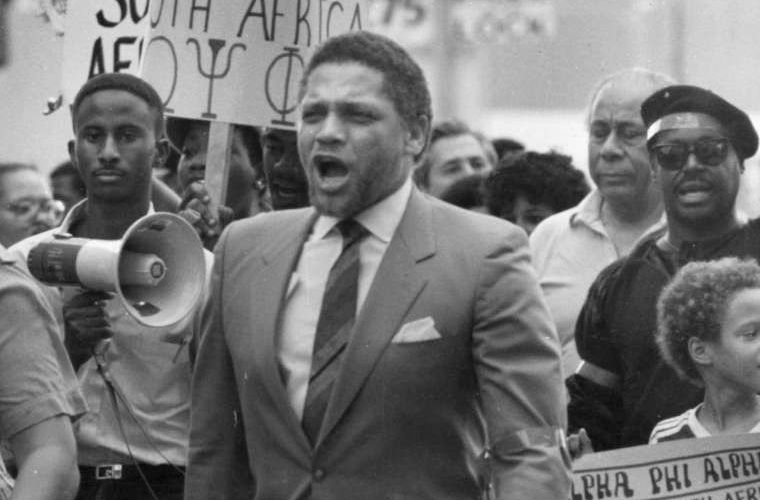 George Thomas “Mickey” Leland was America’s most effective spokesman for hungry people in the United States and throughout the world. During six terms in the Congress, six years as a Texas state legislator and, Democratic National Committee official, he focused much-needed attention on issues of health and hunger and rallied support that resulted in both public and private action. Leland combined the skills of the charismatic leader with the power of a sophisticated behind-the-scenes congressman. He matured during his years in Congress into a brilliantly effective and influential advocate for food security and health care rights for every human being. When Mickey Leland died in 1989, he was Chairman of the House Select Committee on Hunger. His committee studied the problems associated with domestic and international hunger and then delivered the practical solution for food.

Early Life and Education George Thomas “Mickey” Leland, III, was born on November 27, 1944, in Lubbock, Texas, to Alice and George Thomas Leland, II. At an early age, he, along with his mother and brother (William Gaston Leland), took up residence in the Fifth Ward of Houston, Texas.

Growing up in a predominately African American and Hispanic neighborhood, Leland’s first experience with the “public” was in a segregated public school. Leland showed early promise as a student, however. He ranked in the top ten percent of his class when he graduated in 1964 from Philis Wheatley High School in Houston, Texas. While attending TSU (Texas Southern University) in the late sixties, Leland emerged as a vocal leader of the local civil rights movement and brought national leaders of the movement to Houston. He graduated from Texas Southern University’s School of Pharmacy in 1970 with a Bachelor of Science in Pharmacy. He served as an Instructor of Clinical Pharmacy at his alma mater from 1970-71 and set up a “door to door” outreach campaign in low-income neighborhoods to inform people about their medical care options and to perform preliminary screenings. During the same period, Mickey Leland organized and led the Black Citizens Action Teams (“Black Cats”) to protest against police brutality.

Leland’s Political Career In 1972, Mickey Leland was elected to the Texas House of Representatives from the 88th District of Houston, Texas. He served in the Texas Legislature until 1978. In Austin, Leland became famous as the champion of health care rights for the poor. Leland was largely responsible for the passage of legislation that provided low-income consumers with access to affordable generic drugs. He also supported the creation of health care access through Health Maintenance Organizations (HMO’s). To accomplish his goals in Austin, he served on the Texas State Labor Committee, State Affairs Committee, Human Resources Committee, Legislative Council, and Subcommittee on Occupational and Industrial Safety. Leland was also elected Vice Chairman of the Joint Committee on Prison Reform. He was the first African-American legislator to serve on the Senate-House conference Committee as a member of the House Appropriations Committee.

Congressman Leland was elected in November 1978 to the United States House of Representatives from the 18th Congressional District of Houston, Texas. His Congressional district included the neighborhood where he had grown up, and he was recognized as a knowledgeable advocate for health, children and the elderly. His leadership abilities were quickly noted in Washington, and he was chosen Freshman Majority Whip in his first term, and later served twice as At-Large Majority Whip. Leland was re-elected to each succeeding Congress until his death in August 1989.

As he visited soup kitchens and makeshift shelters, he became increasingly concerned about the hungry and homeless. The work for which he is best remembered began when Leland co-authored legislation with Rep. Ben Gilman (R-NY) to establish the House Select Committee on Hunger. Speaker Thomas P. “Tip” O’Neil named Leland chairman when it was enacted in 1984. The Select Committee’s mandate was to “conduct a continuing, comprehensive study and review of the problems of hunger and malnutrition.”

Although it had no legislative jurisdiction, the committee, for the first time, provided a single focus for hunger-related issues. The committee’s impact and influence would stem largely from Congressman Leland’s ability to generate awareness of complex hunger alleviation issues and exert his personal moral leadership. In addition to focusing attention on issues of hunger, his legislative initiatives would create the National Commission on Infant Mortality, better access to fresh food for at-risk women, children and infants, and the first comprehensive services for the homeless.

Leland’s sensitivity to the immediate needs of poor and hungry people would soon make him a spokesman for hungry people on a far broader scale. Reports of acute famine in sub-Saharan Africa prompted Speaker O’Neil to ask Leland to lead a bipartisan Congressional delegation to assess conditions and relief requirements. When Leland returned, he brought together entertainment personalities, religious leaders and private voluntary agencies to create general public support for the Africa Famine Relief and Recovery Act of 1985. That legislation provided $800 million in food and humanitarian relief supplies. The international attention Leland had focused on the famine brought additional support for non-governmental efforts, saving thousands of lives.

Leland’s ability to reach out to others with innovative ideas and to gain support from unlikely sources was a key to his success in effectively addressing the problems of the poor and minorities. He met with both Pope John Paul II about food aid to Africa and with Fidel Castro about reuniting Cuban families. In Moscow as part of the first Congressional delegation led by a Speaker of the House in the post-Cold War era, he proposed a joint U.S. – Soviet food initiative to Mozambique. As chairman of the Black Caucus, Leland proudly presented the first awards the Caucus had ever given to a non-black, rock musician Bob Geldorf and news person Ted Koppel. Geldorf was honored for his Band Aid concert and fund-raising efforts for African famine victims and Koppel for his news stories on the African famine.

Minority Affairs Mickey Leland was a very effective promoter of responsible and realistic broadcast television and cable programming. Through widely publicized congressional hearings he aroused the nation’s conscience and reduced violence in children’s television programming. And he advocated ethnic diversity through Affirmative Action in broadcast employment, both on and off camera, and ownership. In particular, he worked to assure that all of the characters in the media avoided ethnic stereotypes and fairly portrayed the rich diversity that makes up the American public. When the federal government began to privatize federal assets, such as Conrail, Mickey Leland successfully included legislative language that required the participation of minority investment bankers in the negotiations.

Mickey Leland’s sincere concern for ethnic equality earned him a leadership position in politics. During 1985-86, Congressman Leland served as Chairman of the Congressional Black Caucus (CBC) for the 99th Congress. The CBC was created in 1971 with only 13 members. By 1987, the CBC had grown to 23 members. Leland was also a member of the Democratic National Committee (DNC) from 1976-85. He served as Chairman of the DNC’s Black Caucus from 1981-1985, and in that capacity, he served on the DNC’s Executive Committee.

World Hunger and Peace When running for re-election in 1988, Congressman Leland was quoted as saying, “This is my 10th year in Congress, and I want to go back.” He stated further, “The more influence I get, the more I can help the people of the 18th District, but also (people) throughout the country.” Leland was becoming increasingly successful in international human rights and world hunger issues. He fought against the injustice of South African Apartheid, and led successful boycotts against South Africa Airways and was instrumental in obtaining a congressional override of President Reagan’s veto of economic sanctions against South Africa.

He worked endlessly to solve the problems of domestic and international hunger and malnutrition. Mickey Leland fought hard to prevent food aid from being used as a political tool. He advocated communication with all governments, even those considered enemies, in order to further humanitarian goals and supported the right of U.S. citizens to provide humanitarian assistance to civilians of any nation. His successful initiatives expanded funding of primary health care in developing countries, including UNICEF’s child survival activities and Vitamin A programs supported by the U.S. Agency for International Development (USAID). Under Leland’s aegis, the Select Committee reemphasized the priority of hunger and the alleviation of poverty within the foreign assistance program of the United States. The committee successfully campaigned for expanding credit to the poorest individuals in low-income countries and the use of proceeds from the sale of donated U.S. commodities for health, education and other grass-roots development activities.

Mickey Leland died as he had lived, on a mission seeking to help those most in need. While leading another relief mission in 1989, to an isolated refugee camp, Fugnido, in Ethiopia, which sheltered thousands of unaccompanied children fleeing the civil conflict in neighboring Sudan, Leland’s plane crashed into a mountainside in Ethiopia. The force of the crash killed everyone aboard, including the Congressman, his chief of staff Patrice Johnson, and 13 other passengers from a number of government, humanitarian, and development organizations.