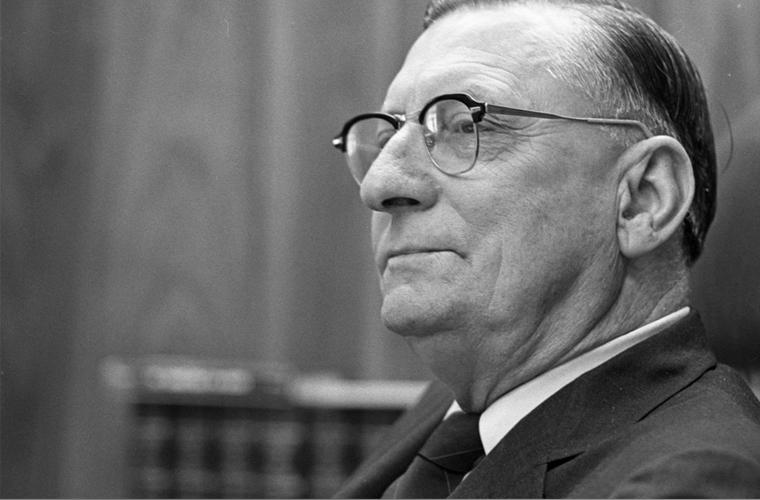 Ross Robert BARNETT (b. 22 January 1898 in Standing Pine, Mississippi; d. 6 November 1987 in Jackson, Mississippi), governor of Mississippi from 1960 to 1964 and a staunch segregationist who defied the federal government in September 1962 when he blocked the admission of James Meredith to the University of Mississippi.

Barnett was born in rural Leake County, Mississippi, the tenth child in a family he described as “poor, poor.” His father, John William Barnett, was a veteran of the Confederate Army, a cotton farmer, and a sawmill operator. His mother, Virginia Ann Chadwick, was a schoolteacher. He earned a B.A. from Mississippi College in 1922 and an LL.D. from the University of Mississippi School of Law in 1926. He supported himself in school as a janitor, barber, and traveling salesman of aluminum cookware, then established a successful legal practice in Jackson specializing in damage suits. In 1926 he married Mary Pearl Crawford. They had three children: Ross, Jr., Virginia, and Ouida. He was president of the Mississippi State Bar Association in 1943 and 1944.

In 1951 Barnett entered Mississippi’s Democratic gubernatorial primary, finishing fourth. He ran again in 1955 with the same result. In the 1959 primary, however, he was the largest vote-getter in a four-man field. Barnett’s success was largely due to support from the Citizens’ Council, an organization dedicated to the preservation of white supremacy. Barnett made no bones about his views. “God was the original segregationist,” he declared. “He made the white man white and the black man black, and he did not intend for them to mix.” During the run-off election, he attacked his opponent, Lieutenant Governor Carroll Gartin, for his “moderation” on racial issues. He defeated Gartin by 37,000 votes.

Much of Barnett’s term as governor was devoted to defending segregation. Each legislative session passed bills intended to frustrate federal desegregation moves and thwart the nascent civil rights movement. Most infamous was Senate Bill 1923, passed in 1960, permitting districts to close public schools if they were ordered to integrate. Unhappy with the Democratic Party’s civil rights plank, Barnett organized an unpledged slate that won Mississippi’s eight electoral votes in the 1960 presidential election.

During the Barnett administration, the Citizen’s Council enjoyed unprecedented access to state government. Council president Bill Simmons became an adviser to the governor on race relations. Barnett authorized direct payments of $5,000 per month to support the council’s programs and increased appropriations for the council-dominated Mississippi State Sovereignty Commission.

Barnett won a victory of sorts when the Freedom Riders arrived in Jackson on 24 May 1961 to test compliance with the 1960 Boynton v. Virginia ruling prohibiting segregated transportation facilities. The protestors were promptly arrested, convicted, and sent to prison. By avoiding bloodshed, Barnett avoided a direct confrontation with federal authorities and negative publicity for his state. 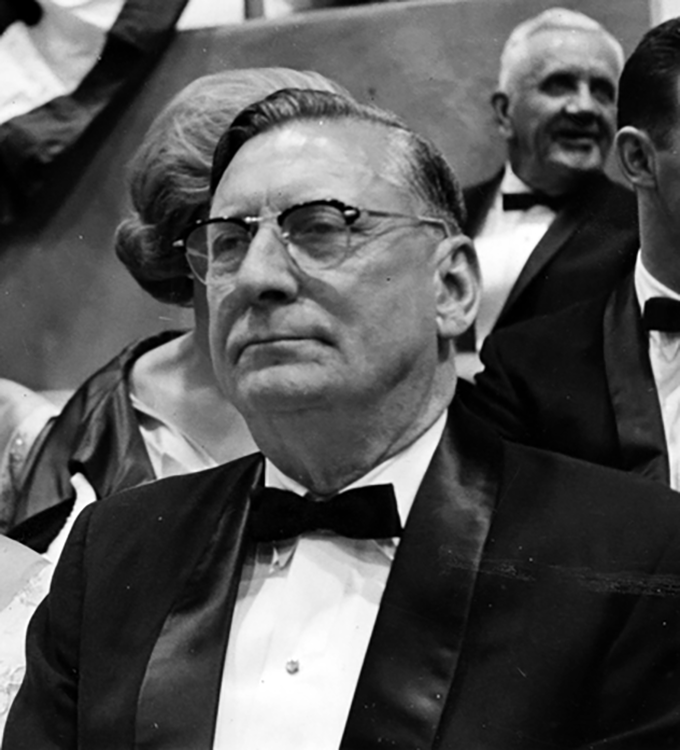 Barnett’s most notable clash with the federal government occurred in September 1962, when James Meredith attempted to matriculate at the University of Mississippi (Ole Miss). On 13 September Barnett urged Mississippians to resist the federal government: “I now call on every public official and every private citizen of our great state to join with me in refusing … to submit to the illegal usurpation of power by the Kennedy administration.” While Barnett was denouncing the government, he was engaged in secret negotiations with the White House, attempting to arrange a face-saving compromise.

On 20 September Barnett personally refused to enroll Meredith. Five days later, using the discredited legal doctrine of interposition, he blocked the door when Meredith arrived at the university trustees’ office in Jackson. The next day Lieutenant Governor Paul Johnson again rebuffed Meredith. The United States Court of Appeals for the Fifth Circuit then cited Barnett and Johnson for contempt of court.

On Saturday, 29 September, the Ole Miss football team faced the University of Kentucky at Memorial Stadium in Jackson. A capacity crowd of 41,000 Confederate flag-waving fans cheered wildly as Barnett strode to a microphone installed at midfield and delivered an emotional address: “I love Mississippi. I love her people—her customs. I love and respect her heritage.” With his arm extended and his fist clenched above his head, he was a picture of defiance.

The following day Meredith arrived on the Ole Miss campus. While President John F. Kennedy pleaded with Mississippians to refrain from violence, several thousand angry people massed in front of the Lyceum Building. The mob tossed rocks and bottles at federal marshals, who responded with tear gas. In the ensuing riot, two bystanders were killed and 375 persons were injured. Kennedy dispatched army troops and federalized Mississippi National Guardsmen to restore order. On 1 October Meredith was enrolled, becoming the university’s first known African-American student.

Barnett left the governor’s mansion and returned to the practice of law in 1964. When asked to list his accomplishments, he proudly pointed to the 440 industries located in Mississippi during his term. Barnett expressed few regrets: “Generally speaking, I’d do the same things again.” Barnett sought the Democratic gubernatorial nomination again in 1967 but finished fourth in the primary. He remained a popular figure in Mississippi, making speeches across the state and each August entertaining visitors at the Neshoba County Fair. He died of heart failure in 1987 and was buried in the family plot in Leake County.

Along with Orville Faubus of Arkansas and Alabama’s George Wallace, Barnett tried to turn back the tide of racial integration and preserve “the southern way of life.” Ironically, Barnett’s actions helped advance the cause he so fiercely opposed. By forcing a reluctant Kennedy to take decisive action, Barnett focused national attention on the Magnolia State and helped set in motion a chain of events that resulted in greatly expanded civil rights for African Americans.