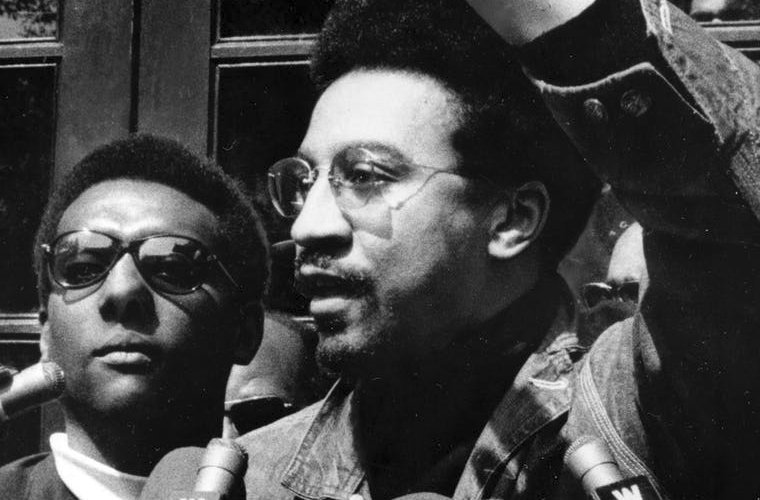 H. Rap Brown succeeded Stokely Carmichael as chairman of the Student Nonviolent Coordinating Committee (SNCC) and was a prominent figure in the Black Panther Party. A leading proponent of Black Power and a polarizing media icon, Brown symbolized both the power and the dangers—for white Americans and for radical activists themselves—of the civil rights movement’s new militancy in the late 1960s.

Brown was born in 1943 and raised in Baton Rouge, Louisiana.  In 1960 he joined the Non-Violent Action Group (NAG) and moved to Washington, D.C. In 1964 he became NAG chairman. His activities with NAG soon drew him to SNCC, which was then engaged in voter-registration drives in the Deep South. Brown quickly distinguished himself as a charismatic leader and effective organizer. He was appointed a director of voter registration for the state of Alabama in 1966 and replaced Carmichael as national chairman a year later.

As SNCC chairman, Brown’s rhetoric proved more militant and inflammatory than even Carmichael’s. At the same time, like Carmichael, he struggled to translate SNCC’s vision into concrete terms and programs. In large part, this was due to a paralyzing barrage of criminal charges levied by federal and state officials, from inciting a riot in Maryland to violating the National Firearms Act, to illegally crossing state lines, to skipping bail. During his firearms trial in 1970, Brown disappeared for seventeen months and was placed on the FBI’s “Ten Most Wanted” list. In late 1971 he re-emerged after being arrested on armed robbery charges in Manhattan, New York.  Convicted on the last charge, Brown served five years in Attica State Prison.

While in prison, Brown embraced Islam and changed his name to Jamil Abdullah Al-Amin. Following his release, he settled in Atlanta, Georgia where he started a mosque and operated a small grocery store and community center. Seemingly removed from the firestorms of his youth, Al-Amin’s life took another dramatic turn in 2000 when he was charged with murdering a black police officer and injuring his partner in a gun battle outside Al-Amin’s store. Despite some controversy surrounding the evidence, Al-Amin was convicted in 2002 and is currently serving a life sentence.