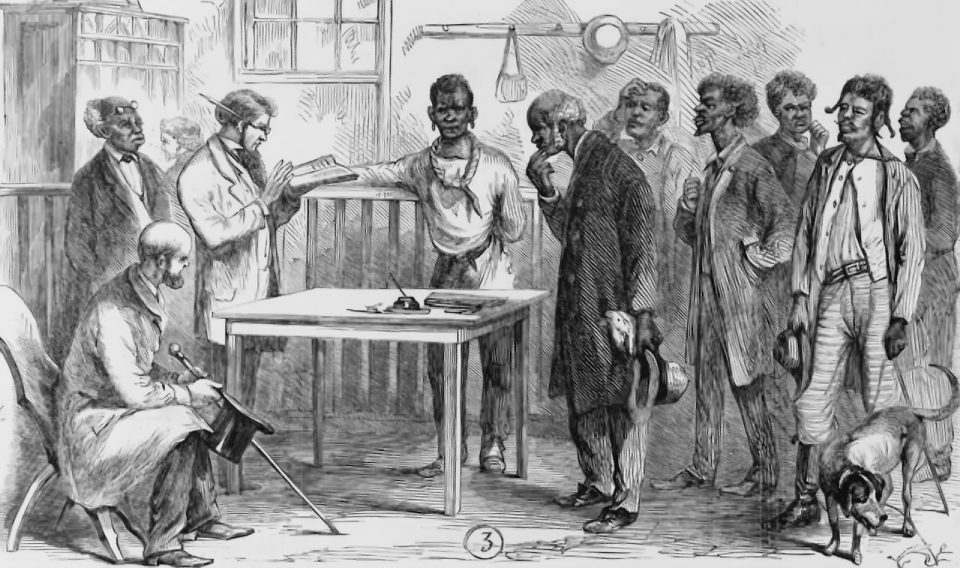 Passed by Congress on February 26, 1869, and ratified on February 3, 1870, the 15th Amendment granted African American men the right to vote.

To former abolitionists and to the Radical Republicans in Congress who fashioned Reconstruction after the Civil War, the 15th Amendment, enacted in 1870, appeared to signify the fulfillment of all promises to African Americans. Set free by the 13th amendment, with citizenship guaranteed by the 14th Amendment, Black males were given the vote by the 15th Amendment. In retrospect, it can be seen that the 15th Amendment was in reality only another step in the struggle for equality that would continue for more than a century before African Americans could begin to participate fully in American public and civic life.

African Americans exercised the right to vote and held office in many Southern states through the 1880s, but in the early 1890s, steps were taken to ensure subsequent “white supremacy.” Literacy tests for the vote, “grandfather clauses” excluding from the franchise all whose ancestors had not voted in the 1860s, and other devices to disenfranchise African Americans were written into the laws of former Confederate states.

Social and economic segregation was added to Black America’s loss of political power. In 1896, the Supreme Court decision Plessy v. Ferguson legalized “separate but equal” facilities for the races. For more than 50 years, the overwhelming majority of African American citizens were reduced to second-class citizenship under the “Jim Crow” segregation system. During that time, African Americans sought to secure their rights and improve their position through organizations such as the National Association for the Advancement of Colored People and the National Urban League and through the individual efforts of reformers like Booker T. Washington, W.E.B. DuBois, and A. Philip Randolph.

The most direct attack on the problem of African American disenfranchisement came in 1965. Prompted by reports of continuing discriminatory voting practices in many Southern states, President Lyndon B. Johnson, himself a southerner, urged Congress on March 15, 1965, to pass legislation “which will make it impossible to thwart the 15th Amendment.” He reminded Congress that “we cannot have a government for all the people until we first make certain it is the government of and by all the people.”

The Voting Rights Act of 1965, extended in 1970, 1975, and 1982, abolished all remaining deterrents to exercising the right to vote and authorized federal supervision of voter registration where necessary. In 2013, the Supreme Court struck down a key provision of the act involving federal oversight of voting rules in nine states.