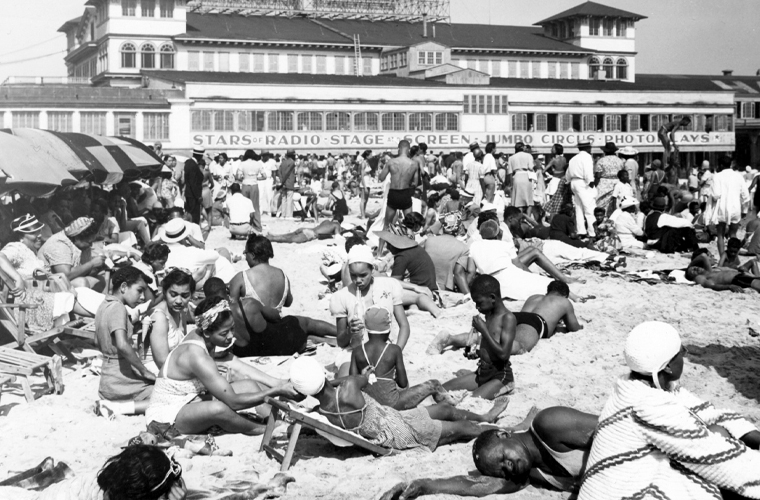 Chicken Bone Beach, more formally known as Missouri Avenue Beach in New Jersey, was established because hotels did not want blacks to mingle with white tourists. African Americans were socially restricted to use the Missouri Avenue Beach Area. The beach was not far from the Northside, the city’s black neighborhood, where from the 1920s to the 1960s the Kentucky Avenue nightclubs created a lively scene that featured nationally known black entertainers, musicians, and comedians.

Black visitors endured discrimination of all types, including food choices. Out-of-town visitors often took a lot of food to the beach. Since fried chicken did not spoil in the heat and bones were regularly found during cleanup, the locals gave the area a nickname, “Chicken Bone Beach.” The beach was constantly full with people, just as it is today. People visited by the busloads to spend time them, as they were drawn by the entertainment, the then-illegal gambling, as well as just walking along the boardwalk.

Famous people such as “Moms” Mabley, Martin Luther King Jr., and Sammy Davis Jr., often visited and were restricted as well. Black lifeguards kept to the “restricted” area and were not allowed to help anyone outside the area. It was estimated that as many as 5,000 swimmers were assisted by the patrol of six lifeguards, headed by the first Black captain, William “Rube” Albouy, from 1947 to 1955. There were white lifeguards who were “punished” in the 1960s by being assigned to Chicken Bone Beach; however, many of them enjoyed their assignment. Chicken Bone Beach remained a black-only beach until the Civil Rights Act was passed in 1964.