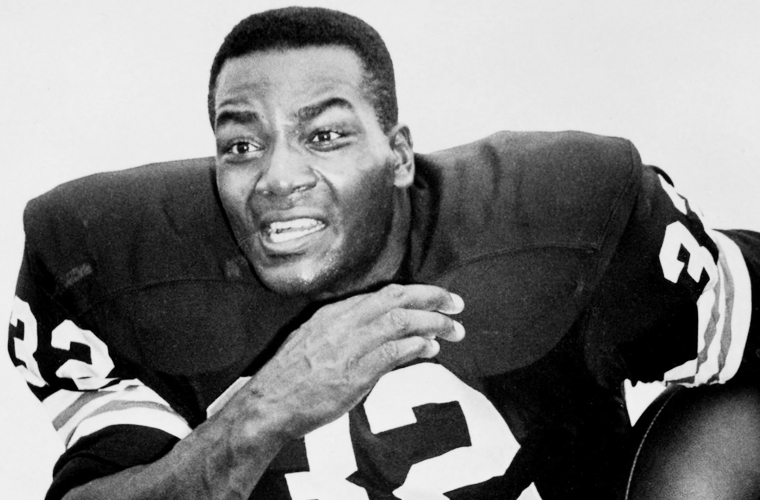 Jim Brown, byname of James Nathaniel Brown, (born February 17, 1936, St. Simons, Georgia, U.S.), outstanding American professional gridiron football player who led the National Football League (NFL) in rushing for eight of his nine seasons. He was the dominant player of his era and was considered one of the best running backs of all time. He later found success as an actor.

In high school and at Syracuse University in New York, Brown displayed exceptional all-around athletic ability, excelling in basketball, baseball, track, and lacrosse as well as football. In his final year at Syracuse, Brown earned All-America honors in both football and lacrosse. Many considered Brown’s best sport to be lacrosse, and he was inducted into both the Pro Football Hall of Fame and the U.S. Lacrosse National Hall of Fame.

At the close of his career, he had scored 126 touchdowns, 106 by rushing, had gained a record 12,312 yards in 2,359 rushing attempts for an average of 5.22 yards, and had a record combined yardage (rushing along with pass receptions) of 14,811 yards. Brown’s rushing and combined yardage records stood until 1984 when both were surpassed by Walter Payton of the Chicago Bears.

At 30 years of age and seemingly at the height of his athletic abilities, Brown retired from football to pursue an acting career. He appeared in many actions and adventure films, among them The Dirty Dozen (1967) and 100 Rifles (1969) as well as the blaxploitation movies Slaughter (1972) and Three the Hard Way (1974). In addition, he was cast in such comedies as Mars Attacks! (1996) and She Hates Me(2004) and made frequent television appearances. Brown was also active in issues facing African Americans, forming groups to assist black-owned businesses and rehabilitate gang members.

Throughout his career, Brown had various run-ins with the law, many of which involved allegations of domestic violence. In 1999 he was found guilty of vandalizing his wife’s car. Although offered probation if he followed the court’s requirements, which included counseling, Brown refused and instead served nearly four months in prison in 2002. That year Jim Brown: All American, a documentary directed by Spike Lee, was released. The autobiography Out of Bounds (written by Steve Delsohn) was published in 1989.