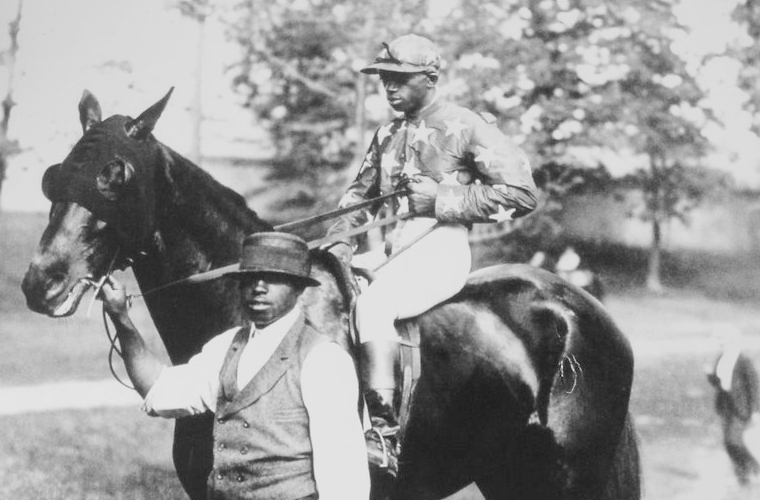 In 1898 Winkfield’s first race ended quickly with a four-horse tumble out of the gate that earned him a one-year suspension. On his return, he soon made up for his earlier mistake and earned four consecutive rides in the Kentucky Derby, where he finished third, first, first, and second from 1900 through 1903. In 1901 alone he won some 160 races, but he received little notice within or outside the horse-racing community. In 1903 he rode in what was then the richest race in the United States, the Futurity Stakes in New York City. Already scheduled to ride for his usual stable in the race, he accepted a $3,000 offer to ride for another owner instead. His reputation was tarnished, and the number of his rides dropped by a third in 1903.

With his career in trouble, racetracks closing around the country because of new anti-gambling legislation (down from 314 racetracks in 1890 to 25 by 1908), and racial discrimination curtailing opportunities for work, Winkfield left the United States in 1904 to accept a position with an American-owned stable operating in Poland and Russia. (Many veteran American jockeys extended their careers in Europe, where heavier riding weights prevailed.) In his first season he won the Emperor’s Purse in Russia and the “Tsarist Triple Crown”—the Moscow, St. Petersburg, and Warsaw derbies—and he was the 1904 Russian national riding champion. Beginning in 1909, he rode in Austria and Germany for a Polish prince and a German baron, notably winning the 1909 Grosser Preis von Baden in Germany. In 1913 he returned to Russia, where he earned 25,000 rubles a year plus 10 percent of all purses. At his peak, he earned roughly 100,000 rubles per year.

In 1919 the effects of the Russian Revolution reached him in Odessa, and, together with a Polish nobleman, he led the southern Russian racing colony, along with 200 Thoroughbreds, on a hazardous escape to Poland. By 1920 Winkfield had reached Paris, where he resumed racing and won the Prix du Président de la République. He soon met and married an exiled Russian aristocrat, and he retired in 1930 to concentrate on breeding and training racehorses on property he bought near Maisons-Laffitte. Altogether, he had won approximately 2,600 races in the United States, Russia, Germany, Austria, France, Italy, and Spain.

Like other African American jockeys of his era, Winkfield was largely forgotten after his retirement. Efforts to recognize him in the United States were undermined by racial discrimination: in 1961 the National Turf Writers Association invited Winkfield to a banquet at a hotel in Louisville, Kentucky, that refused him entrance until others intervened. Winkfield was inducted into the hall of fame at the National Museum of Racing and Hall of Fame in 2004. The Jimmy Winkfield Stakes, an annual race, was first run in 2005 at Aqueduct Racetrack in Queens, New York.