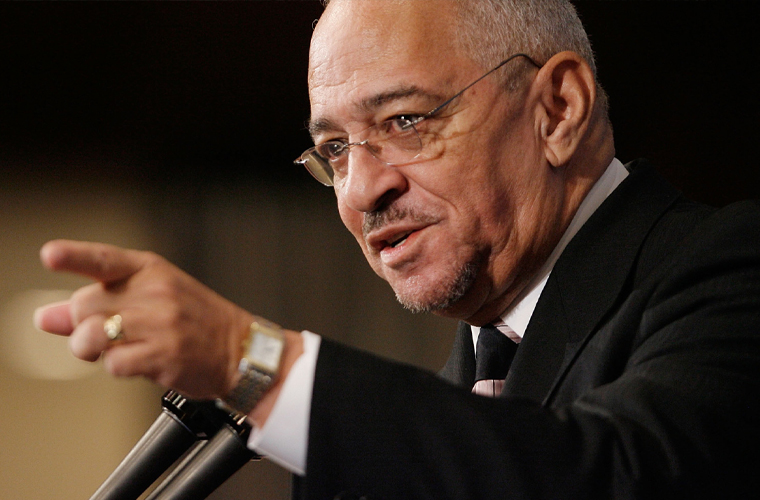 Jeremiah A. Wright, Jr. is an author and religious leader who was the longtime pastor for Trinity United Church of Christ. Born on September 22, 1941, in Philadelphia, Pennsylvania, Jeremiah A. Wright, Jr. served in the military and earned his ministerial degree before becoming pastor at Chicago’s Trinity United Church of Christ. His congregation grew by thousands with active community outreach. Though Wright was close to future President Barack Obama, the two split ways during the 2008 election amidst controversy. Jeremiah Alvesta Wright Jr. was born on September 22, 1941, in Philadelphia, Pennsylvania, and raised in a racially mixed section of Germantown.

Wright’s father, the Rev. Jeremiah Alvesta Wright, was pastor at Grace Baptist Church from 1938 to 1980. His mother, Mary Elizabeth Henderson Wright, was a schoolteacher. She was the first African American to teach at Germantown High and Philadelphia High School for Girls, where she became the school’s first black vice principal as well. Wright took an interest in religion at an early age. His parents challenged him to balance “the intellectual with the spiritual,” according to a Howard University biography.

In 1959, Wright graduated from Central High School, which was among the best schools in the area at the time and was 90 percent white. After high school, Wright attended Virginia Union College, a historically black school in Richmond. Wright, inspired by John F. Kennedy’s 1961 challenge to public service, gave up his student deferment to join the U.S. Marine Corps. He became part of the 2nd Marine Division with the rank of private first class.

After two years of service, Wright transferred to the U.S. Navy and entered the Corpsman School at the Great Lakes Naval Training Center. After graduating valedictorian, Wright was trained as a cardiopulmonary technician at the National Naval Medical Center in Bethesda, Maryland, graduating salutatorian.

Wright was assigned as part of the medical team charged with caring for U.S. President Lyndon B. Johnson. Indeed, Wright was photographed caring for Johnson after his 1966 surgery. The White House awarded Wright three letters of commendation before he left the position in 1967.

Following his military service, Wright earned bachelors and master’s degrees from the historically black Howard University in Washington. He earned a second master’s degree from the University of Chicago Divinity School. Wright also holds a doctor of ministry degree from the United Theological College in Dayton, Ohio, where he studied under the Rev. Samuel DeWitt Proctor, a mentor to Rev. Martin Luther King Jr  In 1972, Wright became pastor of the Trinity United Church of Christ in Chicago. At the time, the congregation on Chicago’s impoverished South Side had only 87 adult members. It now has about 8,000 (including Barack Obama since 1988), becoming the largest congregation in the liberal, mostly white United Church. Barack Obama first visited Wright’s church in 1988 when he was a community activist.

He joined Trinity United in 1992. Wright married Obama and his wife, Michelle, and baptized their two daughters. The Obamas and Wright would later split ways during Barack Obama’s 2008 presidential campaign, with the then-senator citing some of the statements made by Wright as harmful in tone and content. Wright is credited as well with creating 70 ministries, including prison, domestic violence, information technology, and Africa ministries. He is also known for taking on edgy topics in his sermons, including the income gap between whites and African Americans and the inaccuracy of African-American history taught in public schools. Wright also has written four books and composed songs for the Trinity Choral Ensemble, including “Jesus is His Name” and “God Will Answer Prayer.” He was named one of the country’s top black preachers by Ebony magazine in 1993.

Wright and his wife, Ramah Reed Wright, have four daughters and one son.