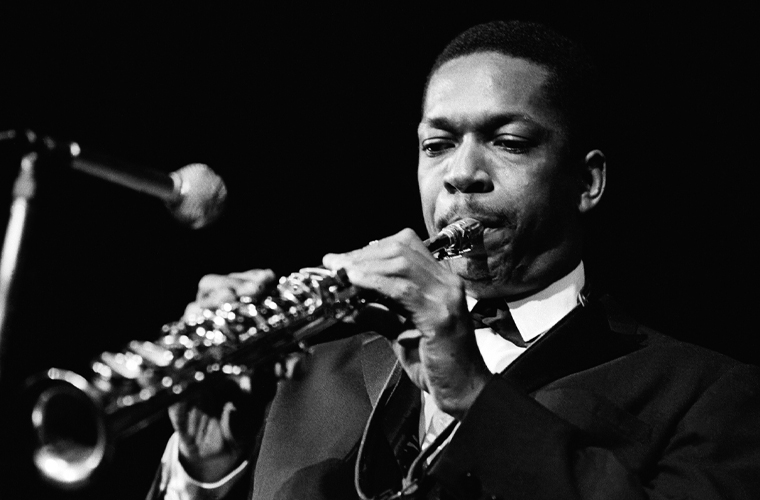 Coltrane’s first musical influence was his father, a tailor and part-time musician. John studied clarinet and alto saxophone as a youth and then moved to Philadelphia in 1943 and continued his studies at the Ornstein School of Music and the Granoff Studios. He was drafted into the navy in 1945 and played alto sax with a navy band until 1946; he switched to tenor saxophone in 1947. During the late 1940s and early ’50s, he played in nightclubs and on recordings with such musicians as Eddie (“Cleanhead”) Vinson, Dizzy Gillespie, Earl Bostic, and Johnny Hodges. Coltrane’s first recorded solo can be heard on Gillespie’s “We Love to Boogie” (1951).

Coltrane came to prominence when he joined Miles Davis’s quintet in 1955. His abuse of drugs and alcohol during this period led to unreliability, and Davis fired him in early 1957. He embarked on a six-month stint with Thelonious Monk and began to make recordings under his own name; each undertaking demonstrated a newfound level of technical discipline, as well as increased harmonic and rhythmic sophistication.

During this period Coltrane developed what came to be known as his “sheets of sound” approach to improvisation, as described by poet LeRoi Jones (later Amiri Baraka): “The notes that Trane was playing in the solo became more than just one note following another. The notes came so fast, and with so many overtones and undertones, that they had the effect of a piano player striking chords rapidly but somehow articulating separately each note in the chord, and its vibrating subtones.” Or, as Coltrane himself said, “I start in the middle of a sentence and move both directions at once.” The cascade of notes during his powerful solos showed his infatuation with chord progressions, culminating in the virtuoso performance of “Giant Steps” (1959).

Coltrane’s tone on the tenor sax was huge and dark, with a clear definition and full body, even in the highest and lowest registers. His vigorous, intense style was original, but traces of his idols Johnny Hodges and Lester Young can be discerned in his legato phrasing and portamento (or, in jazz vernacular, “smearing,” in which the instrument glides from note to note with no discernible breaks). From Monk, he learned the technique of multiphonics, by which a reed player can produce multiple tones simultaneously by using a relaxed embouchure (i.e., position of the lips, tongue, and teeth), varied pressure, and special fingerings. In the late 1950s, Coltrane used multiphonics for simple harmony effects (as on his 1959 recording of “Harmonique”); in the 1960s, he employed the technique more frequently, in passionate, screeching musical passages.

Coltrane returned to Davis’s group in 1958, contributing to the “modal phase” albums Milestones(1958) and Kind of Blue (1959), both considered essential examples of 1950s modern jazz. (Davis at this point was experimenting with modes—i.e., scale patterns other than major and minor.) His work on these recordings was always proficient and often brilliant, though relatively subdued and cautious.

After ending his association with Davis in 1960, Coltrane formed his own acclaimed quartet, featuring pianist McCoy Tyner, bassist Jimmy Garrison, and drummer Elvin Jones. At this time Coltrane began playing soprano saxophone in addition to tenor. Throughout the early 1960s, Coltrane focused on model-based improvisation in which solos were played atop one- or two-note accompanying figures that were repeated for extended periods of time (typified in his recordings of Richard Rodgers and Oscar Hammerstein’s “My Favorite Things”). At the same time, his study of the music of India and Africa affected his approach to the soprano sax. These influences, combined with a unique interplay with the drums and the steady vamping of the piano and bass, made the Coltrane quartet one of the most noteworthy jazz groups of the 1960s. Coltrane’s wife, Alice (also a jazz musician and composer), played the piano in his band during the last years of his life.

During the short period between 1965 and his death in 1967, Coltrane’s work expanded into a free, collective (simultaneous) improvisation based on prearranged scales. It was the most radical period of his career, and his avant-garde experiments divided critics and audiences.

Coltrane’s best-known work spanned a period of only 12 years (1955–67), but, because he recorded prolifically, his musical development is well-documented. His somewhat tentative, relatively melodic early style can be heard on the Davis-led albums recorded for the Prestige and Columbia labels during 1955 and ’56. Thelonious Monk and John Coltrane (1957) reveal Coltrane’s growth in terms of technique and harmonic sense, an evolution further chronicled in Davis’s albums Milestones and Kind of Blue.

Most of Coltrane’s early solo albums are of a high quality, particularly Blue Train (1957), perhaps the best-recorded example of his early hard bop style. Recordings from the end of the decade, such as Giant Steps (1959) and My Favorite Things (1960), offer dramatic evidence of his developing virtuosity. Nearly all of the many albums Coltrane recorded during the early 1960s rank as classics; A Love Supreme (1964), a deeply personal album reflecting his religious commitment, is regarded as an especially fine work. His final forays into avant-garde and free jazz are represented by Ascension and Meditations (both 1965), as well as several albums released posthumously.