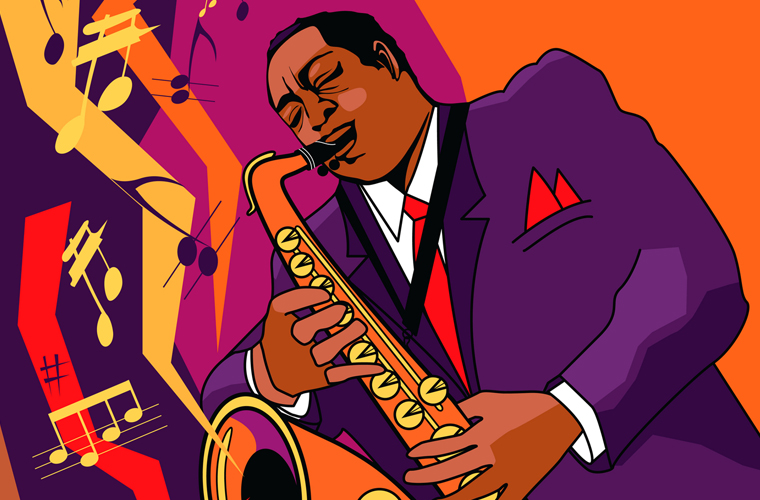 Jazz, musical form, often improvisational, developed by African Americans and influenced by both European harmonic structure and African rhythms. It was developed partially from ragtime and blues and is often characterized by syncopated rhythms, polyphonic ensemble playing, varying degrees of improvisation, often deliberate deviations of the pitch, and the use of original timbres.

Any attempt to arrive at a precise, all-encompassing definition of jazz is probably futile. Jazz has been, from its very beginnings at the turn of the 20th century, a constantly evolving, expanding, changing music, passing through several distinctive phases of development; a definition that might apply to one phase—for instance, to New Orleans style or swing—becomes inappropriate when applied to another segment of its history, say, to free jazz. Early attempts to define jazz as a music whose chief characteristic was improvisation, for example, turned out to be too restrictive and largely untrue, since composition, arrangement, and ensemble have also been essential components of jazz for most of its history. Similarly, syncopation and swing, often considered essential and unique to jazz, are in fact lacking in much authentic jazz, whether of the 1920s or of later decades. Again, the long-held notion that swing could not occur without syncopation was roundly disproved when trumpeters Louis Armstrong and Bunny Berigan (among others) frequently generated enormous swing while playing repeated, unsyncopated quarter notes.

Jazz, in fact, is not—and never has been—an entirely composed, predetermined music, nor is it an entirely extemporized one. For almost all of its history, it has employed both creative approaches in varying degrees and endless permutations. And yet, despite these diverse terminological confusions, jazz seems to be instantly recognized and distinguished as something separate from all other forms of musical expression. To repeat Armstrong’s famous reply when asked what swing meant: “If you have to ask, you’ll never know.” To add to the confusion, there often have been seemingly unbridgeable perceptual differences between the producers of jazz (performers, composers, and arrangers) and its audiences. For example, with the arrival of free jazz and other latter-day avant-garde manifestations, many senior musicians maintained that music that didn’t swing was not jazz.

Most early classical composers (such as Aaron Copland, John Alden Carpenter—and even Igor Stravinsky, who became smitten with jazz) were drawn to its instrumental sounds and timbres, the unusual effects and inflections of jazz playing (brass mutes, glissandos, scoops, bends, and stringless ensembles), and its syncopations, completely ignoring, or at least underappreciating, the extemporized aspects of jazz. Indeed, the sounds that jazz musicians make on their instruments—the way they attack, inflect, release, embellish, and color notes—characterize jazz playing to such an extent that if a classical piece were played by jazz musicians in their idiomatic phrasings, it would in all likelihood be called jazz.

Nonetheless, one important aspect of jazz clearly does distinguish it from other traditional musical areas, especially from classical music: the jazz performer is primarily or wholly a creative, improvising composer—his own composer, as it were—whereas in classical music the performer typically expresses and interprets someone else’s composition.