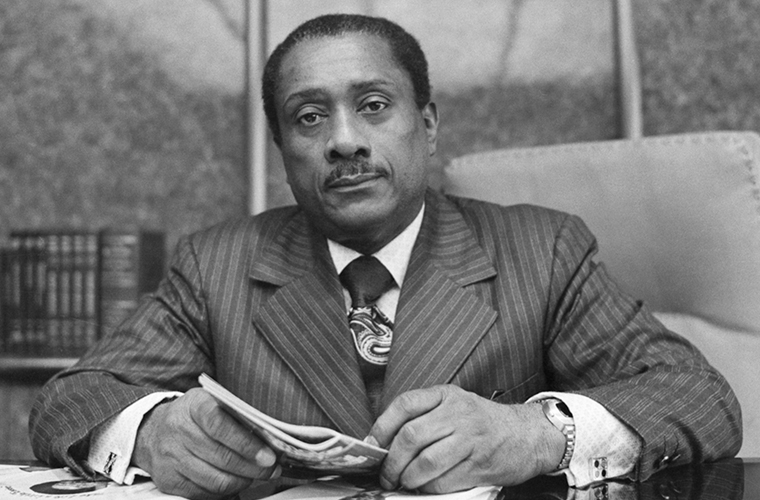 Born in Arkansas City, Arkansas on January 19, 1918, publisher, philanthropist, businessman, and entrepreneur, John H. Johnson became the leading 20th Century publisher of African American news magazines. Johnson moved to Chicago in 1932 where he attended school and graduated with honors in 1936.  He attended the University of Chicago and Northwestern University but did not complete his degree. Over his lifetime, Johnson received numerous honorary degrees, including five doctorates.

To oversee his publications Johnson created the Johnson Publishing Company in a small office in South Chicago and moved to a larger building in downtown Chicago in 1971.  One year later the Magazine Publishers Association elected Johnson “Magazine Publisher of the Year.” In 1982, Johnson became the first African American to appear on Forbes’s list of wealthiest Americans. Johnson’s empire eventually combined publishing, cosmetics, and insurance. In 1996 President Bill Clinton awarded Johnson the Presidential Medal of Freedom.

One of the largest black-owned businesses in the United States, Johnson Publishing Company was a major producer of African American magazines that focused on the accomplishments of black Americans. Providing a much-needed forum for black Americans and with a national scope, these magazines explored issues, reported events, and discussed people as they related to the needs and concerns of black Americans. Johnson became involved in politics and the civil rights movement. He supported Martin Luther King, Jr., thoroughly reported civil rights efforts, befriended Jesse Jackson, and was a benefactor of Howard University. Johnson encouraged and applauded African American successes while reporting their problems. His life, as he viewed it, can be glimpsed in his best-selling autobiography, Succeeding Against the Odds.   John H. Johnson died on August 8, 2005.