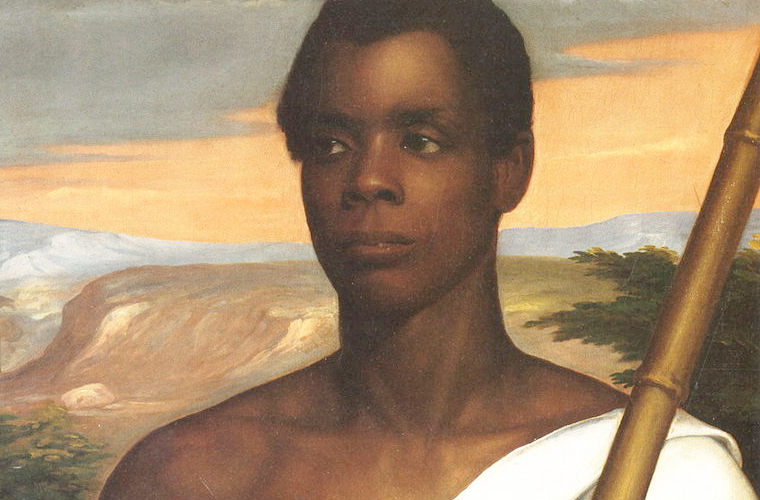 Joseph Cinque (ca. 1813-ca. 1879) was a West African who led a slave mutiny on the Cuban Amistad ship in 1839. It led to a celebrated trial in United States courts, which held that slaves escaping from illegal bondage should be treated as free men.

Joseph Cinque was born the son of a Mende headman in the village of Mani, in modern Sierra Leone. A rice farmer and trader, he was enslaved for debt and sold to the notorious Spanish slaver Pedro Blanco, on Lomboko Island at the mouth of the Gallinas River, in April 1839. Cinque was then carried to Havana, where he was resold with 51 others, many of them Mendians, and shipped aboard the coasting schooner Amistad bound for the Cuban sugar plantations near the port of Guanaja, Puerto Principe.

On June 30 Cinque incited the slaves to revolt at sea, killing the captain and cook and taking prisoner their owners, two merchants named Ruiz and Montez. Cinque tried to force Montez to pilot the vessel to Africa, but Montez reversed the course repeatedly, zigzagging up the North American coast. They were captured off Montauk Point, Long Island, by the U.S. Coast Guard vessel Washington and were brought to New London, where the ship, cargo, and rebellious slaves were claimed for salvage money, while Ruiz and Montez sought to regain possession of them.

President Van Buren and Secretary of State John Forsyth, sympathetic to the slaveholders’ claims and pressured by the Spanish government, tried to remove the case from the courts and transport the Africans to Cuba. But the Connecticut courts would not release them, and the plight of Cinque and his companions, jailed in New Haven, aroused abolitionist forces led by the New York merchant Lewis Tappan.

Cinque’s heroic figure and commanding personality lent itself to the drama, and he was widely lionized as a symbol of the abolitionist cause. The abolitionists argued that the Africans, illegally enslaved, were justified in revolting to regain freedom and were innocent of any true crime in killing their captors to achieve freedom. In a dramatic appeal before the Supreme Court in 1841, the 73-year-old former president John Quincy Adams charged the Federal government with wrongful interference in the courts and obstruction of justice through partiality for slaveholders and antipathy toward blacks. The Court’s decision, given on March 9, 1841, went for the abolitionists and set the Africans free.

Tappan and his associates then intended to found an African mission, using Cinque’s party as a nucleus. Once in Sierra Leone, however, the not ungrateful but independent-minded Africans clashed with their mentors and soon deserted the enterprise. Cinque established himself as an independent power and became, according to rumors, a successful slave trader himself. Years later, in 1879, he was reported to have reappeared, to die and be buried at the old mission on Sherbro Island.