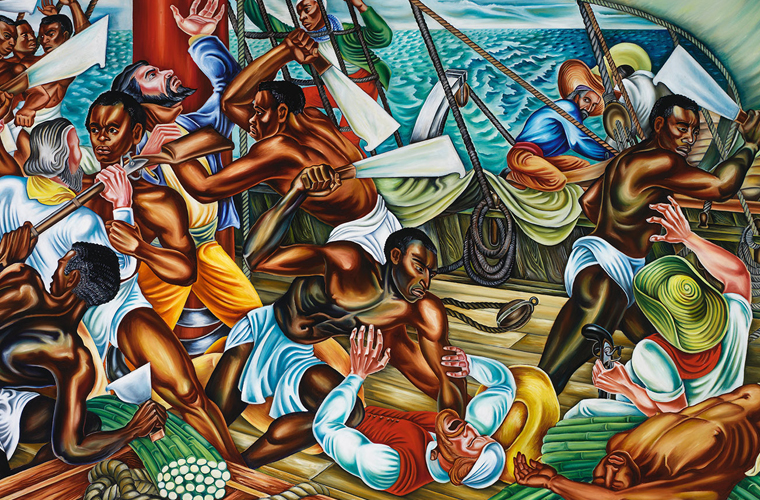 From the 16th to the 19th centuries, an estimated 12 million Africans were forcibly shipped across the Atlantic Ocean to the New World. Of those, at least 1.5 million are believed to have perished before even reaching the shore, done in by the horrid conditions onboard. By the time of the Amistad rebellion, the United States and all other major slave destinations in North and South America had abolished the importation of slaves. Yet since slavery itself remained legal in most of those places, unlawful activities abounded. Along the coast of present-day Sierra Leone, for example, Spanish slave trader Pedro Blanco—said to live partly like a European aristocrat and partly like an African king—continued doing brisk business with the help of a powerful local leader who rounded up his human cargo.

In February and March of 1839, the 53 Africans who would later find themselves on the Amistad arrived at Blanco’s slave depot, known as Lomboko, after being arduously marched there from Sierra Leone’s interior. Most of them had essentially been kidnapped, whereas others had been captured in warfare, taken as debt repayment or punished for such crimes as adultery. Kept in a slave barracks, they were stripped naked and thoroughly inspected from head to toe. Disease, famine, and beatings were purportedly commonplace. Then, after several weeks, they and 500 or so other captives were loaded onto the Tecora, a Brazilian or Portuguese slave ship. According to testimony that the Amistad captives gave later, they were shackled around the ankles, wrists, and neck and forced to sleep tightly together in contorted positions, with not enough headroom to even stand up straight. Whippings were handed out for even minor offenses, like not finishing breakfast, and each morning dead bodies were brought up from the lower deck and tossed into the ocean.

Following two months at sea, the Tecora landed in Havana, Cuba, then a Spanish colony, where potential buyers once again poked and prodded the surviving captives like livestock. Undeterred by the illegality of the transactions, José Ruiz purchased 49 adults and Pedro Montes purchased four children, with plans to bring them to sugar plantations a few hundred miles away in Puerto Príncipe (now Camagüey), Cuba. Ruiz and Montes, both Spaniards, then loaded the slaves onto the Amistad (which ironically means “Friendship” in Spanish). On June 28, the Amistad left Havana under the cover of nightfall so as to best avoid British antislavery patrols. Onboard, the captives continued suffering severe mistreatment, including the pouring of salt, rum, and gunpowder into freshly inflicted wounds. They developed a particular dislike for the cook, who delighted in insinuating that they would all be killed, chopped up and eaten.

Despite being from at least nine different ethnic groups, the Africans agreed one night to band together in revolt. Before dawn on July 2, they either broke or picked the locks on their chains. Led by Cinqué, a rice farmer also known as Joseph Cinqué or Sengbe Pieh, they then climbed up to the main deck, headed straight for the cook and bludgeoned him to death in his sleep. Though awakened by the tumult, the other four crewmembers, plus Ruiz and Montes, didn’t have time to load their guns. Grabbing a dagger and a club, the captain managed to kill one African and mortally wound another. But he was eventually slashed to death with cane knives the Africans had found in the ship’s hold. Two other crewmembers threw a canoe overboard and jumped into the water after it, whereas the cabin boy stayed out of the fighting altogether. Ruiz and Montes, meanwhile, were relieved of their weapons, tied up and ordered to sail back to Sierra Leone.

Having all grown up away from the ocean, the Africans depended on Ruiz and Montes for navigation. During the day, the two Spaniards set an eastward course, as they had been told to do. At night, however, they headed north and west in the hope of being rescued. After passing through the Bahamas, where the Amistad stopped on various small islands, it moved up the coast of the United States. News reports began to appear of a mysterious schooner, with an all-black crew and tattered sails, steering erratically. With little to drink onboard, dehydration and dysentery took a toll, and several Africans ended up dying. Finally, on August 26, a U.S. Navy brig ran into the Amistad off the eastern end of Long Island. Ruiz and Montes were freed at once, while the Africans were imprisoned in Connecticut, which, unlike New York, was still a slave state at the time.

As the Africans languished in poorly ventilated jail cells, thousands of curious visitors paid an admission fee to come to look at them. Media coverage was extensive, and by September 2 a New York City theater was already putting on a play entitled “The Long, Low Black Schooner.” Influential abolitionists helped secure the Africans a trial in a Hartford, Connecticut, federal district court. Yet they faced a formidable suite of opponents. The naval officers who captured the Amistad claimed salvage rights to both the vessel and its human cargo, as did two hunters who had come across some of the Africans looking for water along the Long Island shoreline. Ruiz and Montes likewise wanted their so-called property back, whereas the Spanish and U.S. governments requested that the Africans be returned to Cuba, where near-certain death awaited them. Believing the court would take his side, President Martin Van Buren sent a Navy ship to pick up the Africans and transport them away before the abolitionists could file an appeal.

Much to Van Buren’s chagrin, however, the Hartford court ruled in January 1840 that the Africans had been illegally brought to Cuba and that they, therefore, were not slaves. The Van Buren administration immediately appealed to a circuit court and then to the Supreme Court, basing its argument on a treaty between Spain and the United States that contained anti-piracy provisions. By then, the Africans had secured the legal services of former President John Quincy Adams, who defended their right to do battle for their freedom. Nicknamed “Old Man Eloquent,” Adams accused Van Buren of abusing his executive power and dramatically gestured to a courtroom copy of the Declaration of Independence to get his point across. In March 1841, the Supreme Court agreed with him, upholding the lower court in a 7-1 decision. After over 18 months of incarceration in the United States, not to mention the time spent as slaves, the Africans were finally free. To make matters even better, they learned that the British had destroyed Blanco’s Lomboko slave depot in a surprise raid.

In its decision, the Supreme Court cleared the U.S. government of any repatriation duties, and new President John Tyler declined to provide funds of his own accord. Salvage rights went to the naval officers; not to the Africans. As a result, abolitionists were forced to raise money from scratch for the journey back to Sierra Leone. When an African subsequently drowned in a possible suicide, the number of survivors fell to 35. At last, on November 26, 1841, they and five Christian missionaries boarded a boat, arriving at their destination about seven weeks later. A few of the Amistad rebels stayed with the missionaries, including the four children, who all took English names, but most apparently made a beeline for their families and vanished from the historical record.