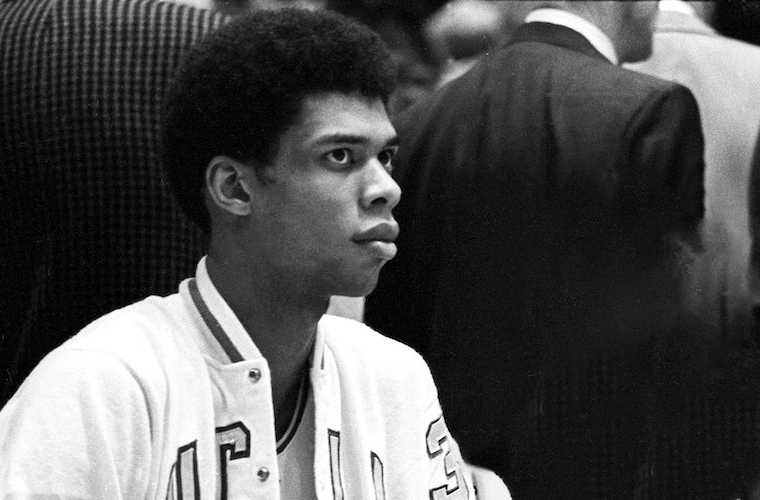 Alcindor played for Power Memorial Academy on the varsity for four years, and his total of 2,067 points set a New York City high-school record (that has since been broken). His offensive skill was so developed coming out of high school that the collegiate basketball rules committee, fearing he would be able to score at will, made dunking illegal prior to his enrollment at the University of California, Los Angeles (UCLA), in 1965. Despite the new rule, he set a UCLA scoring record with 56 points in his first game. Playing for renowned coach John Wooden, Alcindor helped lead UCLA to three National Collegiate Athletic Association championships (1967–69), and during his stay at UCLA, the team lost only two games. The no-dunking rule was rescinded in the years after Alcindor graduated.

Although Abdul-Jabbar lacked the physical strength of NBA centers Chamberlain and Willis Reed, he brought an excellent shooting touch to the position and a wide range of graceful post moves, including his sweeping, nearly indefensible sky hook. He also was an outstanding passer. Abdul-Jabbar retired at the end of the 1988–89 season, having been voted NBA Most Valuable Player a record six times. By the end of his extraordinarily long career, he had set NBA records for most points (38,387), most field goals made (15,837), and most minutes played (57,446). At the time of his retirement, Abdul-Jabbar had also amassed the most blocked shots in league history (3,189; since broken by Hakeem Olajuwon and Dikembe Mutombo) and the third most career rebounds (17,440). He was elected to the Naismith Memorial Basketball Hall of Fame in 1995 and was named one of the 50 greatest players in NBA history in 1996.

Away from the basketball court, Abdul-Jabbar pursued interests in acting and writing. He appeared on television and in a handful of films, including a memorable turn as a copilot in the comedy Airplane! (1980). His autobiography, Giant Steps, was published in 1983. His writings on the African American experience also included Black Profiles in Courage: A Legacy of African-American Achievement (1996; with Alan Steinberg), Brothers in Arms: The Epic Story of the 761st Tank Battalion, WWII’s Forgotten Heroes (2004; with Anthony Walton), On the Shoulders of Giants: My Personal Journey Through the Harlem Renaissance (2007; with Raymond Obstfeld), and the children’s book What Color Is My World?: The Lost History of African-American Inventors (2012; with Obstfeld).

In addition, he wrote Coach Wooden and Me: Our 50-Year Friendship on and off the Court (2017) as well as a mystery series (with Anna Waterhouse) about Sherlock Holmes’s older brother, Mycroft: Mycroft Holmes (2015) and Mycroft and Sherlock (2018). Abdul-Jabbar also did some basketball coaching and consulting, including a stint on the White Mountain Apache Reservation in Arizona. In 2016 he was awarded the Presidential Medal of Freedom.