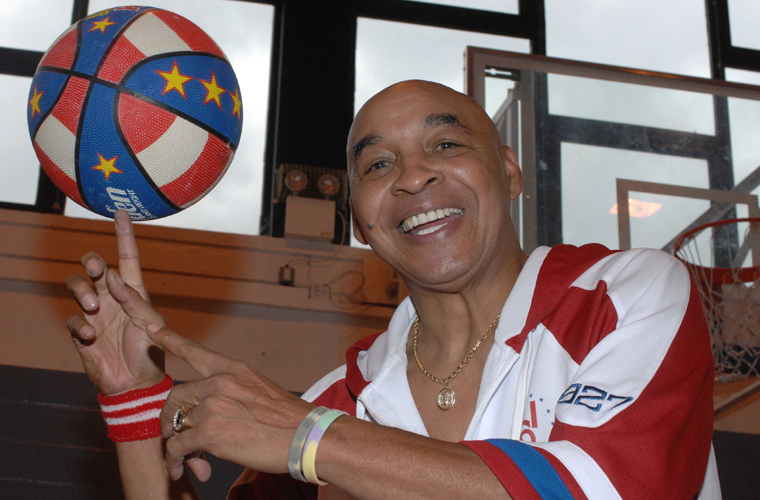 Fred “Curly” Neal was a basketball legend for the world-famous Harlem Globetrotters and became a global icon while representing the sport around the world. During his 22-year career with the Harlem Globetrotters, Neal played more than 6,000 basketball games in 97 countries. He adopted the nickname “Curly” because of his iconic bald head and warm personality that won over the hearts of many basketball fans. While Neal’s basketball skills elevated him to celebrity status, his ability to make people smile is what defines the former basketball legend.

Neal’s love for basketball began early and lasted throughout his life. Born and raised in Greensboro, North Carolina, he attended Greensboro-Dudley High School where he became a highly regarded player. From 1959 to 1963 Neal played college basketball at Johnson C. Smith University. Here he averaged 23.1 points per game. Toward the end of his collegiate career, Neal led his team to the CIAA championship. Immediately following graduation, he joined the world-famous Harlem Globetrotters. One of his first actions was to shave his head. This bold move earned him the nickname “Curly” referencing the classic “Three Stooges” character. Throughout his tenure with the Harlem Globetrotters, Neal’s mesmerizing dribbling skills and his ability to consistently make shots from past half-court characterized his legendary playing career.

In 1985, Fred “Curly” Neal retired from the Harlem Globetrotters. His involvement, however, led to a myriad of other ventures. In addition to his appearance on popular television programs and shows such as ABC’s Wide World of Sports and Scooby Doo, Neal also appeared in several commercials and made guest appearances with NBA programming. He also held positions as the Director of Special Projects for the Orlando Magic, Public Relations for the Harlem Globetrotters, and Spokesperson for Siemens Corporation. In the 1991-1992 basketball season, Neal invested and starred in the NBA’s “Stay in School” initiative encouraging middle school students to avoid drugs. His work with the “Stay in School” program influenced over 50,000 students in Central Florida.

On February 15, 2008, Curly Neal’s iconic jersey number 22 was retired to the rafters of Madison Square Garden. He became only the fifth Globetrotter ever to have his jersey retired joining Wilt Chamberlain, Marques Haynes, Meadowlark Lemon, and Goose Tatum. In the same year, Neal was also inducted into the North Carolina Sports Hall of Fame alongside legendary coach Roy Williams. Even after his basketball career ended, Neal continued to bring joy to fans everywhere by making appearances on behalf of the Harlem Globetrotters.