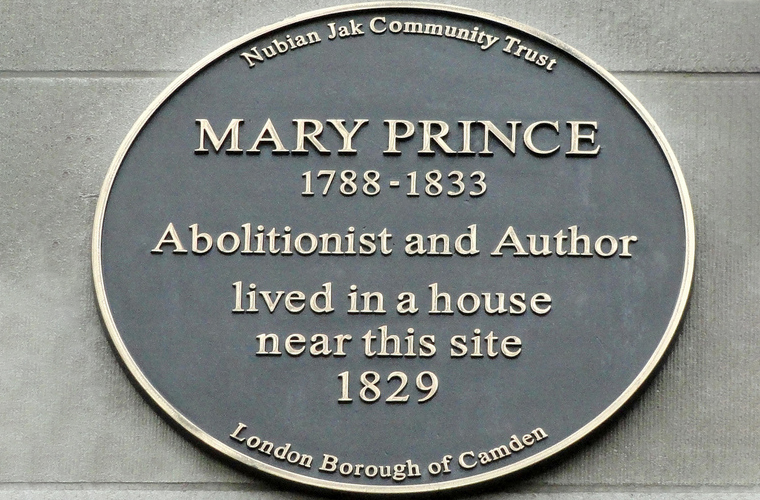 Mary Prince was born in 1788, to an enslaved family in Bermuda. She was sold to a number of brutal owners and suffered from terrible treatment. Prince ended up in Antigua belonging to the Wood family. in December 1826, she married Daniel James, a former slave who had bought his freedom and worked as a carpenter and cooper.

For this act, she was severely beaten by her master. In 1828, she traveled to England with her owners. She eventually ran away and found freedom, but only in England and she could not return to her husband. Mary campaigned against slavery, working alongside the Anti Slavery Society and taking employment with Thomas Pringle, an abolitionist writer and Secretary to the Anti-Slavery Society.

She became the first woman to present an anti-slavery petition to Parliament and the first black woman to write and publish an autobiography, ‘The History of Mary Prince: A West Indian Slave ‘.  The book was a key part of the anti-slavery campaign. It made people in Britain aware that, although the Slave Trade had been made illegal, the horrors of life on the plantations continued for so many people. Extracts from Mary Prince’s account are provided below.

EXTRACT 1
We followed my mother to the market-place. At length, the vendue master, who was to offer us for sales like sheep or cattle, arrived and asked my mother which was the eldest. She said nothing but pointed to me. He took me by the hand, and led me out into the middle of the street, and, turning me slowly round, exposed me to the view of those who attended the venue. I was soon surrounded by strange men, who examined and handled me in the same manner that a butcher would a calf or a lamb he was about to purchase. The bidding started at a few pounds, and gradually rose to 57. The people who stood by said that I had fetched a great sum for so young a slave. I then saw my sisters led forth and sold to different owners. When the sale was over, my mother hugged and kissed us, and mourned over us, begging us to keep a good heart. It was a sad parting; one went one way, one another …

The next morning my mistress set about instructing me in my tasks. She taught me to do all sorts of household work. And she taught me (how can I ever forget it!) the exact difference between the rope and the whip when applied to my naked body by her own cruel hand. And there was scarcely any punishment more dreadful than the blows received on my face and head from her hard heavy fists. She was a fearful woman and a savage mistress to her slaves.

EXTRACT 2
Mary Prince had a number of different owners. One was the owner of salt ponds.

I was immediately sent to work in the salt water with the rest of the slaves. I was given a half barrel and a shovel and had to stand up to my knees in the water, from four o’clock in the morning till nine, when we were given some Indian corn boiled in water.

We were then called again to our tasks, and worked through the heat of the day; the sun flaming upon our heads like fire and raising salt blisters in those parts which were not completely covered. Our feet and legs, from standing in the salt water for so many hours, soon became full of dreadful boils, which eat down in some cases to the bone.

We came home at twelve; ate our corn soup as fast as we could, and went back to our employment till dark at night. We slept in a long shed, divided into narrow slips. Boards fixed upon stakes driven into the ground, without mat or covering, were our only beds.”