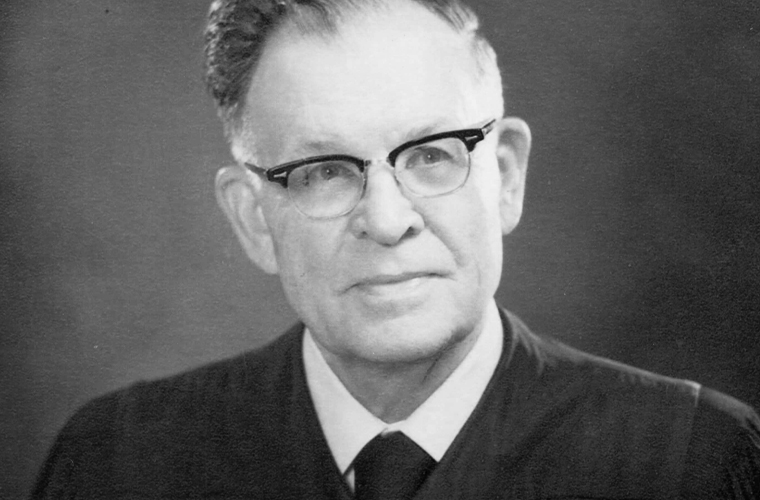 William Bootle, a U.S. District Court judge from 1954 to 1981, presided over several federal court challenges to racial segregation in Georgia, most notably the lawsuit that forced the integration of the University of Georgia (UGA) in 1961. He also issued a number of court orders that were instrumental in desegregating Georgia’s schools, elections, and transportation facilities.

William Augustus Bootle, the son of Philip L. Bootle and Laura Lilla Benton, was born on August 19, 1902, in Round O, South Carolina. His family lived in and around Walterboro, South Carolina, until 1917, when they moved to Berrien County, Georgia. In 1918 Bootle graduated from Reidsville High School in Tattnall County before enrolling at Mercer University in Macon, where he earned a Bachelor of Arts degree in 1924 and a Bachelor of Law degree a year later. After graduating from law school he entered private law practice with the firm Jones, Park, and Johnson in Macon, which remained his home. In 1928 Bootle married Virginia Childs, with whom he had three children.

When Franklin D. Roosevelt became president of the United States in 1933, Bootle left the federal prosecutor’s post and returned to private practice. Shortly after he and fellow Macon attorney J. Douglas Carlisle formed the law firm Carlisle and Bootle, he was named dean of the Mercer University School of Law, where he had taught classes since 1926. Hired as an interim dean, Bootle held the position, along with teaching responsibilities, until 1937. In 1999 the law school honored Bootle, a five-term Mercer University board member and one of the university’s three “lifetime” trustees, by establishing in his name an endowed chair for the study of professionalism and ethics in law.

Following the death of U.S. District Court judge Abraham Conger in late 1953, U.S. president Dwight Eisenhower appointed Bootle to fill the vacant judgeship in the seventy-one-county Middle District, comprising the areas surrounding Albany, Athens, Columbus, Macon, Thomasville, and Valdosta. Bootle took the oath of office on June 2, 1954, two weeks after the U.S. Supreme Court declared in Brown v. Board of Education that racially segregated schools were unconstitutional. During Bootle’s career, his courtroom was the site of a number of important lawsuits based on the Brown precedent, and he also presided in a number of U.S. Justice Department court actions brought to force Georgia officials to comply with the Civil Rights Act of 1964.

In November 1954 Bootle ruled in favor of twenty-two Black Randolph County citizens who sued county voting officials for excluding them from voter registration lists, thereby becoming one of the first federal judges in Georgia to hold that the Brown decision authorized a “class action.” This ruling enabled African American plaintiffs to seek legal relief on behalf of an entire class of people affected by a discriminatory system. In a pair of 1962 class action suits, Bootle ordered the desegregation of Bibb County and Dougherty County elections, and of the Bibb County bus system. In the summer of 1965, in a case brought by four Sumter County women arrested for trying to join a whites-only voting line, Bootle declared Sumter County’s racially segregated elections illegal.

School Desegregation
Bootle’s school desegregation rulings favored the moderate “freedom of choice” doctrine. But as was the case with many southern federal judges of the era, Bootle’s rulings following judicial precedent and ordering local officials to implement higher U.S. court rulings drew protests aimed at the judge. In one of his earliest school cases, Bootle told the Americus school board in 1960 that it could not lawfully exclude children of the local Koinonia Farm, a multiracial religious community, from its countywide school zone. White Sumter County parents reacted by hanging the judge in effigy outside the federal courthouse in Americus.

Segregationist demonstrations against Bootle’s rulings fueled a state government crisis during the UGA desegregation case. On January 6, 1961, the day that Bootle ruled that UGA had unlawfully rejected Black applicants, Hamilton Holmes and Charlayne Hunter, white students demonstrated on the Athens campus and attempted to burn a cross. Five days later, after Bootle and a federal appeals court had nullified Governor Ernest Vandiver’s move to close the university and block the Black students’ admission, students rioted outside Hunter’s dormitory. The university’s administration suspended Holmes and Hunter “for their own safety,” and Bootle responded to the Black students’ plea for injunctive relief by ordering that their suspensions be rescinded. Holmes and Hunter’s constitutional rights were “not to be sacrificed or yielded to violence and disorder,” Bootle wrote. “Nor can the lawful orders of this court be frustrated by violence and disorder.”

In Macon Bootle received harsh public criticism even though he routinely ruled in favor of local officials’ “freedom of choice” integration plans. In 1963 forty-four Black students sued for admission to white schools in Bibb County, and Bootle’s ruling in their favor supported a school board compromise calling for gradual integration, driven by voluntary transfers, over a nine-year period.

In 1969, though, the U.S. Supreme Court ordered segregated school systems to “immediately” integrate completely, which spurred 1,500 white parents and students from Macon to stage a protest march on the judge’s home. Ironically, Bootle was in the process of upholding the county’s existing “freedom of choice” plan by writing a ruling that combined and desegregated high schools but left elementary schools subject to “neighborhood school” zones. The U.S. Court of Appeals for the Fifth Circuit overturned Bootle’s order, however, and a 1971 U.S. Supreme Court decision further required him to order that school officials consider busing to achieve integration. Ultimately, Wilbur Owens, Bootle’s successor, oversaw the integration of Bibb County elementary schools, as Bootle assumed senior judge status in March 1972.

Preston King Case
Bootle retired fully from the federal bench in 1981, and in 1998 the federal courthouse in Macon has renamed the William Augustus Bootle Federal Building and the United States Courthouse.

In 1999 Bootle, then in his nineties, once again received media attention when he joined in petitioning U.S. president Bill Clinton to pardon Preston King, whom Bootle had sentenced to prison in 1961 for draft evasion. King, an Albany native and the brother of civil rights attorney C. B. King, had refused to serve in the military in 1958 because he believed that his draft board had denied him a college deferment because of his race. He noted that the board addressed him as “Mr. Preston King” before learning that he was Black and referred to him as “Preston” thereafter. Upon King’s conviction, Bootle sentenced him to eighteen months in prison, but rather than surrender to U.S. marshals, King moved to England, where he lived in exile and became a professor of political science.

For years family and supporters lobbied for a presidential pardon, which Clinton granted soon after Bootle agreed to support King’s petition. Upon his first trip back to the United States, King visited Macon to thank the judge personally and characterized Bootle as a jurist of “moral courage” and “respectful of customary precedent and sovereign legal authority.”