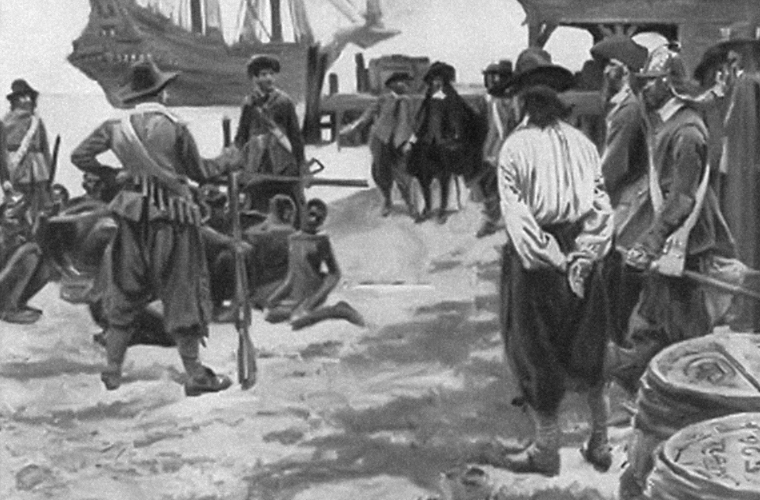 The men and women exposed to the brutalities of the Middle Passage came from up and down the west coast of Africa—from Senegambia in the north and west to the so-called Slave Coast of present-day Benin and western Nigeria to West-Central Africa. In all these regions, they came increasingly from farther inland as the trade grew and transformed the people of the continent from farmers to raiders, traders, and refugees. They tended to be prisoners of war, petty criminals, or common people kidnapped by African traders. (European powers often encouraged or waged war for no other reason than to produce prisoners.) Their religions varied—many Africans, especially in Angola, were exposed to Christianity through Portuguese missionaries. Their languages also varied, but, especially among Africans of the same region, were often mutually intelligible. Although captains worried about chaining men of shared backgrounds together, lest they know how to speak to one another and plot insurrection, they also feared chaining together men who could not speak to one another, lest their inability to communicate in their shared distress lead to quarrels and injuries.

The two-person leg irons chafed, causing pain and making any movement difficult, especially when one party needed to use the “necessary bucket.” Some captains used both wrist manacles and leg shackles, others just one or the other. Some captains even declined to restrain certain ethnic groups that had proven over time unlikely to rise in revolt. After sixteen hours in the hold, all Africans were herded onto the main deck for about eight hours each day, weather permitting. There they were fed twice and forced, as a form of exercise, to “dance” and sometimes sing, although almost any movement was painful for those in manacles and shackles.

Africans on the slave ships lived in terror. Many of them had been separated from their friends, families, and communities when first captured, and then separated again aboard ship. They were the victims of often-terrible punishments and sexual exploitation, and many believed that the white men planned to kill and eat them. (Their misapprehension of European cannibalism was actually encouraged by some African elites who manipulated their people with the fear of enslavement.) Africans did resist, however. Some committed suicide by jumping overboard, while others refused to eat. The latter were fed with the help of the speculum oris, a scissors-shaped instrument that, with the help of a thumbscrew, forced the jaws open. Officers often treated hunger strikers with special ruthlessness because such acts of resistance were prone to spread.

Slaves revolted nonetheless. They planned their actions carefully, using a variety of means to communicate even while discovering just as many obstacles to effective coordination. The risk of discovery was so great that groups of conspirators were often kept small, with the hope that others would join spontaneously when the time came. Physical separation hindered communication between males and females, and tensions between ethnic groups, sometimes caused by nothing more than language barriers, also caused problems. And suspicions flared under the ship’s enormous pressures. In carrying out an insurrection, many African men benefited from previous experience in the military and, in some cases, with European firearms. Occasionally slaves were able to survive the weaponry arrayed against them and take control of the ship, as they did aboard the Clare in 1729. In other instances, an insurrection resulted in the deaths of nearly everyone aboard—captive and crew—such as what happened on the “ghost ship” discovered in the Atlantic in 1785. Although several hundred uprisings are known from the records of slave ships, insurrections usually failed and resulted in a large loss of African life and gruesome punishments.

The Africans who survived to arrive in Virginia were cleaned, greased with palm oil to improve their appearance, and prepared for sale, which took place either aboard ship (in what was called a “scramble”) or at a market on shore. Here those who had bonded over the length of the Middle Passage—through terror, sickness, and resistance—were separated again. Having been known to their custodians on the ship just as numbers, they now were given English names. And, as the historian Marcus Rediker has argued, if they boarded the ship as Igbo, Fante, or Ndongo, they left it enslaved and black.