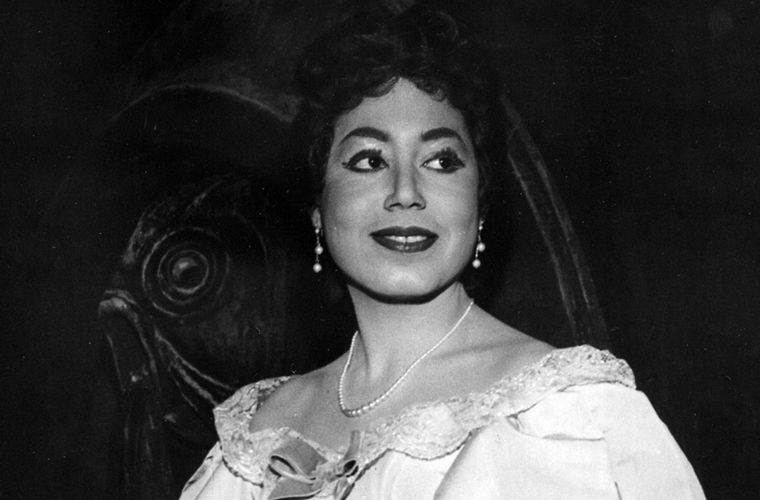 Mattiwilda Dobbs’s exceptional vocal gifts and musical skills enabled her to cross color barriers to become an internationally known opera star. The Atlanta native was the first African American to sing at La Scala in Milan, Italy, and the first Black woman to be offered a long-term contract by the Metropolitan Opera Company in New York.

Named for her maternal grandmother, Mattie Wilda Sykes, Mattiwilda Dobbs was born on July 11, 1925. She was the fifth of six daughters born to Irene Ophelia Thompson and John Wesley Dobbs, who were leaders in the African American community of Atlanta’s Auburn Avenue area. Like her sisters, she began piano lessons at the age of seven, sang in community and church choirs, and attended Spelman College, where she began to study voice. Naturally shy, she was so nervous at the first solo appearances that she had to lean on the piano for support, but her unusual talent and quality of voice persuaded her father to fund further studies in New York. She studied with Lotte Leonard and won a Marian Anderson Award, among other scholarships, and a John Hay Whitney Fellowship, which enabled her to study in Europe.

Dobbs’s coloratura soprano was praised for its freshness and agility, as well as for the beauty of its tone. After winning the International Music Competition in Geneva, in Switzerland, in 1951, she sang in major festivals and opera houses throughout Europe, including La Scala in 1953. Her American debut was in 1954 at a recital in New York. She sang the role of Gilda in Giuseppe Verdi’s Rigoletto for her debut with the Metropolitan Opera in 1956. Although Marian Anderson, a Black opera singer from Pennsylvania, had preceded her to that stage in 1955, Dobbs was the first African American woman to be offered a long-term contract by the Met; she sang twenty-nine performances, in six roles, over eight seasons.

Although she remained close to her family and performed in Atlanta several times, personal as well as professional considerations prevented Dobbs from making the city her home. She lived in Spain with her first husband, Luis Rodriguez, who died of a liver ailment in June 1954, fourteen months after their wedding. She then married Bengt Janzon, a Swedish newspaperman, just before Christmas 1957. Her family attended the wedding, but because of the stir an interracial marriage would have caused in the segregated South, the ceremony was held in New York, and the new couple made their home in Sweden. Bengt Janzon did not visit Atlanta until 1967. (He died in 1997).

Following the example set by African American performer and activist Paul Robeson, Dobbs refused to perform for segregated audiences. In Atlanta, she could have performed in African American churches or colleges, but she was not able to perform for a large integrated audience until the Atlanta Municipal Auditorium was desegregated in 1962, when she was joined onstage and given a key to the city by Mayor Ivan Allen Jr. It was the first of many performances in her home city. Before the organization of the Atlanta Opera in 1985, Dobbs performed in operas produced and directed by the acclaimed opera singer Blanche Thebom, and in 1974 she sang at the gala marking the inauguration of her nephew Maynard Jackson as mayor of Atlanta.

In 1974, after retiring from the stage, Dobbs began a teaching career at the University of Texas, where she was the first African American artist on the faculty. She spent the 1974-75 school year as artist-in-residence at Spelman College, giving recitals and teaching master classes. In 1979 Spelman awarded honorary doctorates to both Dobbs and Marian Anderson.

Dobbs continued her teaching career as a professor of voice at Howard University, in Washington, D.C. She served on the board of the Metropolitan Opera and on the National Endowment of the Arts Solo Recital Panel. Dobbs continued to give recitals until as late as 1990. She died on December 8, 2015, at her home in Atlanta.