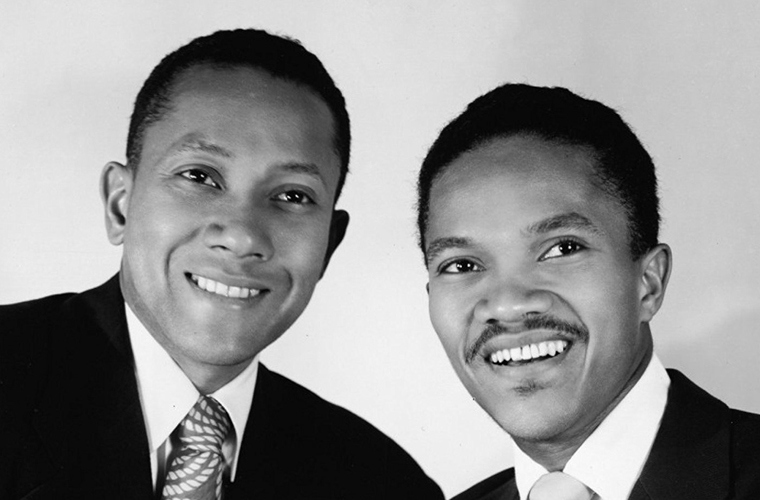 Nicholas Brothers, a tap-dancing duo whose suppleness, strength, and fearlessness made them one of the greatest tap dance acts of all time. Fayard Antonio Nicholas (b. October 20, 1914, Mobile, Alabama, U.S.—d. January 24, 2006, Los Angeles, California) and his brother Harold Lloyd Nicholas (b. March 17, 1921, Winston-Salem, North Carolina, U.S.—d. July 3, 2000, New York, New York) developed a type of dance that has been dubbed “classical tap,” combining jazz dance, ballet, and dazzling acrobatics with tap dancing. Growing up in an era of “hoofers” and “board beaters,” the Nicholas Brothers elevated tap dancing with their singular elegance and sensational showmanship.

Early life
The brothers’ parents were both college-educated professional musicians. Their mother, Viola, was a classically trained pianist, and their father, Ulysses, was a drummer. They performed together in pit orchestras for Black vaudeville shows throughout the 1910s to the early 1930s, forming their own group called the Nicholas Collegians in the 1920s.

From the time Fayard was an infant, his parents brought him to the theatre for their practices and performances. There he gained an early education in show business by watching great Black entertainers such as the jazz musician Louis Armstrong, the dance team Buck and Bubbles, the singer Adelaide Hall, and the dance teams Leonard Reed and Willie Bryant and the Berry Brothers. The Nicholas family traveled from city to city to play with various orchestras, but, after the birth of two more children, Dorothy and Harold, they settled in Philadelphia in 1926 and continued working with the Nicholas Collegians. Their orchestra played at the Standard Theatre, one of the city’s largest and most prestigious Black vaudeville houses.

The 1930s: Broadway, films, and nightclub appearances
From 1930 to 1932 the Nicholas Brothers played in and around Philadelphia with great success. Their first big break came in 1932 when they were hired to play at Harlem’s famous Cotton Club alongside Black show business legends such as the jazz pianist, bandleader, and composer Duke Ellington, the singer Ethel Waters, the bandleader and singer Cab Calloway, and the tap dancer Bill Robinson. The youngsters were an instant sensation. Impeccably attired, Harold and Fayard, now 11 and 18 years old (though billed as much younger), dazzled every audience that walked through the doors of the notorious gangster-run nightclub. They performed intermittently at the Cotton Club, in both its uptown and downtown locations, from 1932 until it closed in 1939.

The Nicholas Brothers were part of a small cadre of Black dancers who appeared frequently in Hollywood films of the 1930s and ’40s. Their appearance in the short film Pie, Pie Blackbird (1932) led to a string of features in Hollywood motion pictures, including Kid Millions (1934), An All-Colored Vaudeville Show (1935), and The Big Broadcast of 1936 (1935). Fayard and Harold spent their careers shifting between engagements in vaudeville, movies, nightclubs, concerts, Broadway, records, radio, television, and extensive worldwide tours. Because of their versatility—they could sing, act, and dance and thus were considered a “triple treat”—they headlined all over the world. Fayard Nicholas later said, “We did everything in show business except opera.” They made their Broadway debut in The Ziegfeld Follies of 1936 alongside stars such as the singer Fanny Brice, the comedian Bob Hope, the actress Eve Arden, and the dancer Josephine Baker. In 1937 the brothers so impressed the choreographer George Balanchine with their dancing that they were cast in his production of Rodgers and Hart’s musical Babes in Arms. That same year they made their first trip to Europe with the all-Black cast of Lew Leslie’s Blackbirds.

The 1940s: Stormy Weather and St. Louis Woman
During the 1940s the Nicholas Brothers continued to appear in films, including Down Argentine Way (1940), Tin Pan Alley (1940), and Sun Valley Serenade (1941). Because of the racial prejudice characteristic of the era, Black performers never held major roles in mainstream feature films, and—unlike such tap dancers as Fred Astaire and Gene Kelly—the Nicholas Brothers did not have the opportunity to try out their acting skills. Instead of leading men, they were presented as a specialty act. Unlike other Black performers, however, they rarely donned service uniforms; they usually appeared in formal ties and tails or well-cut suits. Despite these racial restrictions, the brothers’ brief but noteworthy film appearances brought them worldwide celebrity and gave them star billing wherever they traveled. In only one film—The Pirate (1948), starring Gene Kelly and Judy Garland—did they have roles apart from dancing?

The crowning achievement of their work was preserved in the film Stormy Weather (1943), which had an all-Black cast. In it the brothers, suited magnificently in white tie and tails, dance on, over, and around the Cab Calloway Orchestra bandstands, dance side-by-side up a flight of stairs, leap onto a piano where they trade syncopated notes with the pianist, jump out onto the floor in full splits, dance up a divided stairway built of gigantic white stairs, meet at the top to exchange a few thrilling moves, and then leap into splits and slide down separate ramps, meeting once again on the dance floor to finish this dazzling routine with a crisp bow.

In the early 1940s, they performed with Cab Calloway in the musical variety show The Cotton Club Revue. They had starring roles on Broadway in the musical St. Louis Woman (1946), with music by Harold Arlen, lyrics by Johnny Mercer, and book by Arna Bontemps and Countee Cullen; also featured were Pearl Bailey, Rex Ingram, and Ruby Hill. In 1948 they headlined the indoor circus extravaganza, Cirque Medrano, in Paris. The following year they appeared in a Royal Command Performance at the London Palladium for the king and queen of England.

Television and later work
With the advent of television, the brothers were much in demand; they appeared on programs such as All-Star Revue in 1951, The Colgate Comedy Hour in 1952, The Hollywood Palace in 1964, and The Bell Telephone Hour in 1966. Beginning in 1965, the Nicholas Brothers worked frequently in Las Vegas, and they toured—often with Sammy Davis, Jr.—throughout the United States and Europe. Fayard appeared twice more on film, in The Liberation of L.B. Jones (1970) and Night at the Golden Eagle (2002). Harold appeared in several more films, including Uptown Saturday Night (1974) and Tap (1989).

Throughout the 1980s and ’90s the Nicholas Brothers traveled the world to receive awards and honors; among these were the Kennedy Center Honors (1991) for lifetime achievement. Together or individually, they appeared in a string of stage shows up until 1993. Together with Cholly Atkins, Henry LeTang, and Frankie Manning, Fayard won a Tony Award in 1989 for his choreography in the musical Black and Blue (performed 1989–91). In 1994 both brothers were honored with a star on the Hollywood Walk of Fame.

The Nicholas Brothers had begun their careers at a time when opportunities were few and stereotyped roles the norm for Black actors and entertainers. To their credit, however, the Nicholas Brothers rose above this marginalization and, with a sense of dignity and a style all their own, earned the respect of generations of tap dancers and audiences the world over.