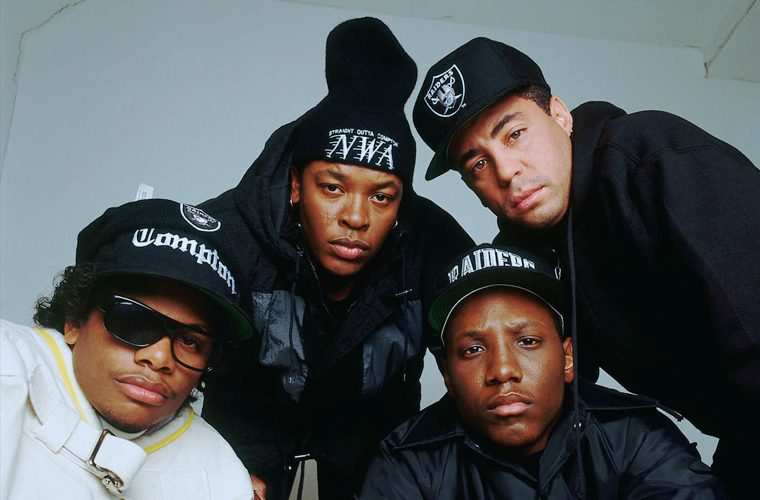 N.W.A was formed in 1987 by Eazy-E, a high-school dropout and drug dealer living in Compton. Using drug money, Eazy-E began a record label, Ruthless Records, alongside longtime industry man Jerry Heller. Eazy-E then recruited Dr. Dre—who was a member of the group World Class Wreckin’ Cru—and Ice Cube—a member of the rap group C.I.A. (Cru’ in Action!)—to write for the label. At Dr. Dre’s suggestion, Eazy-E agreed to sign the New York group H.B.O. to Ruthless, but when the group turned down Ice Cube and Dr. Dre’s song “The Boyz-n-the-Hood,” Eazy-E, with some coaching from his new partners, recorded the song himself. The result—Eazy-E’s first single—was a hit.

The group’s first single, “Panic Zone,” features the three founders of N.W.A new member Arabian Prince was released on August 13, 1987. It was also featured on the collaborative album N.W.A. and the Posse, released November 6, 1987. Eazy-E’s “Boyz-in-the-Hood” (restyled since its initial release) made the album as well, alongside “8 Ball” and “Dope Man,” which were both remixed later on Straight Outta Compton.

After the release of N.W.A. and the Posse, Ice Cube left the group for a year to study drafting at the Phoenix Institute of Technology. When he returned in 1988, the group recorded and completed Eazy-E’s solo album, Eazy-Duz-It (Dr. Dre and DJ Yella did most of the producing, while MC Ren and Ice Cube wrote most of the lyrics), as well as their magnum opus, Straight Outta Compton, which included the group’s sixth and seventh members, Arabian Prince and The D.O.C.

Released under Priority Records and Ruthless Records on August 8, 1988, Straight Outta Compton details the lives of its creators via a blend of drum-heavy production, samples, turntable scratches, and aggressive, often profane lyrics. This “reality rap,” as Ice Cube once called it, offers uncensored thoughts on women, drug dealing, gang activity, and police brutality—topics that had not yet been explored so candidly for such a wide audience in any genre of music. Such candor had a price, however; songs like “Fuck the Police” (originally titled “_ _ _ _ the Police (Fill in the Blanks)”) and “Gangsta Gangsta” were criticized for depicting violence and other unlawful behavior, especially, in the former, toward police. “Gangsta Gangsta” also features homophobic slurs, and “I Ain’t Tha 1”—and, indeed, most N.W.Songs—pushes unsubtle sexist narratives. The artists who formed the group, especially Ice Cube, Dr. Dre, and Eazy-E, continued to make controversial music later in their solo careers.

However, nothing compared with the controversy that surrounded “Fuck the Police.” The song parodies a criminal trial, wherein Ice Cube, MC Ren, and Eazy-E testify against the police department to a judge (Dr. Dre). The lyrics—and, indeed, the prosecutors—strongly criticized the police department for stereotyping, falsely arresting, and even brutalizing minorities. In their verses, Ice Cube, MC Ren, and Eazy-E also make threats toward police officers; these lyrics were the subject of the most controversy, though their alarming content was effective in creating a conversation about racism and militarization in the police force. The song became increasingly relevant a few years later in the wake of the Rodney King beating, and it continued to be used as a protest song well into the 21st century.

Shortly after the album’s release, the FBI sent a warning letter to Priority Records and N.W.A regarding “Fuck the Police,” which the bureau considered inflammatory. Though few radio stations aired the song, it gained a good deal of attention; in fact, it is likely that the FBI letter boosted album sales, which hit 750,000 before the group went on tour in 1989. The album, which also includes the hit “Express Yourself,” eventually reached triple platinum status and is widely considered one of the most influential hip-hop albums of all time.

In December 1989, just over a year after the release of Straight Outta Compton, Ice Cube left the group over a royalty dispute. After writing many of the album’s lyrics and performing on several of its songs, Ice Cube felt that he was not paid appropriately for his contributions. His relationship with Heller, the group’s manager, quickly worsened over the dispute, and Ice Cube left to pursue a solo career, where he would, on several occasions, insult Heller and the remaining members of N.W.A.  in his lyrics. The dispute was settled out of court in 1990.

N.W.A, now with five members (Eazy-E, Dr. Dre, DJ Yella, MC Ren, and The D.O.C.), released their extended-play record (EP) 100 Miles and Runnin’ on August 14, 1990. The EP features a number of references to Ice Cube, including the tag “Benedict Arnold” on the song “Real Niggaz,” which occurs again on the group’s second and final studio album, Efil4zaggin (also known as Niggaz4Life). Released on May 28, 1991, under Ruthless Records and Priority Records, the album did not approach the success of Straight Outta Compton. It did, however, hit number one on the Billboard 200 chart in its second week, and its production, done mostly by Dr. Dre, is considered a watershed development in the history of the hip-hop sound. It also furthered the rivalry between Ice Cube and the remaining members of N.W.A; months later, Ice Cube released his second solo album, Death Certificate, which included the memorable N.W.A diss track “No Vaseline.”

Dr. Dre had become dissatisfied with his deal at Ruthless Records by the time of Efil4zaggin’s release. In early 1992, he and The D.O.C. left N.W.A and Ruthless Records for Death Row Records, effectively ending N.W.A. The remaining members (Eazy-E, MC Ren, and DJ Yella) pursued solo careers, sometimes rejoining to collaborate on new music. (Assisted by DJ Yella, Eazy-E saw the greatest success of the three.) Meanwhile, Dr. Dre and Ice Cube were having luck in their solo careers, and soon Dr. Dre and Eazy-E began their own rivalry that would continue until Eazy-E’s AIDS-related death on March 26, 1995.

Dr. Dre and Ice Cube continued making music well into the 21st century, establishing their own legacies as seminal figures in hip-hop, but N.W.A retains a legacy as a vehicle for urban commentary and as a transfigurative force in hip-hop history. In 2015 a biopic about the group, Straight Outta Compton, was released in theaters to warm commercial and critical reception. The following year, N.W.A was inducted into the Rock and Roll Hall of Fame.