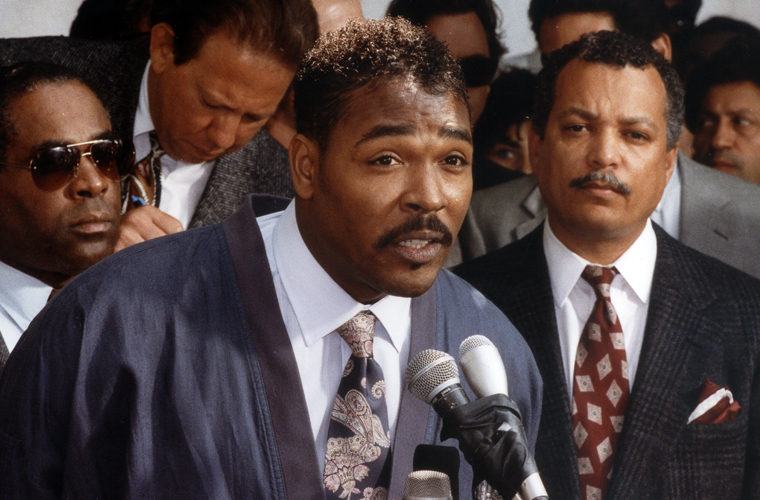 Rodney Glen King, American personality (born April 2, 1965, Sacramento, Calif.—died June 17, 2012, Rialto, Calif.), was an African American construction worker whose videotaped beating by white Los Angeles Police Department (LAPD) officers in March 1991 (and the officers’ subsequent treatment by the courts) sparked violent race riots and fueled a charged debate about civil rights and the U.S. justice system. King’s car was pulled over for speeding by four LAPD officers, and he attempted to escape on foot. After being chased down, he was repeatedly kicked, struck with batons, and stunned with Tasers, and he sustained serious injuries, including skull fractures and facial paralysis. The beating, which was surreptitiously recorded by a bystander and then widely broadcast on television, heightened racial tensions nationwide and rendered King a symbol of a perceived pattern of police brutality toward racial minorities.

Under public pressure, the officers were brought to trial in 1992, but the jury acquitted three, and a mistrial was declared for the fourth. The verdict spurred some of the worst riots in U.S. history, resulting in more than 50 dead, thousands injured, and an estimated $1 billion in damages in the area of South Los Angeles. King pleaded for peace during the riots, famously asking, “Can we all get along?” The beating and the subsequent riots prompted a widespread investigation of police conduct and the resignation of the LAPD chief. The officers later were indicted on federal civil rights charges, and two were convicted; King sued the city and was awarded $3.8 million in damages. He spent most of the remainder of his life struggling with substance-abuse problems and was arrested numerous times, including at least once for domestic assault. His memoir, The Riot Within My Journey from Rebellion to Redemption (2012, with Lawrence J. Spagnola), was published just weeks before King was found dead in his swimming pool.