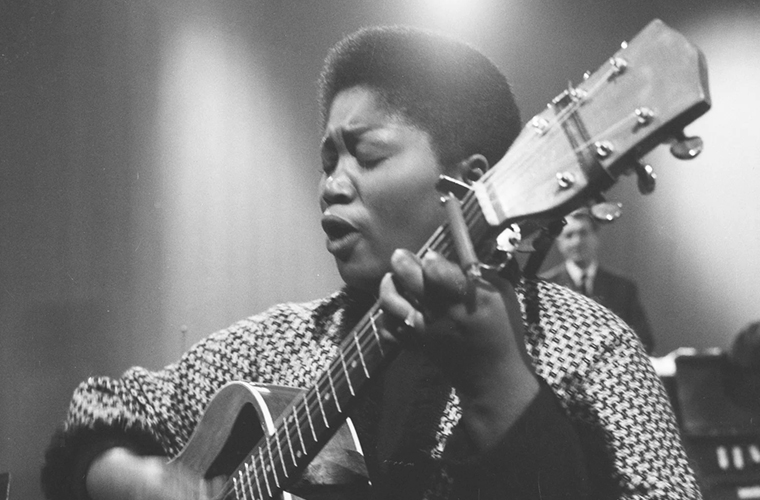 Anointed as the queen of American folk music by Dr. Martin Luther King, Jr., Odetta Gordon, a coloratura soprano, was born Odetta Holmes on December 31, 1930, in Birmingham, Alabama. When she lost her father, Rueben Holmes, at a young age, her mother, Flora, remarried and gave the children their stepfather’s name, Felious. Moving to Los Angeles with her family in 1936 at age six, Odetta began studying classical music. After graduating from high school, she attended Los Angeles City College where she study classical opera before being introduced to folk music.

In 1947, Odetta began her professional touring in the musical Finian’s Rainbow. Her first job as a folksinger came in San Francisco, where she quickly won over audiences. In 1953, when she came to New York, Harry Belafonte and Pete Seeger were instrumental in introducing her to larger audiences. In 1959, Belafonte included her in a major television special, which made her name nationally known. In 1954, Odetta recorded her first album for Fantasy Records. In 1963, she released Folk Songs, which became one of the year’s best-selling folk albums.

As an activist for social change, Odetta performed at the 1963 March on Washington and took part in the March on Selma. She performed for President Kennedy and his cabinet on the nationally televised civil rights special, Dinner with the President. Her career blossomed during the golden years of folk music when she began recording albums for Vanguard Records. Odetta has sung with symphony orchestras and in operas all over the world and has been a featured performer everywhere in the country, including the Newport Folk Festivals and in her solo concerts at Carnegie Hall.

Odetta has also acted in films such as The Autobiography of Miss Jane Pittman and has starred in countless television specials, such as BBC-TV’s Concert Special, and Talking Bob Dylan Blues. She has also hosted the Montreux Jazz Festival. Having been inspired by the great contralto Marian Anderson and having herself inspired such revered artists as Bob Dylan, Joan Baez, and Janis Joplin, it is no wonder that among her countless other achievements, her album, Blues Everywhere I Go (2000), was nominated for a Grammy. In 1999, Odetta was awarded the National Medal of Arts & Humanities by President Bill Clinton and the first lady. On Saturday, March 24, 2007, Odetta was honored by the World Folk Music Association with a lifetime tribute concert called, ODETTA – A Celebration of Life & Music at the Northern Virginia Community College in Alexandria, Virginia.