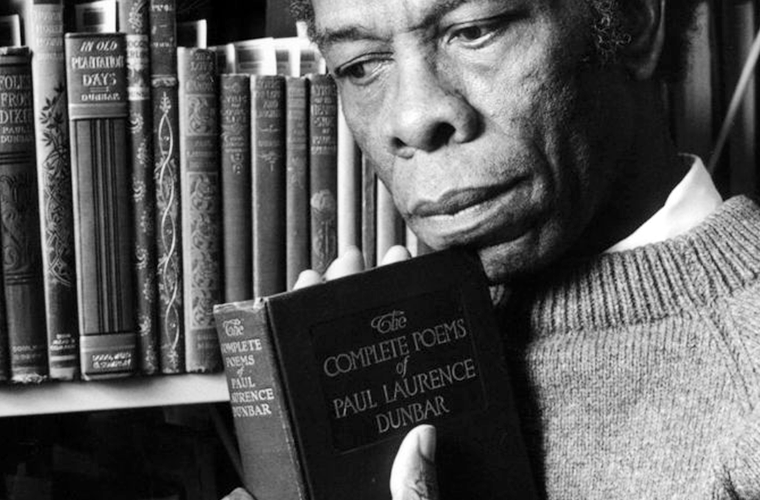 Paul Laurence Dunbar was born on June 27, 1872, in Dayton, Ohio, the son of two former slaves. Both of his parents enjoyed reading. His mother taught Dunbar to read when he was four years old. In 1886 Dunbar entered Central High School in Dayton as the only African American student in his class, and he made many Caucasian (white) friends. He received a formal education in high school, graduating in 1891. He excelled as a student, serving as editor of the school newspaper and as a class poet.

In 1890 he attempted to start a newspaper for African American readers. Unable to go to college after graduating from high school and experiencing racial discrimination (or unfair treatment based solely on race), Dunbar began looking for work in a law office, but eventually took a job as an elevator operator. He never gave up his desire to become a writer, however, and he was able to publish some of his poems in newspapers.

His first books
Dunbar published his first book of poems, Oak and Ivy, in 1893 with his own money, and his second book, Majors and Minors, two years later. William Dean Howells, then one of America’s most distinguished literary critics (a person who writes about and judges the writings of other people), read the second book and urged the young poet to concentrate on black dialect verse, or poems written using an African American style of English.

With the 1896 publication of Lyrics of Lowly Life, for which Howells wrote a very positive review, Dunbar’s professional career got a fabulous start. His works began to sell well enough for him to earn his living as a writer. He took Howells’s advice to study the “moods and traits of his own race in its own accents of our English,” so that his art was best shown in those “pieces which … described the range between [desire] and emotion … which is the range of the race.”

Dunbar wanted to satisfy the popular taste for the light, the romantic, the comic, and the sentimental. His short stories, which began appearing in popular magazines in the 1890s, often depicted African American folk characters, Southern scenes, and humorous situations. His first novel, The Uncalled (1898), like two of the three that followed— The Love of Landry (1900) and The Fanatics (1901)—is a sentimental tale about white people. His last long work of fiction, The Sport of the Gods (1902), is notable only for his failure to realize the possibilities in the story of a rural African American family becoming city people.

Last years
In 1898 Dunbar married Alice Moore, but they had an unhappy marriage. The couple separated in 1901, when Dunbar went to Washington, D.C., to consult for the Library of Congress. He was also unhappy with his writings. At this time he confided to a friend, “I see now very clearly that Mr. Howells has done me irreversible harm in the command he laid down regarding my dialect verse.”

Dunbar was suffering from tuberculosis (a lung disease) and tried all the “cures.” Alcohol brought temporary relief, but he became addicted. Nonetheless, he continued to produce short stories and poems. Sick and discouraged by the unimpressive reception of The Heart of Happy Hollow (1904), a collection of short stories, and Lyrics of Love and Sunshine (1905), which contains some of his best verses in pure English, he returned to Dayton, where he died on February 9, 1906. The Complete Poems of Paul Laurence Dunbar (1913; still in print) shows how well he succeeded in capturing many elements of African American life.