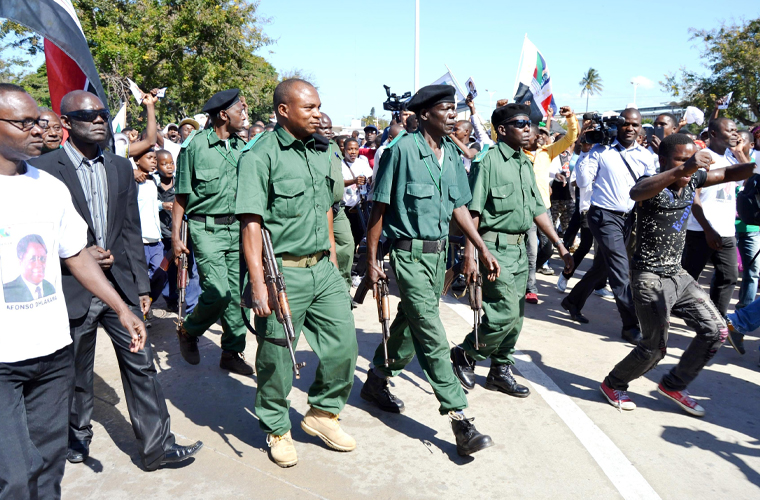 Renamo, byname of Mozambican National Resistance, Portuguese Resistência Nacional Moçambicana, a guerrilla organization that sought to overthrow the government of Mozambique beginning in the late 1970s and later functioned as a political party.

Renamo was formed in 1976 by white Rhodesian officers who were seeking a way to keep newly independent Mozambique from supporting the black guerrillas trying to overthrow the white Rhodesian government. These officers recruited disaffected guerrillas who had belonged to Mozambique’s successful independence movement, the Mozambique Liberation Front Frelimo). The sponsorship of Renamo was soon taken over by the South African armed forces. Renamo opposed the Marxist-leaning Mozambican central government, and Renamo’s guerrillas sought to disrupt the nation’s economy and infrastructure by cutting railway and power lines, destroying roads and bridges, and sabotaging oil-storage depots. In their raids on towns and villages, the guerrillas sometimes engaged in the wholesale massacre of civilians. By the late 1980s, Renamo’s insurgency had caused at least 100,000 deaths and the creation of more than 1,000,000 refugees. Mozambique’s economy was brought to a standstill, and the government was unable to keep the country’s railroad network functioning without the help of troops from Zimbabwe, Zambia, and Tanzania. A peace agreement was signed in 1992, and Renamo participated in multiparty elections after 1994. From 1999 until 2009, Renamo was part of a coalition of opposition parties, the Renamo–União Eleitoral (Electoral Union) electoral alliance, and remained active in Mozambique politics into the 21st century.

Tensions between Renamo and the Frelimo-led government grew—in part because of the growing economic imbalance in the country and the political marginalization of Renamo and other opposition groups—and in 2012 Renamo’s leader, Afonso Dhlakama, retreated to a Renamo jungle base, claiming that he feared for his life. Sporadic violence between Renamo fighters and government troops or police culminated in October 2013 with Dhlakama revoking the 1992 peace agreement. Renamo’s low-level insurgency continued until a new cease-fire and peace agreement was reached in 2014, which allowed Dhlakama to stand as the presidential candidate for Renamo in the country’s October presidential and legislative elections. He was defeated by Filipe Nyusi, the Frelimo candidate, but Renamo, as a party, increased its number of legislative seats. After the election, fighting between Renamo and the government flared in 2015 and continued into the next year. Both sides participated in peace talks beginning in mid-2016, leading to Renamo announcing a two-month unilateral truce in December. Renamo extended the truce repeatedly as the peace negotiations continued, and in August 2017 Dhlakama and Nyusi met in person for the first time since 2015.

Dhlakama died unexpectedly in May 2018; as leader of the opposition party in parliament, he was given a state funeral. Dhlakama’s untimely death initially left two critical questions unanswered: Who would succeed him as leader of Renamo? and How would his death affect the ongoing peace process? To the surprise of many, the group quickly named an interim leader, Ossufo Momade, in the days after Dhlakama’s death. Peace talks with the Frelimo-led government continued, and by year’s end, some progress had been made toward fulfilling Renamo’s demands of decentralizing governing power and integrating its members into either the country’s security forces or civil society and the government’s stipulation that the group disarms.