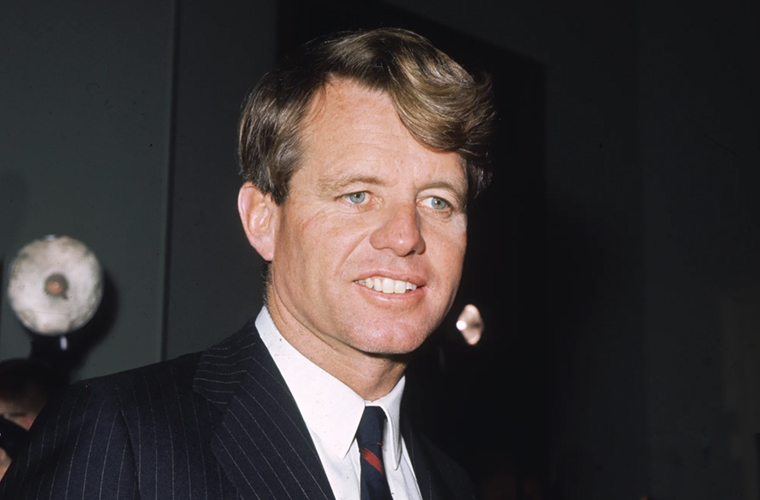 Robert Kennedy was attorney general during his brother John F. Kennedy’s administration. He later served as a U.S. Senator and was assassinated during his run for the presidency.

After managing his brother John’s presidential campaign, Robert Kennedy was appointed attorney general of the United States in 1960. As attorney general, he fought organized crime and was a key supporter of the Civil Rights Movement. After JFK’s assassination, Robert was elected to the U.S. Senate representing the state of New York. RFK was assassinated on June 5, 1968, during the California Democratic presidential primary. He died the next day.

Early Life & Siblings
Robert Francis Kennedy, nicknamed Bobby, was born in Brookline, Massachusetts, on November 20, 1925. His parents were Joseph, a rich businessman, and Rose, the daughter of the mayor of Boston. Raised as devout Roman Catholics, Robert and his seven siblings enjoyed a life of wealth and privilege. Among Kennedy’s older brothers was future U.S. President John F. Kennedy.

When Robert’s father, Joseph Sr., became a U.S. ambassador to Britain, the family moved to England. As they had been in America, the Kennedy family members were regarded as handsome, charismatic, and powerful, making them darlings of the press. The family returned to the States in 1939 as the threat of World War II was rapidly approaching.

Back in Massachusetts, Robert graduated from Milton Academy prep school and then enrolled in Harvard. After his older brother Joseph was killed during World War II, Robert left Harvard to join the Navy. In 1946, he went back to Harvard and graduated with a degree in government two years later. Robert spent the next three years pursuing a law degree at the University of Virginia Law School. During that time he met and married his sister’s roommate, a fellow student named Ethel Skakel. In 1951, the same year he graduated from law school, Robert passed the Massachusetts bar exam.

Political Career
Fresh out of law school, Kennedy joined the U.S. Department of Justice’s Criminal Division in 1951. In 1952 he resigned from the position to lead his older brother John’s senatorial campaign. In 1953 Kennedy became an advisor to the Senate Subcommittee on Investigations under Senator Joseph McCarthy. Kennedy left the position just six months later, objecting to McCarthy’s unjust investigative tactics.

Civil Rights
In 1954 Kennedy joined the Senate’s Permanent Subcommittee on Investigations as chief counsel for the Democratic minority. Kennedy aptly expressed his approach to helping minorities achieve equal rights in a speech to South African students: “Each time a man stands up for an ideal or acts to improve a lot of others, or strikes out against injustice, he sends forth a tiny ripple of hope, and crossing each other from a million different centers of energy and daring, those ripples build a current that can sweep down the mightiest walls of oppression and resistance.”

In 1957 Kennedy was appointed chief counsel to the Senate Select Committee on Improper Activities in the Labor of Management Field. Working under Senator McClellan, Kennedy uncovered the corruption of Teamsters union leader Jimmy Hoffa.

In 1960 Kennedy managed brother John’s presidential campaign. When JFK was elected, Robert was made U.S. attorney general and became one of JFK’s closest cabinet advisors. When JFK was assassinated in 1963, Robert resigned as attorney general the following September and announced his intent to run for a senate seat.

Kennedy ran successfully for senator of New York, and during his time in office, he continued to advocate for the poor and human rights and oppose racial discrimination and the escalation of involvement in the Vietnam War. He also set his sights on becoming a U.S. presidential candidate.

Assassination
1In 1968 Kennedy ran against Eugene McCarthy in the presidential election primaries. On June 5, 1968, following his victory speech at the California Democratic Primary at the Ambassador Hotel in Los Angeles, Kennedy was shot several times by gunman Sirhan Sirhan. He died the next day at age 42, his promising presidential administration over before it began.

Funeral
On June 6, Kennedy’s body was taken to St. Patrick’s Cathedral in NYC. The next morning a line of mourners extending 25 blocks long waited to pay their respects. By the afternoon hundreds of thousands more people bid farewell to Kennedy as they watched his coffin pass via funeral train en route to Washington, D.C. Kennedy was buried near his brother, John, at Arlington Cemetery.
Children