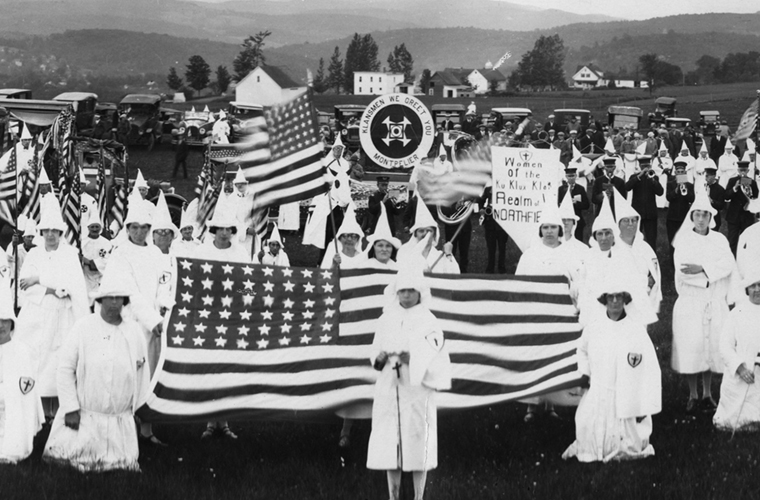 Founded in 1865 by a group of Confederate veterans, the KKK rapidly grew from a secret social fraternity to a paramilitary force bent on reversing the federal government’s progressive Reconstruction Era activities in the South, especially policies that elevated the rights of the local African American population. The name of the Ku Klux Klan was derived from the Greek word kyklos, meaning “circle,” and the Scottish-Gaelic word “clan,” which was probably chosen for the sake of alliteration. Under a platform of philosophized white racial superiority, the group employed violence as a means of pushing back Reconstruction and its enfranchisement of African-Americans. Former Confederate General Nathan Bedford Forrest was the KKK’s first grand wizard and in 1869 unsuccessfully tried to disband it after he grew critical of the Klan’s excessive violence.

Most prominent in counties where the races were relatively balanced, the KKK engaged in terrorist raids against African Americans and white Republicans at night, employing intimidation, destruction of property, assault, and murder to achieve its aims and influence upcoming elections. In a few Southern states, Republicans organized militia units to break up the Klan. In 1871, the passage of the Ku Klux Act led to nine South Carolina counties being placed under martial law and thousands of arrests. In 1882, the U.S. Supreme Court declared the Ku Klux Act unconstitutional, but by that time Reconstruction had ended, and much of the KKK had faded away.

The 20th century would see two revivals of the KKK: one in response to immigration in the 1910s and ’20s, and another in response to the African American civil rights movement of the 1950s and ’60s. Various chapters of the KKK still exist in the 21st century. According to the Southern Poverty Law Center, white supremacist violence is again on the rise in America. Several high-profile events, including the 2015 Charleston church shooting; the 2017 “Unite the Right” rally in Charlottesville, Virginia; the 2018 Pittsburgh synagogue shooting; and the 2019 shooting in an El Paso, Texas Walmart were all fueled by white supremacy and racism.