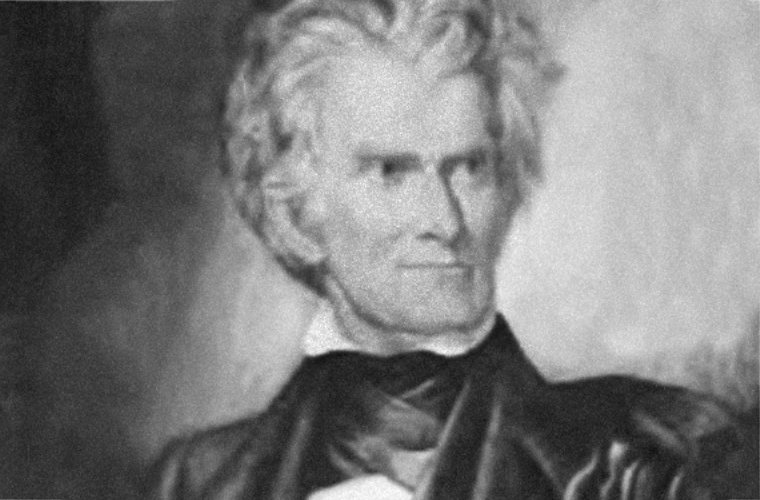 George Fitzhugh was born on November 9, 1806, in Prince William County and was the son of George Fitzhugh, a physician, and Lucy Stuart Fitzhugh. The family moved to a plantation in King George County about 1812. As a child, he attended a small school that met irregularly, but he read extensively, mastered Latin, and educated himself. Fitzhugh then studied law and qualified as an attorney on October 4, 1827. He married Mary Metcalf Brockenbrough on December 21, 1829, and they settled in her native Port Royal, in Caroline County, whereby 1842 he was in a law partnership with John T. Thornton. The Fitzhughs had six daughters and three sons. One daughter and one son died in November 1844, ages ten and two.

Fitzhugh published the most spirited defense of slavery of any antebellum Virginian. In doing so he exacerbated sectional tensions over the issue. Fitzhugh aimed his proslavery writings to provoke reactions from opponents, but he articulated resilient social mythology of slaveholder paternalism. His writings about slaveholders’ culture figured largely in twentieth-century historians’ examinations of American slavery.

Fitzhugh’s Tidewater Virginia society was changing rapidly. Enslavers sold surplus slaves at a high rate, more than 20 percent per decade, and a significant percentage of white Virginians left the region during the first half of the nineteenth century. At mid-century, Fitzhugh’s Caroline County had an African American majority, and a majority of the whole population was enslaved. The free black population was small but rising. According to census records, Fitzhugh owned five bonds people in 1830, eight in 1840, and twenty-seven in 1850.

Rather than investigate the changes that were unsettling his neighbors in eastern Virginia, Fitzhugh idealized the society of slaveholders. In 1850 he published Slavery Justified; by a Southerner, the first of several essays in which he defended slavery by attacking what he called a free society. Fitzhugh denied that the slave South was a modern commercial society dependent on foreign trade. Southern slavery, he argued, was a benign domestic institution and less inequitable than the free society of industrial Britain and Europe or the commercial American North. Continuing the argument in an addendum published four years later Fitzhugh wrote, “Experience has universally shown, that the slavery of the working classes to the rich, which grows out of liberty and equality, or free competition, is ten times more onerous and exacting than domestic slavery.” He also addressed his white Port Royal neighbors’ concerns that a growing free black population threatened white impoverishment. In a series of essays he wrote for the Fredericksburg Recorder and published as a pamphlet What Shall Be Done With the Free Negroes (1851), Fitzhugh advocated enslavement of free African Americans.

Fitzhugh reveled in the controversy he created. He was an amateur in the sense that he assiduously but informally studied the issues on which he wrote. John Taylor of Caroline influenced Fitzhugh, particularly in taking economic approaches to social problems. Fitzhugh subscribed to about a half-dozen British reviews of political economy and from them absorbed conservative thought including that of Scottish essayist and historian Thomas Carlyle. Fitzhugh imitated Carlyle’s florid and energetic style. He corresponded with ideological foes, including the abolitionists Gerrit Smith, to whom he was distantly related, and William Lloyd Garrison, to whom he declared, “If history, human experience, and statistics prove the evils of free society to be less than the evils of slave society, slavery should be abolished.” Fitzhugh also subscribed to Garrison’s abolitionist newspaper, The Liberator.

The two books for which Fitzhugh is best known are Sociology for the South, or the Failure of Free Society (1854) and Cannibals All! or, Slaves Without Masters (1857). In Sociology for the South, the first American imprint to include the relatively new word sociology in the title, he argued that free society was a failure because free trade and free labor created social antagonisms that endangered civilization. Fitzhugh wrote that Adam Smith had failed to grasp the damage free markets did to unprotected workers and rejected John Locke’s social contract theory, arguing that slavery afforded protections to enslaved workers by creating reciprocal social interests between them and their owners. In Cannibals All! Fitzhugh went further, asserting that slavery was biblically based and argued that capitalism made workers into slaves of capitalists. Capitalists were cannibals.

Fitzhugh advocated slavery in the abstract, not merely for people of African descent. He wrote, “To defend and justify mere negro slavery, and condemn other forms of slavery, is to give up expressly the whole cause of the South—for mulattoes, quadroons, and men with as white skins as any of us, may legally be, and in fact are, held in slavery in every State of the South.” That statement reflected the social realities of the antebellum Chesapeake, in which the oldest-reproducing slave society in North America was a multiethnic mix of people of European, Native American, and African descent. Fitzhugh disagreed with the theological justifications for slavery espoused by clergyman James Henley Thornwell and rejected the proslavery ethnology of physician Josiah Nott. Fitzhugh was not colorblind, however. He argued that a black man possesses “neither energy nor enterprise” and that “his liberty is a curse to himself, and a greater curse to the society around him.”

Sociology for the South brought Fitzhugh notoriety, and in March 1855 he received an invitation to debate the abolitionist Wendell Phillips in New Haven, Connecticut. That was the first time Fitzhugh traveled north of the Potomac River and into the free society he disparaged. Phillips and Fitzhugh spoke on alternating evenings, and after touring parts of New York and New England, the Virginian returned home more firm in his convictions than ever. He embarked on a more-ambitious writing career, taking a wide variety of issues as subjects for a broad southern audience. Fitzhugh published more than ninety articles and essays in De Bow’s Review and the Southern Literary Messenger between 1855 and 1867 on a range of topics including culture, genealogy, history, foreign affairs, political economy, travel, and social and political issues of the day such as slavery, the Civil War, and Reconstruction. After the war, he also published articles in Lippincott’s Magazine and the Southern Magazine. The essays in De Bow’s Review constitute the main body of his work, but Sociology for the South and Cannibals All! have overshadowed them.

Fitzhugh was a bold and ambitious writer, not tempering his generalizations with qualifications or admitting the legitimacy of alternative arguments. He received national attention as a proslavery extremist, and his writings exacerbated tensions between the North and South in the 1850s. White southern partisans heaped praise on Fitzhugh’s writings while northern abolitionists and antislavery leaders feared that he spoke for the entire South. He did not share the social standing of other proslavery writers such as South Carolina’s James Henry Hammond or his own Tidewater neighbor Edmund Ruffin. Fitzhugh began an energetic correspondence with George Frederick Holmes, later a University of Virginia professor, who favorably reviewed Sociology for the South. In his correspondence, Fitzhugh privately cast doubt on his proslavery invective. He admitted that he was no friend of slavery or the slave trade, which he regarded as necessary evils, but he confessed that he ought not to admit as much in print.

Partly because Fitzhugh neglected his law practice in order to write, in 1857 he sought a patronage appointment in the administration of President James Buchanan and took a temporary salaried job in the attorney general’s office in Washington, D.C. In 1860 Fitzhugh launched a lecture tour advocating southern self-sufficiency and ridiculing northern editors. By then his dedication to writing had taken its toll on his finances. The Fitzhughs then owned considerably less property than ten years before. The 1860 census taker recorded that they owned eight slaves, nearly twenty fewer than in 1850, and his wife was listed as their owner. Fitzhugh’s defenses of domestic slavery had perhaps compelled him to sell some of his human property.

Fitzhugh supported secession and during the Civil War contended that the Southern cause was a conservative revolution to repudiate dangerous Enlightenment principles he supposed underpinned the American Revolution (1775–1783). During the war, he served as a clerk in the Confederate Treasury Department in Richmond and afterward sat as an associate judge for the court of the Bureau of Refugees, Freedmen, and Abandoned Lands (generally known as the Freedmen’s Bureau) in the city. Fitzhugh’s postwar writings denigrated African Americans’ abilities and argued that education would unfit them for manual labor. Opposing Reconstruction policies that promised benefits to the formerly enslaved population, Fitzhugh contended that southern whites were best able to manage race relations without outside interference. He reversed course on capitalism’s pernicious effects, arguing that “the monopoly of property, or capital, by the few” was “the only means of begetting, sustaining and advancing civilization.”