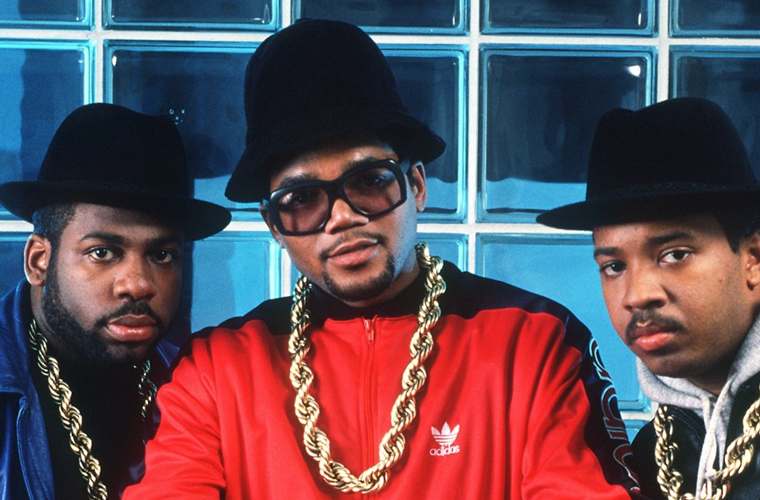 Formed in 1982 in Hollis—a middle-class, predominantly African American section of the New York City borough Queens—Run-DMC was managed by Russell Simmons, who was the brother of group member Run and was a co-founder of Def Jam, one of the most successful black-owned record companies. Run, whose nickname came from his quick turntable manipulation, began his musical career as a deejay for old-school rapper Kurtis Blow. Later Run, DMC, and Jam Master Jay began performing in New York City clubs. In 1983 Profile Records released the group’s groundbreaking single “It’s Like That”/“Sucker MCs,” which featured a spare, forceful rhythm track and overlapping vocals (group members interweaving lines and words). Not only was their sound different, so, too, but was also their dress. Whereas earlier rap stars fashioned their looks after the spangled superhero costumes of 1970s funk acts like Parliament-Funkadelic and Rick James, Run-DMC appeared in their signature bowler hats, black leather jackets, unlaced Adidas athletic shoes, and black denim pants, establishing the more casual look of hip urban youth as de rigueur stage wear for rappers.

They were the first rappers to have a gold album—Run-D.M.C. (1984)—and the first rap act to appear on MTV, becoming popular with the cable channel’s largely white audience via their fusion of hardcore hip-hop and screaming guitar solos on hits such as “Rock Box” (1984) and a 1986 remake of Aerosmith’s “Walk This Way” (featuring the song’s hard-rocking originators). Other hits by Run-DMC included “King of Rock” (1985), “My Adidas” (1986), which led to the first endorsement deal between hip-hop artists and a major corporation, and “It’s Tricky” (1987). Although the group never officially disbanded, their recording and performing activities decreased significantly in the 1990s. In 2002 Jam Master Jay was fatally shot at a recording studio in Jamaica, Queens. Run-DMC was inducted into the Rock and Roll Hall of Fame in 2009 and received a Grammy Award for lifetime achievement in 2016.