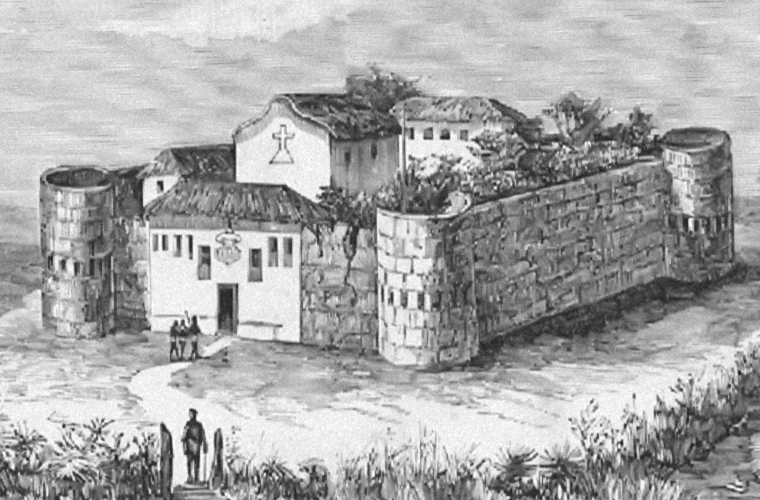 The “ Fortress of São João Baptista de Ajudá ”, also referred to as “ Feitoria de Ajudá ” or simply “ Ajudá ”, is located in the city of Ouidah, in Benin, on the west coast of Africa.

São João Baptista d’Ajuda was a small Portuguese colonial enclave with about 4.5 square kilometers, consisting of a factory and its surroundings, where authority was exercised by the overseer. It was the smallest colonial territory in the world. (” The Guinness Book of Records “. London: Guinness Superlatives Limited, 1958; S. 81: “The smallest colony in the world is the Portuguese enclave in the French West African Territory of Dahomey consisting of the Fort of St. John the Baptist (S. Joao Batista de Ajuda). This has been occupied since 1680 and is garrisoned by one officer and a few men. “)

History
The coasts of Mina and Guinea have been traveled by Portuguese navigators since the 15th century, which, over time, began to develop important trade there, mainly from African slaves, it is from this period that the rise of the ancient kingdom of Dahomey dates back to the importance of its capital, Abomei (or Abomé).

At the end of the 18th century, Pedro II of Portugal (1667-1705) ordered the Governor of São Tomé and Príncipe, Jacinto de Figueiredo and Abreu, to erect a fortification in the town of Ouidah, to protect slave shipments (1680 or 1681). This was built after the settlement that existed on the site had been razed, by order of the king of Ajudá, ” (…) making more than 50 of his vassals work under the command of all that within three days everything was demolished and disentangled “. (“ Documents of [Fortress of São João Baptista de Ajudá] the Portuguese Archives that Import to Brazil”, 1946, nrs. 12‐14). Later abandoned on an uncertain date, it was succeeded between 1721 and 1730 by a new structure, with the works in charge of the Brazilian slave trader José de Torres. Under the invocation of São João Baptista, the construction of the Ouidah fort (Ajudá) was financed by capital raised by the merchants of the captaincy of Bahia, by charging a tax on African slaves landed in the city of Salvador.

Completed, it functioned as a commercial center for the region, exchanging Brazilian tobacco, whelks, and spirits, and later, when the trafficking scheme changed, offering European manufactured products, smuggled from the State of Brazil, since the Portuguese Crown did not allow such items were transported on ships from that American colony. Its importance was attested by the fact that Portuguese was the only foreign language authorized by the kings of Dahomey.

In January 1722 the pirate Bartholomew Roberts (” Black Bart “) entered his port and seized all eleven vessels at anchor.

It is represented in the plan by the military engineer José António Caldas (“Plan of the Fort of S. Joam de Ajudá q ‘is located in a legua by the land within the domain of El Rei da Homé, whose cannoneers are in the shape of port hatches. Copied by Joze Antonio Caldas on August 15, 1759. ”), who referred to Ajudá said:

“ This port of Ajudá has a great deal in the slave trade and is the most frequented of all the nasoens that sail for that Coast. In it, there are three Fortresses, namely Ingleza, Franceza and Portugueza, far from the hua legua beach, and for this reason, they are subject to the insults of the King of Homé. The coast runs to Le [Fortress of São João Baptista de Ajudá] snordeste and appears in the said port in nine embers, bottom of mud ”(CALDAS, 1951: 490)

With the prohibition of the slave trade in the British Empire ( Slave Trade Act, 1807) and, subsequently, the abolition of slavery in the Portuguese Empire (law of 25 February 1869), the fortification began to lose importance.

In 1844 to the Governor of the Province of São Tomé and Príncipe, José Maria Marques ” (…) it weighed him like a good Portuguese, that that fort was abandoned and sent an officer to command it and an elder to administer it on the spiritual side. “(MENDONÇA, João de. ” Portuguese Colonies and Possessions ‘ ‘. Lisbon, 1877.)

Between 1858 and 1861, he was abandoned by the Portuguese and was ceded by the sovereign of Daomé to French missionaries who occupied him between 1861 and 1865.

The fort was reoccupied by Portugal in 1865, under the authority of the governor of the archipelago of São Tomé and Príncipe. At this time it served as the basis for a brief Portuguese attempt to establish a protectorate in the kingdom of Dahomey, of which the city of Hweda (Ajudá – Ouidah) was part (1885–1887).

Daomé was conquered by French forces (1891–1894). At the end of the 19th century, the West African coast was occupied by the English, who established important warehouses there, which began to be defended by the garrisons of the fortifications previously belonging to Portugal, including that of São João Baptista de Ajudá.

In 1911, after the Proclamation of the Portuguese Republic, the new government permanently removed the military garrison assigned to the fort of São João Baptista, replacing it for [Fortress of São João Baptista de Ajudá] the presence of two colonial officials. According to the 1921 Census data, there were five inhabitants in the enclave, namely in the fortress.

Daomé became a French colony in 1892, gaining independence on August 1, 1960, when it became the Republic of Benin. The following year, troops from Benin invaded Ouidah, then a dependency on the Portuguese colony of São Tomé and Príncipe, urging Portuguese occupants of the fort (at the time, only two) to abandon it until July 31 of the same year. Unable to offer resistance, the government of Oliveira Salazar ordered the last residents of the square to set it on fire before abandoning it, which was accomplished by the deadline.

In 1965, the symbolic closure of the fort was promoted by the authorities of Dahomey, and their premises came to host the Ouidah History Museum, under the administration of the Republic of Benin (1967).

The annexation was only formally recognized by Portugal after the Carnation Revolution (1974), and the restoration and restoration work was carried out in 1987, with guidance and resources from the Calouste Gulbenkian Foundation.

The great descent left by one of the overseers of the fortress in the 19th century, Francisco Félix de Souza, inspired a novel by the British writer Bruce Chatwin. Currently spread across Africa, the De Souza have given Benin several prominent figures. One of the great avenues of Cotonou, the economic capital, is called Avenida Monsenhor De Souza.