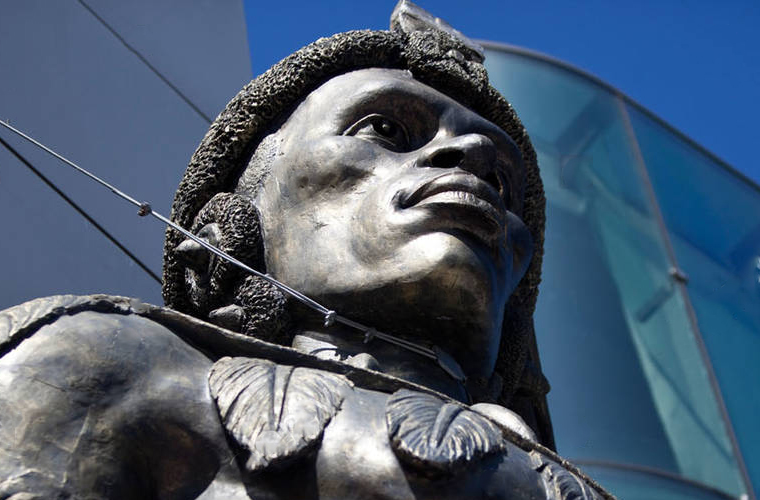 Shaka also spelled Chaka or Tshaka, (born c. 1787—died Sept. 22, 1828), Zulu chief (1816–28), founder of Southern Africa’s Zulu Empire. He is credited with creating a fighting force that devastated the entire region. His life is the subject of numerous colorful and exaggerated stories, many of which are debated by historians.

Shaka was the son of Senzangakona, chieftain of the Zulu, and Nandi, an orphaned princess of the neighboring Langeni clan. Because his parents belonged to the same clan, their marriage violated Zulu custom, and the stigma of this extended to the child. The couple separated when Shaka was six, and Nandi took her son back to the Langeni, where he passed a fatherless boyhood among a people who despised his mother. In 1802 the Langeni drove Nandi out, and she finally found shelter with the Dletsheni, a subclan of the powerful Mthethwa. When Shaka was 23, Dingiswayo, the Mthethwa paramount chieftain, called up Shaka’s Dletsheni age group for military service. For the next six years, he served with brilliance as a warrior of the Mthethwa Empire. Senzangakona died in 1816, and Dingiswayo released Shaka from service and sent him to take over the Zulu, which at this time probably numbered fewer than 1,500, occupying an area on the White Umfolozi River. They were among the smallest of the more than 800 Eastern Nguni–Bantu clans, but from the day of Shaka’s arrival they commenced their march to greatness. Shaka ruled with an iron hand from the outset, meting out instant death for the slightest opposition.

His first act was to reorganize the army. Like all the clans, the Zulu were armed with oxhide shields and spindly throwing spears. Battles were little more than brief and relatively bloodless clashes in which the outnumbered side prudently gave way before extensive casualties occurred. Shaka first rearmed his men with long-bladed, short-hafted stabbing assegais, which forced them to fight at close quarters. He then instituted the regimental system based on age groups, quartered at separate kraals (villages) and distinguished by uniform markings on shields and by various combinations of headdress and ornaments. He developed standard tactics, which the Zulu used in every battle. The available regiments (known collectively as the impi) were divided into four groups. The strongest termed the “chest,” closed with the enemy to pin him down while two “horns” raced out to encircle and attack the foe from behind. A reserve, known as the “loins,” was seated nearby, with its back to the battle so as not to become unduly excited, and could be sent to reinforce any part of the ring if the enemy threatened to break out. The battle was supervised by indunas, or officers, who used hand signals to direct the regiments. An impi consistently covered 50 miles (80 km) a day, living off grain and cattle requisitioned from the kraals it passed and accompanied by boys who carried the Warriors’ sleeping mats and cooking pots.

Shaka fought for extermination, incorporating the remnants of the clans he smashed into the Zulu. He first decimated the small clans in his vicinity, starting with the Langeni; he sought out the men who had made his boyhood a misery and impaled them on the sharpened stakes of their own kraal fences. In less than a year, the Zulu—and their army—had quadrupled in number. In 1817 Dingiswayo—still Shaka’s overlord—was murdered, and the last restraint on Zulu expansion was removed.

Within two years Shaka bested the only clans large enough to threaten him, the Ndwandwe and the Qwabe, and in a series of annual campaigns he then struck at and smashed the complex network of clans living to the south of the Zulu territories. By 1823 the region was a depopulated ruin of smoking kraals, and the terrified survivors had broken up tribal patterns as far away as the Cape Colony.

Although Shaka’s depredations were limited to the coastal area, they led indirectly to the Mfecane (“Crushing”) that devastated the inland plateau in the early 1820s. Marauding clans, fleeing the Zulu wrath and searching for land, started a deadly game of musical chairs that broke the clan structure of the interior and left two million dead in its wake. The Boer Great Trek of the 1830s passed through this area, succeeding only because virtually no one was left to oppose them.

The first Europeans arrived in Port Natal (present-day Durban) in 1824. A dozen settlers of the Farewell Trading Company established a post on the landlocked bay and soon made contact with Shaka, whose kraal Bulawayo lay 100 miles (160 km) to the north. Fascinated by their ways and their artifacts but convinced that his own civilization was much superior, he permitted them to stay. Two of the early settlers, Henry Francis Fynn and Nathaniel Isaacs, became fluent Zulu linguists, and most of what is known of early Nguni history stems from their writings.

In 1827 Nandi died, and with his mother’s death, Shaka became openly psychotic. About 7,000 Zulus were killed in the initial paroxysm of his grief, and for a year no crops were planted, nor could milk—the basis of the Zulu diet staple—be used. All women found pregnant were slain with their husbands, as were thousands of milch cows so that even the calves might know what it was to lose a mother.

Early in 1828, Shaka sent the impi south in a raid that carried the warriors clear to the borders of the Cape Colony. They had no sooner returned, expecting the usual season’s rest, than he sent them off to raid far in the north. It was too much for his associates, and two of his half-brothers, Dingane and Mhlangana, together with an induna named Mbopa, murdered him in September of that year.