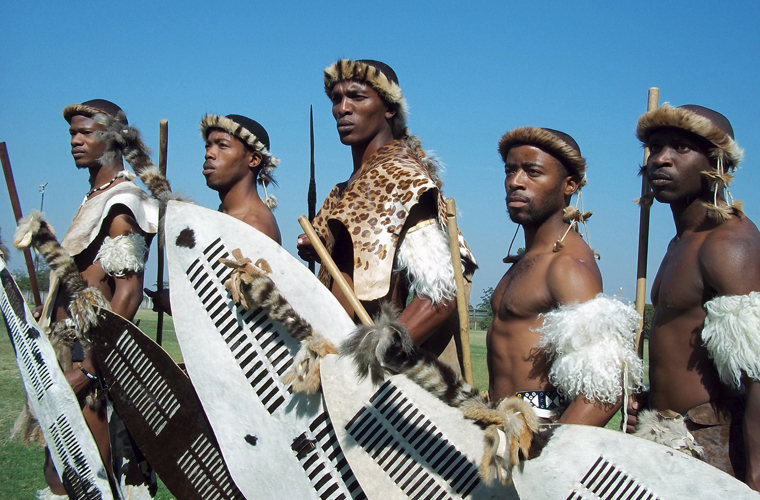 Zulu, a nation of Nguni-speaking people in KwaZulu-Natal province, South Africa. They are a branch of the southern Bantu and have close ethnic, linguistic, and cultural ties with the Swazi and Xhosa. The Zulu are the single largest ethnic group in South Africa and numbered about nine million in the late 20th century.

Traditionally grain farmers, they also kept large herds of cattle on the lightly wooded grasslands, replenishing their herds mainly by raiding their neighbors. European settlers wrested grazing and water resources from the Zulu in prolonged warfare during the 19th century, and, with much of their wealth lost, modern Zulu depend largely on wage labor on farms owned by individuals of European descent or work in the cities of South Africa.

Before they joined with the neighboring Natal Nguni under their leader Shaka in the early 19th century to form a Zulu empire, the Zulu were only one of many Nguni clans; Shaka gave the clan name to the new nation. Such clans continue to be a basic unit of Zulu social organization; they comprise several patrilineal households, each with rights in its own fields and herds and under the domestic authority of its senior man. Paternal authority is so strong that the Zulu may be called patriarchal. Polygyny is practiced; a man’s wives are ranked by strict seniority under the “great wife,” the mother of his heir. The levirate, in which a widow goes to live with a deceased husband’s brother and continues to bear children in the name of the dead husband, is also practiced.

The genealogically senior man of each clan is its chief, traditionally its leader in war and its judge in peace. Headmen (induna), usually close kin of the chief, continue to have charge of sections of the clan. This clan system was adopted nationwide under the Zulu king, to whom most clan chiefs are related in one way or another. When the Zulu nation was formed, many chiefs were married to women of a royal clan or were royal kinsmen installed to replace dissident clan heads. The king relied on confidential advisers, and chiefs and subchiefs formed a council to advise him on administrative and judicial matters.

Boys in this highly organized military society were initiated at adolescence in groups called age sets. Each age set constituted a unit of the Zulu army and was stationed away from home at royal barracks under the direct control of the king. Formed into regiments (impi), these men could marry only when the king gave permission to the age set as a whole.

Traditional Zulu religion was based on ancestor worship and on beliefs in a creator god, witches, and sorcerers. The king was responsible for all national magic and rainmaking; rites performed by the king on behalf of the entire nation (at planting season, in war, drought, or famine) centered on the ancestors of the royal line. Modern Zulu Christianity has been marked by the growth of independent or separatist churches under prophets, some of great wealth and influence.

The power and importance of the king, chiefs, and military system have declined substantially, and many of the young men leave KwaZulu-Natal to seek work elsewhere in South Africa. Knowledge of and strong pride in traditional culture and history are, however, almost universal among contemporary Zulu.