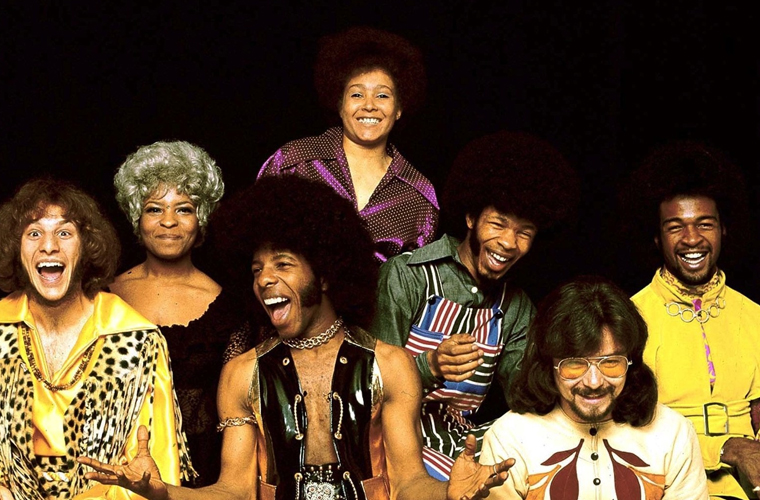 The band’s style combined a range of influences (including rock, funk, jazz, psychedelic rock, standards, and nursery rhymes) with the spirit of a Pentecostal church revival and produced some of the era’s most energizing and compelling songs. “Everyday People” and “Thank You (Falletinme Be Mice Elf Agin)”—both of which reached number one on the pop and rhythm-and-blues charts—as well as “Hot Fun in the Summertime” and “I Want to Take You Higher” all became classics of popular music.

Based in the San Francisco Bay area, the unpredictable and innovative Family Stone was one of the first acts to feature blacks and whites and men and women all performing and singing simultaneously. The loud colors and individualistic dress of the players reflected and influenced the counterculture of the 1960s; musically, Sly and the Family Stone laid the foundation for much of the street funk, soul, and disco music of the 1970s.

Raised in a churchgoing family in Vallejo, the charismatic Sylvester Stewart learned to perform at an early age. He established himself in the Bay Area music industry by working at Autumn Records producing national pop hits for Bobby Freeman (“C’mon and Swim”) in 1964 and the Beau Brummels (“Laugh Laugh”) in 1965. He was among the area’s top soul music deejays when, adopting his radio name, Sly Stone, he founded the Family Stone in 1967. The group comprised his brother Freddie (guitar) and younger sister Rose (piano), trumpeter Robinson, saxophonist Martini, drummer Errico, and bassist Graham.

Signed to Epic in 1967, the band scored its first charting single with the raucous “Dance to the Music” in 1968. That smash hit led to a national tour and television appearances. In 1969 Sly captured the moods of the nation with the Stand! the album, which showcased an unprecedented combination of joy, optimism, and rage and established Sly Stone as a lightning rod for social commentary. The band’s engaging performance at the Woodstock festival in August 1969 was a high point of the legendary concert and the zenith of Sly’s career.

The 1970 release of Greatest Hits provided the band’s second gold album, but Sly was faltering—delving into drugs and missing concerts. He returned with the single “Family Affair” (number one on the pop and rhythm-and-blues charts) and album There’s a Riot Goin’ On in 1971, which surprised critics with its brooding, introspective tone.

Graham, who had pioneered the funk bass style of “thumping” and “plucking,” left the band in 1972 to form his own successful group, Graham Central Station, and later to pursue a solo singing career. With a new bassist, Rusty Allen, Sly produced his final gold album, Fresh, in 1973, but thereafter recordings and sales dropped sharply.

Interest in Sly Stone resurfaced with the “sampling” of many of his songs (and Graham’s bass lines) by hip-hop producers in the 1990s. Sly and the Family Stone were inducted into the Rock and Roll Hall of Fame in 1993.