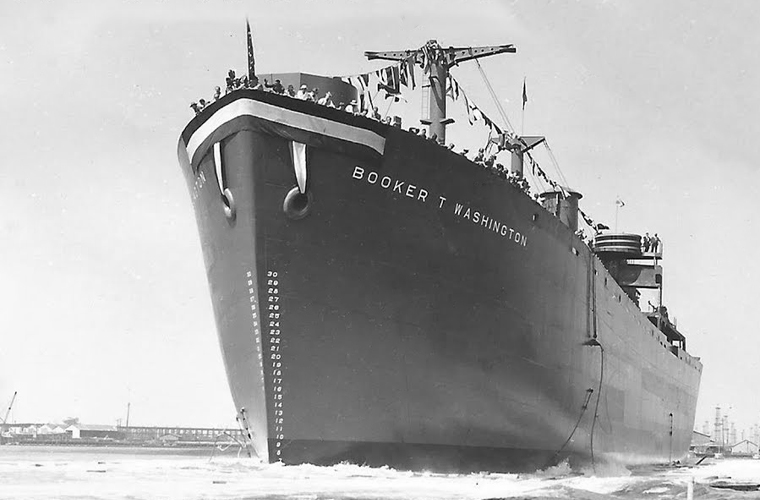 SS Booker T. Washington, which had been built by California Shipbuilding Corporation, was launched at the company’s yards in the Los Angeles neighborhood of Wilmington in September 1942. The ship though it was only one of more than 2,700 standardized, mass-produced Liberty ships built in the United States during World War II to serve as cargo vessels for the Allies, had the additional distinction of being the first of 17 of those vessels named after an African-American. The Liberty ships came to symbolize large-scale U.S. industrial productivity throughout the war, and SS Booker T. Washington was named after the renowned educator, author, and civil rights leader.

The celebrated singer Marian Anderson, who had already established herself by that time as a trailblazer for African-American artists, participated in the launching. She smashed the traditional bottle of champagne over the forward-most part of the ship known as the prow. In addition, Anderson sang “The Star-Spangled Banner” while a crew sent the ship sliding into the harbor.

The new vessel achieved another noteworthy claim to fame at the time when her captain, 56-year-old Hugh Mulzac – who had been born in the British West Indies but became an American citizen in 1918 – made history as the first African-American to command a ship in the U.S. Merchant Marine. Mulzac ended up commanding an integrated crew of 18 nationalities on board SS Booker T. Washington. He was captain of the ship for four years.

SS Booker T. Washington served the U.S. military for the remainder of the war and a couple of years beyond it. She made 22 round-trip voyages and ferried troops and supplies to Europe and the Pacific.