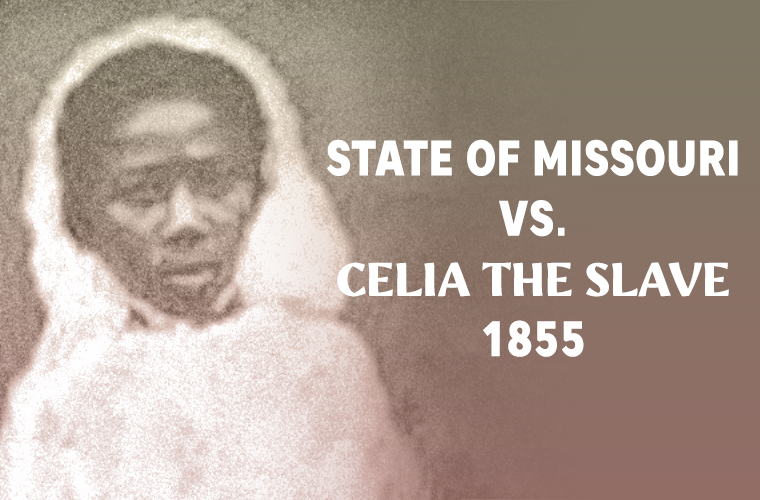 SIGNIFICANCE: This case graphically illustrates that enslaved women had no legal recourse when raped by their masters. Although the second article of Section 29 of the Missouri statutes of 1845 forbade anyone “to take any woman unlawfully against her will and by force, menace or duress, compel her to be defiled,” Judge William Hall refused to instruct the jury that the enslaved Celia fell within the meaning of “any woman”—giving the jury no latitude to consider Celia’s murder of her sexually abusive master a justifiable act of self-defense.

In 1850, the recently widowed Robert Newsom purchased the 14-year-old Celia, ostensibly to help his daughters with the housework. En route from Audrain County, the site of the transaction, to his own home in neighboring Calloway County, Missouri, Newsom raped the young girl. Back at his farm, Newsom ensconced her in a small cabin 150 feet from his home. Between 1850 and 1855, Celia bore two of Newsom’s children, both of whom became her master’s property. She also began a relationship with a fellow slave named George. When she became pregnant in 1855, she was unsure which of the men was the father. At that point, George told Celia that “he would have nothing more to do with her if she did not quit the old man.”

Celia first asked Newsom’s daughters to intercede. She told Mary (19 years old, as was Celia in 1855) and Virginia (36 and returned to her father’s home with her own three children) that her pregnancy was making her feel unwell and that she wished Robert Newsom to respect her condition and leave her alone. There is no indication that either Newsom daughter challenged her father.

Celia herself pleaded with Newsom on June 23, but he brushed aside her objections and said: “he was coming to her cabin that night.” That afternoon, Celia brought a heavy stick, “about as large as the upper part of a Windsor chair, but not so long,” into her cabin. When Newsom arrived and refused to back off, she killed him with two blows to the head. She spent the night burning his corpse in her fireplace. As morning approached, she ground the smaller bones into pieces with a rock; the larger bones, she hid “under the hearth, and under the floor between a sleeper and the fireplace.” Later that day, she gave Newsom’s unwitting grandson, Virginia’s son Coffee Waynescot, “two dozen walnuts [to] carry the ashes out.” Coffee disposed of his grandfather’s remains on the ground beside “a beat down like” path on the property.
Celia Speaks

By Sunday, June 24, Newsom’s family and neighbors had become concerned. They first questioned George, who quickly implicated Celia. (George afterward ran away.) Harry and David Newsom, Robert’s sons, had come from their own homes to investigate; with Robert’s neighbor William Powell, they demanded a confession from Celia. She at first denied any involvement. Then, afraid of Harry’s and David’s reactions, she told Powell she would confess if he would “send the two men out of the room.” They left, and Celia told her story to Powell. Powell and the Newsom family then examined the fireplace, where Virginia located “buttons my sister [Mary] sewed on my father’s breeches a few days before his death,” and various splinters of bone. Newsom’s larger bones were then recovered from the hiding space beneath the hearth.

On June 25, David Newsom delivered his affidavit to two local justices of the peace, D.M. Whyte and Isaac P. Howe. The affidavit stated that David Newsom “has cause to suspect and believe that one Negro woman named Celia a Slave of the said Robert Newsom did at the county aforesaid feloniously, willfully, and with malice aforethought with a club or some other weapon strike and mortally wound the said Robert Newsom, of which wound or wounds the said Robert Newsom instantly died.” Celia was arrested and “deliver[ed] … forthwith to the keeper of the common jail of said County to await her trial.”

Because white Calloway County residents were afraid Celia might have had help from another slave or slaves still at large, County Sheriff William T. Snell permitted two men, Thomas Shoatman and Jefferson Jones, to interrogate Celia. All of the above information about Celia’s life on the Newsom farm comes from her interviews with William Powell, Jefferson Jones, and Thomas Shoatman. It does not come from Celia’s trial testimony because she gave none. In the 19th century, blacks generally were not allowed to testify in criminal trials.

The Trial Begins
Celia’s trial began on October 9, 1855. Her court-appointed attorneys, Isaac M. Boulware, John Jameson, and Nathan Chapman Kouns, seem to have given the most vigorous defense possible. On her behalf, they pleaded not guilty and described Celia as one who was “ready for trial, and prayed herself upon her God and her Country.”

On October 10, prosecutor Robert Prewitt called Jefferson Jones to the stand. Jones recited for the court the account that Celia had given to him several months earlier. He said that Celia said she “had been having sexual intercourse” with her master and that George had threatened to leave her if these relations continued. When Jameson cross-examined Jones about Celia’s account of the rape on the day of Newsom’s purchase, Newsom’s sexual demands during the following five years, and the birth of her two children fathered by Newsom, Jones said that he couldn’t “say positively whether Celia said the accused had forced her on the way home” and couldn’t “know with certainty whether she told me so.”

Robert Newsom’s daughter, Virginia Waynescot, was called by the prosecutor, and she described the discovery of some of her father’s remains. Jameson then cross-examined her and tried tactfully and not very successfully to examine the relationship between her father and the enslaved Celia. Asked where her father customarily slept, Virginia replied: “[I] did not notice the [Newsom’s] bed. Sister made the bed up.” Virginia did, however, disclose that Celia “took sick in February. Had been sick ever since.” Virginia’s son, Coffee Waynescot, then testified about his disposal of his grandfather’s ashes. On cross-examination, Jameson tried—again, with tact and with little success—to elicit information about the sexual relationship between Newsom and Celia.

William Powell was the next witness. For the prosecution, he related Celia’s detailed confession that she had killed Newsom. During his cross-examination of Powell, Jameson abandoned the reticence he had shown to Newsom’s daughter and grandson. Powell testified that Celia had told him of Newsom’s misconduct and of her pleas to Newsom’s daughters for intercession. He also testified that Celia had claimed to act only from a desperate wish to end Newsom’s sexual demands.

Jameson called Dr. James M. Martin, a Fulton doctor, to testify. All of Jameson’s questions to Dr. Martin concerning how long it would take to burn an adult human body brought objections from the prosecutor, which were sustained by Judge William Hall. Thomas Shoatman then testified for the defense, saying “the reason she gave for striking him the second blow was that he threw up his hands to catch her” and “only to hurt him, to keep him from having sexual intercourse with her.” Judge Hall ordered both of these statements stricken from the record.

Jameson had valiantly tried to bring Celia’s motives before the jury, and the prosecutor had fought to keep her motives from consideration. Slaves had the legal right to preserve their lives, even if the use of deadly force was required. Moreover, according to Missouri law, it was a crime “to take any woman unlawfully against her will and by force, menace, or duress, compel her to be defiled.” A homicide committed while warding off such a crime against one’s person was justifiable. Therefore, when it was time for both the prosecuting and defending attorneys to present Judge Hall with proposed instructions for the jury, Jameson asked that the jury is instructed that “if they … believe from the testimony, that the said Newsom at the time of the said killing, attempted to compel her against her will to sexual intercourse with him, they will not find her guilty of murder in the first degree.” He also asked that “the words ‘any woman'” in the Missouri rape statute quoted above, “embrace slave women, as well as free white women.”

Jameson’s proposed instructions challenged Missouri slave law, which held that since the owned woman was property, what we would view as the rape of an enslaved woman by someone other than her master was actually considered trespass. And, as Melton McLaurin summarizes the legal quandary posed by this definition, “an owner could hardly be charged with trespassing upon his own property.”

Judge Hall refused to present Jameson’s self-defense arguments to the jury. On October 10, 1855, Celia was found guilty and ordered: “hanged by the neck until dead on the sixteenth day of November 1855.” In the meantime, either during or shortly after her trial, Celia’s pregnancy ended in a stillbirth.
On to the Missouri Supreme Court

Jameson appealed to the Missouri Supreme Court. He asked for, and expected, a stay of execution until such time as that court ruled.

The court agreed to hear the case but refused a stay of execution. Some unidentified but presumably outraged Calloway County residents “kidnapped” Celia from jail just before her scheduled execution and returned her once the date had passed. Jameson wrote a personal letter to one of the three Missouri Supreme Court justices. Two of the justices sitting in 1855—Judge William Scott and John F. Ryland—had participated in issuing the infamous, proslavery Dred Scott decision, which would be upheld by the U.S. Supreme Court in 1857. Jameson wrote to the third justice, Judge Abiel Leonard, saying Judge Hall had “cut out all means of defense,” begging for a stay of execution and pleading with the justices to “please give the matter your earliest attention.”

The Supreme Court rendered its decision on December 14, 1855:
Upon an examination of the record and proceedings of the Circuit Court of Calloway County in the above case, it is thought proper to refuse the prayer of the petitioner—there being seen upon inspection of the record aforesaid no probable cause for such appeal; nor so much doubt as to render it expedient to take the judgment of the Supreme Court thereon. It is hereby ordered by the Court, that an order for the stay of the execution, in this case, be refused.

Celia was interviewed by a Fulton Telegraph reporter on December 20. She said, “As soon as I struck him the Devil got into me, and I struck him with the stick until he was dead, and then rolled him in the fire and burnt him up.” She was hanged on December 21, 1855.