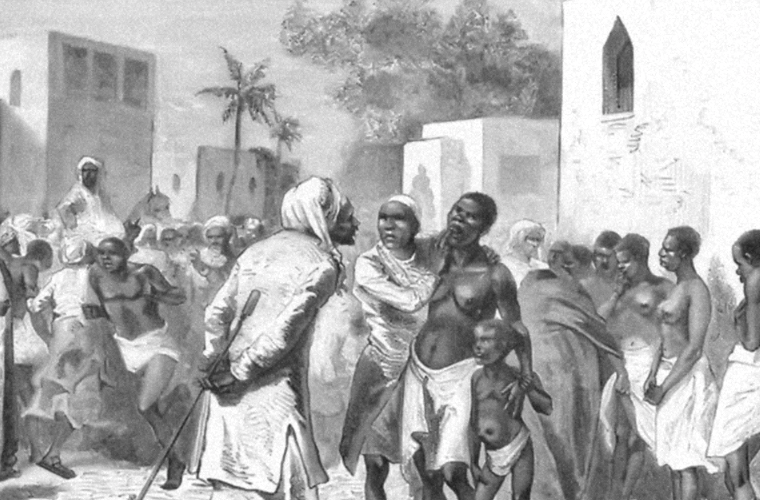 Arabs were involved in the Slave Trade in Africa during the East African Arab Slave Trade which began around the 9th Century as Muslim Arab and Swahili Traders began to dominate the Swahili Coast.

The Muslim Arab and Swahili Traders entered the African interior largely in Tanzania, Mozambique, and Kenya where they captured the local people or Zanj whom they would transport to Slave Markets on the East African Coast.

It’s been estimated that the Muslim Arab Slave Trade sold as much as 17 million people to the Middle East and North Africa via the Indian Ocean Coast circa 1500-1900.

The 17th Century saw an acceleration in the Arab East African Slave Trade when more and more Arab merchants from Oman relocated to the Island of Zanzibar as it took center stage in the brisk Swahili Coast global Trade.

Furthermore, enterprising individual Slave Traders like the infamous Tippu Tip would greatly expand the East African Slave Trade by conquering vast swathes of the African population and taking the people as slaves.

Once transported to their destination in the Middle East, the Zanj worked on Arab Estates mainly in Agriculture under inhumane conditions.

Eventually, the Zanj would find the conditions so intolerable, that the Zanj Slave rebellion broke out from 869 until 883.

The Muslim Arab Slave Trade continued to thrive until the Haitian Slave Revolt signaled the end of Slavery throughout the world.

Following the Haitian Slave Revolt, the movement for abolition gained momentum leading to the abolition of the Transatlantic Slave Trade.

Things move much slower in East Africa however, and it was only in 1873 that Zanzibar outlawed the trade despite the resistance of the Arab merchant class.

The decree banning the Trade was not followed or enforced, however, and it was only in 1909 that Savery in East Africa formally came to an end.
Modern Day Slavery In Africa

Despite the formal abolition of slavery, it’s been observed that Slavery still exists in Africa today particularly in countries like Mauritania.

Whilst the impact of the Transatlantic Slave Trade cannot be denied, equal attention should also be paid to the Muslim Arab Slave Trade in East Africa.

Its been suggested that the East African Slave Trade is not discussed in Africa as much as it should be due to the fact that the significant Muslim population in Africa would rather focus on the Western Transatlantic Slave Trade out of what can only be described as a sense of Religious loyalty.

Nevertheless, the impact of the East African Arab Slave Trade cannot and should not be underestimated or forgotten.