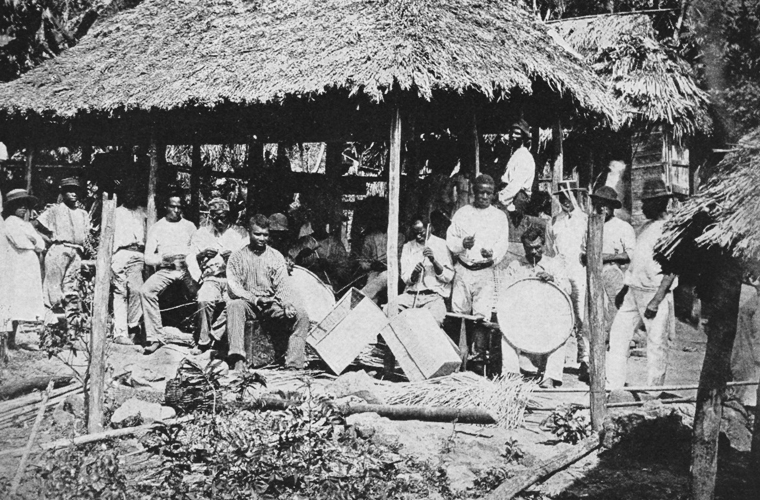 Carib, American Indian people who inhabited the Lesser Antilles and parts of the neighboring South American coast at the time of the Spanish conquest. Their name was given to the Caribbean Sea, and its Arawakan equivalent is the origin of the English word cannibal. Today the term Cariban is used to designate a linguistic group that includes not only the language of the Antillean Carib but also many related Indian languages spoken in South America.

The Island Carib, who were warlike (and allegedly cannibalistic), were immigrants from the mainland who, after driving the Arawak (q.v.) from the Lesser Antilles, were expanding when the Spanish arrived. Peculiarly, the Carib language was spoken only by the men; women spoke Arawak. Raids upon other peoples provided women who were kept as slave-wives; the male captives were tortured and killed.

The Island Carib were a maritime people, expert navigators who made distant raids in large dugout canoes. Warfare was their major interest. Internal conflicts were common; there was no important chief, military organization, or hierarchical structure. The men strove to be individualistic warriors and boasted of their heroic exploits.

Carib groups of the South American mainland lived in the Guianas, and south to the Amazon River. Some were warlike and were alleged to have practiced cannibalism, but most were less aggressive than their Antillean relatives. They lived in small autonomous settlements, growing cassava and other crops and hunting with blowgun or bow and arrow. Their culture was typical of the peoples of the tropical forest. Other Carib-speaking tribes, apparently much like the Guiana Carib, were found to the west on the wooded slopes of the Andes along the Venezuelan-Colombian border. To the southeast, the Guicuru, Bakairi, and other Carib speakers lived at the headwaters of the Xingu River in central Brazil.