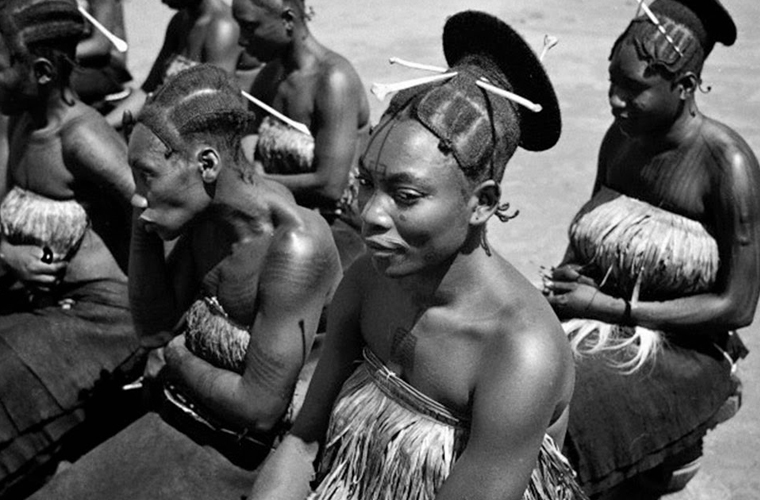 The Mangbetu stood out to European explorers because of their elongated heads.

The Mangbetu people had a distinctive look and this was partly due to their elongated heads. At birth, the heads of babies’ were tightly wrapped with cloth in order to give their heads the elongated look. The custom of skull elongation called by the natives Lipombo, was a status symbol among the Mangbetu ruling classes, it denoted majesty, beauty, power, and higher intelligence. Deformation usually begins just a month after birth for the next couple of years until the desired shape has been reached or the child rejects the apparatus.

The practice began dying out in the 1950s with the arrival of more Europeans and westernization. It was also outlawed by the Belgian government, who ruled over colonial Congo.

This skull deformation was created by tying a cloth around the head of the baby right from birth, while the cranial bone is still soft.

This deformation usually didn’t affect the brain. As long as intracranial pressure remains the same as with a normal person, the brain should be able to adapt and grow into the new shape of the skull, resulting in no damage beyond cosmetic changes. The brain is a developmentally plastic organ and grows (expands) in the shape it’s given.

Mangbetu people live in Central Africa, in northeastern Congo. The name Mangbetu refers, strictly speaking, only to the aristocracy, which in the 19th century established a number of powerful kingdoms; in looser usage, it denotes the whole amalgam of people they ruled. The Mangbetu subsist by hoe cultivation, with some fishing, hunting, and gathering. Bride-price includes a substantial gift of livestock. Polygynous marriage is everywhere accepted. Descent is patrilineal. The Mangbetu impressed early travelers with their political institutions and their arts, especially their remarkable skill as builders, potters, and sculptors. They became renowned also for their supposed cannibalism and for their practice of deforming the heads of babies.

A Mangbetu woman and her child.