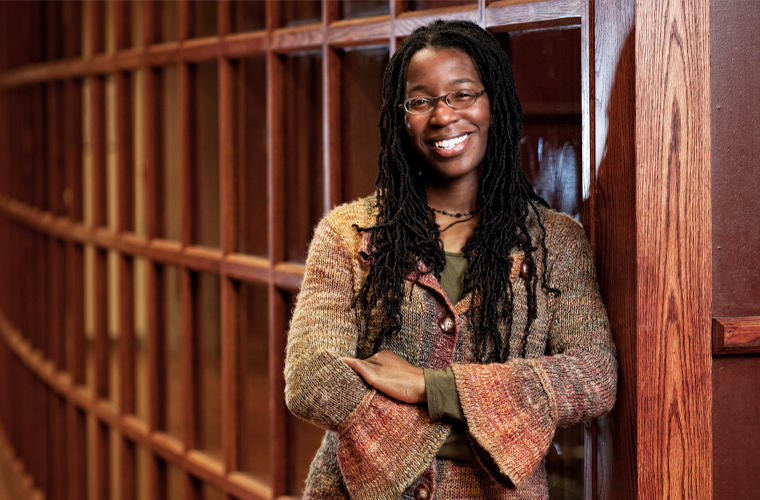 I was born and raised in Cincinnati, Ohio, where my parents and many aunts, uncles, and cousins still reside. I currently live in Cambridge, Massachusetts on a street full of old trees with my husband, the academic psychologist Joseph Gone, and our three children. When my twin daughters were young, I was an avid reader of feminist mysteries. I was then, and I am still, a fan of old houses and chocolate chip ice cream. My favorite color is purple (shading into blue).

I received my A.B. in Afro-American Studies from Harvard University (1992), my M.A. in Women’s Studies from Emory University (1995), and my Ph.D. in American Studies from the University of Minnesota (2000). I spent two years at Dartmouth College serving as the coordinator of the Shabazz African American Center and writing my dissertation with funding from the Ford Foundation and the Dartmouth College Thurgood Marshall Dissertation Fellowship. While in residence at Dartmouth, I co-organized with Stephanie Morgan and Celia Naylor the first national conference on African American and Native American relations.

My research and creative interests include African American, Native American, and American women’s histories, literature, and lives, as well as public history, public humanities, and environmental humanities. Since 2005 and Hurricane Katrina, I have been very concerned about environmental issues and climate change. As a result, I developed an environmental education and girls’ self-esteem building project called ECO Girls (Environmental and Cultural Opportunities for Girls in Urban Southeast Michigan). I also had the very good fortune of receiving a Mellon Foundation New Directions Fellowship. I used the fellowship to study environmental history at Montana State University in 2014-15, to complete my new books: The Cherokee Rose and Tales from the Haunted South.

My first book, Ties That Bind: The Story of an Afro-Cherokee Family in Slavery and Freedom, was published by the University of California Press in 2005 and received four awards from historical, humanities, American studies, and Native American studies associations, including the Frederick Jackson Turner prize from the Organization of American Historians for the best first book in American history and recognition from the Native American and Indigenous Studies Association as one of the ten most influential books of the first decade of the twenty-first century.

I am also the author of The House on Diamond Hill: A Cherokee Plantation Story, published by the University of North Carolina Press in 2010, which was awarded three historical book prizes including the best book award from the National Council on Public History. I am co-editor, with Sharon P. Holland, of Crossing Waters, Crossing Worlds: The African Diaspora in Indian Country (2006). I have published various personal essays on race, feminism, and identity as well as academic articles on women’s history and black and Native interrelated experience. In 2011 I was the amazed and grateful recipient of a MacArthur Foundation Fellowship.

I have appeared on various local and syndicated National Public Radio programs to discuss my research and comment on contemporary issues regarding race and American culture. I have written commentary for The New York Times, CNN In America, and the Huffington Post on issues ranging from Cherokee racial politics to Black History Month, to Detroit public land. In 2011 I was selected for Ebony Magazine’s Power 100 and The Grio’s 100 lists of African American leaders. I have lectured in a range of university and public venues, including the Smithsonian’s National Museum of the American Indian in Washington DC, the National Oceanic and Atmospheric Administration in Washington DC, and the historic St. Philips African Moravian Church in Winston-Salem, North Carolina. A sampling of my lectures and commentary are available on YouTube (but I am too much of a nervous Nellie to ever go watch myself!).

As a public historian, I’ve discovered and written down many stories from the past. But it wasn’t until I wrote my first novel, The Cherokee Rose, that I had the opportunity to integrate my imagination with my previous research. When I write history, I am making an unspoken promise to my readers that I will relate what I know about the past and what I can reasonably interpret as truthfully and accurately as possible. Writing fiction has its own constraints, but I used my knowledge of history as an anchor from which I could imagine the rest. I found my first foray into fiction an enjoyable, challenging, and inspiring experience and I look forward to writing the next chapter.