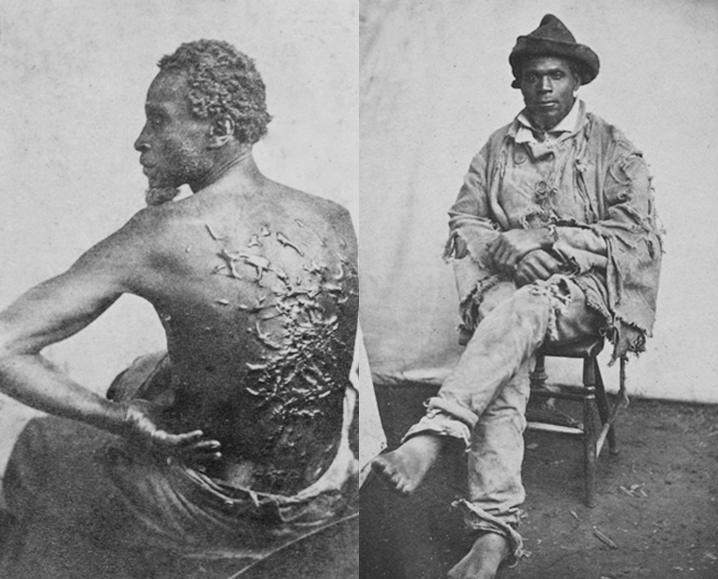 I have seen this photo for most of my life. Sad to say I only learned of the man behind this gut-wrenching image this year. Most of the features about him deal with the basics of who, when, what, where and how; however there were three things that captivated me beyond the overall escape from the bondage of the general story.

In 1863 after months of recuperation from being whipped, Gordon (or Peter) made his escape. Gordon was a slave and the property of John Lyon. Lyon owned a 3000-acre plantation located on the Atchafalaya River in Louisiana. Gordon needed two months of bed rest after being whipped by Overseer Artayou Carrier. While bedridden, Gordon plotted his escape. Upon learning of his escape, Master Lyon organized with a group of neighbors to find Gordon and re-enslave him.

After crossing a creek or a swamp, Gordon would rub onions over his body to mask his scent from the bloodhounds. After 80 miles and 10 days of running for his freedom, he reached Baton Rouge where the Union’s 47th Massachusetts Infantry was stationed.

On April 2, 1863, Gordon underwent a medical examination at the Union camp that revealed thick scars that crisscrossed his back. These grotesque scars were the result of numerous whippings he received as a slave.

There were two New Orleans-based photographers at the camp at the time and produced a carte de visite portrait of Gordon showing the mass of welts and ridges covering his back. The portrait of Gordon by William D. McPherson and his partner Mr. Oliver went on to be mass produced and appeared in Harper’s Weekly Journal, which extensively covered the American Civil War. Gordon’s portrait still continues to cause troublesome pause over a century later.

As stated earlier there are three things upon reading about Gordon that have me intrigued. First are the words from a clipping in The Liberator in June 1863. The full clipping is below but I will point out the last portion by the surgeon of the First Louisiana Colored Regiment, writing to his brother:

“I send you the picture of a slave as he appears after a whipping. I have seen, during the period I have been inspecting men for my own and other regiments, hundreds of such sights; but it may be new to you. If you know of anyone who talks about the humane manner in which the slaves are treated, please show them this picture. It is a lecture in itself.”

Even after seeing hundreds of black men in similar conditions, the surgeon knows that many outside of the south are not aware of the conditions and treatment slaves endure. It’s as though he has attempted to tell others (possibly in Boston-The Liberators home base) of the sights he has witnessed but finally he has visual proof to back up his claims. Now he can share photographic evidence of healed lacerations from merciless whippings produced upon slaves.

The second thing that intrigued me was the first-hand recollection that Gordon told of his experiences when he arrived that the Union regiment camp:

“Ten days from today I left the plantation. Overseer Artayou Carrier whipped me. I was two months in bed sore from the whipping. My master comes after I was whipped; he discharged the overseer. My master was not present. I don’t remember the whipping. I was two months in bed sore from the whipping and my sense began to come – I was sort of crazy. I tried to shoot everybody. They said so, I did not know. I did not know that I had attempted to shoot everyone; they told me so. I burned up all my clothes, but I don’t remember that. I never was this way (crazy) before. I don’t know what makes me come that way (crazy). My master come after I was whipped; saw me in bed; he discharged the overseer. They told me I attempted to shoot my wife the first one; I did not shoot anyone; I did not harm anyone. My master’s Capt. JOHN LYON, cotton planter, on Atchafalaya, near Washington, Louisiana. Whipped two months before Christmas.”

He said he was whipped two months before Christmas (October 1862). He made his 10-day escape in March 1863 (guessing) and received his medical exam in April 1863. I’m drawing attention to this time span to coincide with Gordon’s above statement to say, its more than possible enslavement, the whippings he endured in addition to the emotional torment of being on the run for 10 days; may have caused Gordon to suffer some psychotic mental ailments and or stress disorders.

Some of his “not remembering” could be contributed to possible infection and fever as a result of the whippings but 5 months is a long time to not fully remember the previous 6-7 months. Of course, this is just my theory. I’m sure Gordon suffered from PTSD before and after enlisting in the Colored Troops Civil War Unit in the XIX Corps.

How was the trauma of all that encompasses slavery dealt with by the masses of black slaves throughout America? How did it impact post-emancipation black societies and communities of those who were a couple of years or a couple of decades removed from bondage? Was or is there still a lasting effect?

The third and saddest part of this piece of American history is who really was Gordon? Did he even have a last name? All we know about him is that he was whipped in October 1862, escaped in 1863, joined the Colored Troops, was a Sergeant in the 2nd Louisiana Regiment Infantry, fought bravely during the Siege of Port Hudson in May 1863 and that’s it.

This brave, stoic man who escaped the horrors of slavery and went to war, has no end story. What was his real age? Did he survive the Civil War? If so, does he have any descendants pre or post enslavement? It’s as if without his portrait, we would have never known he existed.

One can only wonder how many men like Gordon have evaporated into oblivion, with their songs never heard?