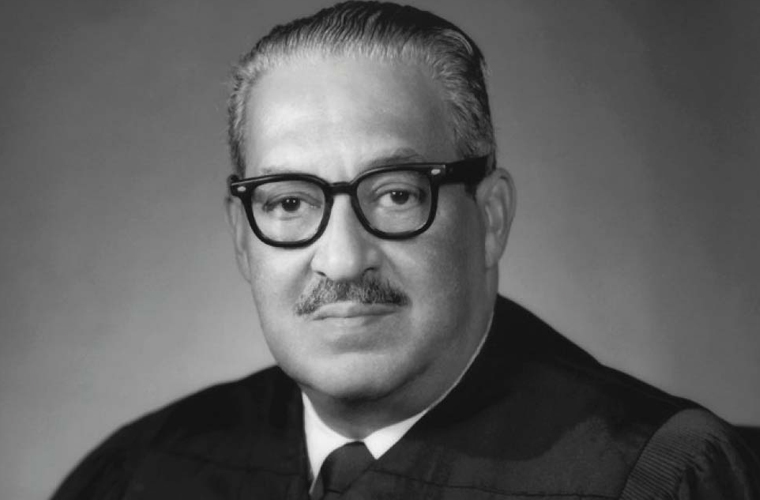 Some called Thurgood Marshall a revolutionary. Some simply called him strong-willed. Others saw him as a futurist. Either way, Thurgood Marshall was destined for greatness. Through his greatness came a legacy of equality and justice, but above all, education.

It all began in Baltimore on July 2, 1908, when a child, Thoroughgood Marshall was born. He was the great-grandson of a slave who was born in the modern-day Democratic Republic of the Congo. His grandfather was also a slave. His original name was “Thoroughgood”, but he shortened it to “Thurgood” in the second grade because he did not like spelling it. His father was William Marshall, a railroad porter, who instilled in him an appreciation for the U.S. Constitution and the rule of law.

With the U.S. Constitution and the rule of law as his guideposts, Marshall was a dedicated student. He graduated from Baltimore’s Frederick Douglass High School in 1925 and then from Lincoln University in Pennsylvania in 1930. While at Lincoln University, he was initiated as a member of the first black fraternity, Alpha Phi Alpha Fraternity, Inc. Ready to move on to law school, he sought to attend his hometown law school, the University of Maryland School of Law. But he was told he would not be accepted because of the school’s segregation policy. Later, as a civil rights lawyer, he sued the school for this policy in 1935 and won, ending segregation at the school in Murray v. Pearson.

Marshall graduated first in his class from the Howard University School of Law in 1933. Early in his career, as a young lawyer, he fought the State of Maryland for equal pay for black schoolteachers who were receiving the same salary as janitors. By 1936, he established a private practice in Baltimore where he began working with the National Association of the Advancement of Colored People (NAACP). Then, at the age of 32, Marshall won his first U.S. Supreme Court Case, Chambers v. Florida, and later that year, he was named chief counsel for the NAACP. He argued many successful cases before the U.S. Supreme Court (winning 29 of 32 cases), including Smith v. Allwright in 1944, Shelly v. Kraemer in 1948, Sweatt v. Painter in 1950, and McLaurin v. Oklahoma State Regents in 1950. But, it wasn’t until 1954, when he argued Brown v. Board of Education of Topeka, in which the U.S. Supreme Court struck down the “Separate but Equal” doctrine, thus ending legalized segregation of education institutions.

President John F. Kennedy appointed Marshall to the U.S. Court of Appeals for the Second Circuit in 1961 and he remained there until 1965. In 1965, President Lyndon B. Johnson appointed him Solicitor General. He was the first African-American to ever hold that office. Then, on June 13, 1967, President Johnson nominated him to the U.S. Supreme Court following the retirement of Justice Tom C. Clark, saying this was “the right thing to do, the right time to do it, the right man and the right place.” Marshall was confirmed as an Associate Justice by a Senate vote of 69-11 on August 30, 1967. He not only was the first African-American to hold the job, but he was also the 96th person, overall, to do so.

Marshall is noted for pointing out that “We’re in the education business,” after winning a difficult racial discrimination case against the University of Maryland. It is his commitment to education that is the foundation of the Thurgood Marshall College Fund’s (TMCF’s) vision: Changing the World…One Leader at a Time.

Justice Marshall died on January 24, 1993, at the age of 84. His legacy is equality, justice, and education for all