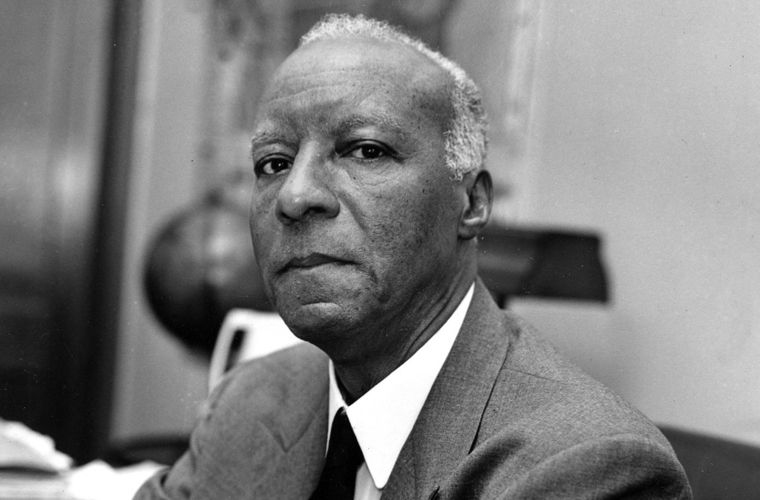 A. Philip Randolph was a trailblazing leader, organizer and social activist who championed equitable labor rights for African-American communities during the 20th century. Labor leader and social activist A. Philip Randolph was born on April 15, 1889, in Crescent City, Florida. During World War I, Randolph tried to unionize African-American shipyard workers and elevator operators and co-launched a magazine designed to encourage demand for higher wages. He later founded the Brotherhood of Sleeping Car Porters, which by 1937 would become the first official African-American labor union. In the 1940s, Randolph’s abilities as an organizer had grown to such lengths that he became the driving force in ending racial discrimination in government defense factories and desegregating the armed forces, both done via presidential decree. Becoming involved in additional civil rights work, he was a principal organizer of the 1963 March on Washington. Randolph died in New York City in 1979.
Early Life and Background

A. Philip Randolph was born Asa Philip Randolph on April 15, 1889, in Crescent City, Florida. He was the second son of James Randolph, a Methodist minister, and his wife, Elizabeth, both of whom were staunch supporters of equal rights for African Americans and general human rights. In 1891, the Randolph family moved to Jacksonville, Florida, where Asa would live for most of his youth, and where he would eventually attend the Cookman Institute, one of the first institutions of higher education for blacks in the country.

After graduating from Cookman, in 1911 Randolph moved to the Harlem neighborhood of New York City with some contemplation about becoming an actor. During this time, he studied English literature and sociology at City College; held a variety of jobs, including as an elevator operator, a porter, and a waiter; and developed his rhetorical skills. In 1912, Randolph made one of his earliest significant political moves when he founded an employment agency called the Brotherhood of Labor with Chandler Owen—a Columbia University law student who shared Randolph’s socialist political views—as a means of organizing black workers. He began his efforts when, while working as a waiter on a coastal steamship, he organized a rally against their poor living conditions.

In 1913, Randolph married an intellectual Howard University graduate and beauty shop entrepreneur named Lucille Green, and shortly thereafter organized a drama society in Harlem known as Ye Friends of Shakespeare. He would play several roles in subsequent productions by the group. In 1917, during World War I, Randolph and Owen founded a political magazine, The Messenger. They began publishing articles calling for the inclusion of more blacks in the armed forces and war industry and demanding higher wages. Randolph also tried to unionize African-American shipyard workers in Virginia and elevator operators in New York City during this time.

After the war ended, Randolph became a lecturer at the Rand School of Social Science. In the early 1920s, he unsuccessfully ran for offices in New York State on the Socialist Party ticket. Randolph would become more convinced than ever that unions would be the best way for African Americans to improve their lot.

In 1925, Randolph founded the Brotherhood of Sleeping Car Porters. Serving as its president, he sought to gain the union’s official inclusion in the American Federation of Labor, the affiliates of which, at that time, frequently barred African Americans from membership. The BSCP met with resistance primarily from the Pullman Company, which was the largest employer of blacks at that time. But Randolph battled on, and in 1937, won membership in the AFL, making the BSCP the first African-American union in the United States. Randolph withdrew the union from the AFL the following year, however, in protest of ongoing discrimination within the organization, and then turned his attention toward the federal government.

During the 1940s, Randolph twice used mass protest as a means of influencing the policies of the federal government. Following the United States’ entrance into World War II, he planned a march on Washington to protest discrimination in the war industry workforce. Randolph called off the march after President Franklin D. Roosevelt issued an executive order that banned racial discrimination at government defense factories and established the first Fair Employment Practices Committee.

In 1955, Randolph became a vice president of the newly merged entity AFL-CIO (Congress of Industrial Organizations). He would continue to protest the systemic racial prejudice he found in the organization and thus formed the Negro American Labor Council in 1959, much to the consternation of union leader George Meany. Around this time Randolph also began to devote his energies to broader civil rights work. In 1957, he organized a prayer pilgrimage to Washington, D.C. to draw attention to the delay of school desegregation being implemented in the South. He also organized the Youth Marches for Integrated Schools at the end of the decade.

In 1963, Randolph was a principal organizer of the March on Washington for Jobs and Freedom, during which he would speak to an integrated crowd of nearly 250,000 supporters. His wife Lucille having died not long before the march, he nonetheless shared the podium that day with Martin Luther King Jr., who delivered his famous “I Have a Dream” speech. Randolph and King were among the handful of civil rights leaders to meet with President John F. Kennedy after the march. With Kennedy discussing the potential Congressional push needed to strengthen the civil rights bill, Randolph told him, “It’s going to be a crusade then. And I think that nobody can lead this crusade but you, Mr. President.”

The following year, for these and other civil rights efforts, Randolph was presented with the Presidential Medal of Freedom by President Lyndon B. Johnson. Soon after, he founded the A. Philip Randolph Institute, an organization aimed at studying the causes of poverty and co-founded by Randolph’s mentee Bayard Rustin. In 1965, at a White House conference, he proposed a poverty-elimination program called the “Freedom Budget for All Americans.”

Suffering from a heart condition and high blood pressure, Randolph resigned from his more than 40-year tenure as president of the Brotherhood of Sleeping Car Porters in 1968. He also retired from public life. After being mugged by three assailants, he moved from Harlem to New York City’s Chelsea neighborhood. Never having been one to be concerned with material acquisitions or the ownership of property, Randolph spent the next few years writing his autobiography until his health worsened, forcing him to stop.

Asa Philip Randolph died in bed at his New York City home on May 16, 1979, at age 90. He was cremated, and his ashes were interred at the A. Philip Randolph Institute in Washington, D.C.