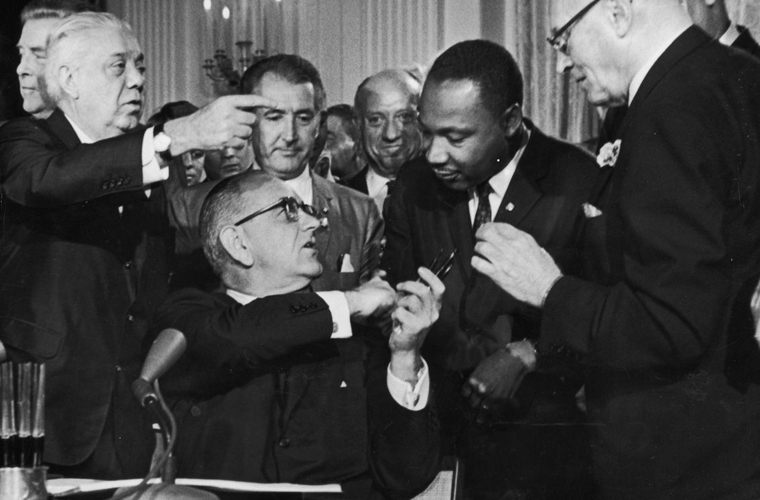 The Civil Rights Act of 1964, which ended segregation in public places and banned employment discrimination on the basis of race, color, religion, sex, or national origin, is considered one of the crowning legislative achievements of the civil rights movement. First proposed by President John F. Kennedy, it survived strong opposition from southern members of Congress and was then signed into law by Kennedy’s successor, Lyndon B. Johnson. In subsequent years, Congress expanded the act and passed additional civil rights legislation such as the Voting Rights Act of 1965.

Following the Civil War, a trio of constitutional amendments abolished slavery (the 13 Amendment), made formerly enslaved people citizens (14 Amendment), and gave all men the right to vote regardless of race (15 Amendment).

Nonetheless, many states—particularly in the South—used poll taxes, literacy tests, and other measures to keep their African American citizens essentially disenfranchised. They also enforced strict segregation through “Jim Crow” laws and condoned violence from white supremacist groups like the Ku Klux Klan.

For decades after Reconstruction, the U.S. Congress did not pass a single civil rights act. Finally, in 1957, it established a civil rights section of the Justice Department, along with a Commission on Civil Rights to investigate discriminatory conditions.

Three years later, Congress provided for court-appointed referees to help Black people register to vote. Both of these bills were strongly watered down to overcome southern resistance. When John F. Kennedy entered the White House in 1961, he initially delayed supporting new anti-discrimination measures. But with protests springing up throughout the South—including one in Birmingham, Alabama, where police brutally suppressed nonviolent demonstrators with dogs, clubs, and high-pressure fire hoses—Kennedy decided to act.

In June 1963 he proposed by far the most comprehensive civil rights legislation to date, saying the United States “will not be fully free until all of its citizens are free.” Kennedy was assassinated that November in Dallas, after which new President Lyndon B. Johnson immediately took up the cause.

“Let this session of Congress be known as the session which did more for civil rights than the last hundred sessions combined,” Johnson said in his first State of the Union address. During debate on the floor of the U.S. House of Representatives, southerners argued, among other things, that the bill unconstitutionally usurped individual liberties and states’ rights.

In a mischievous attempt to sabotage the bill, a Virginia segregationist introduced an amendment to ban employment discrimination against women. That one passed, whereas over 100 other hostile amendments were defeated. In the end, the House approved the bill with bipartisan support by a vote of 290-130.

The bill then moved to the U.S. Senate, where southern and border state Democrats staged a 75-day filibuster—among the longest in U.S. history. On one occasion, Senator Robert Byrd of West Virginia, a former Ku Klux Klan member, spoke for over 14 consecutive hours.

But with the help of behind-the-scenes horse trading, the bill’s supporters eventually obtained the two-thirds votes necessary to end the debate. One of those votes came from California Senator Clair Engle, who, though too sick to speak, signaled “aye” by pointing to his own eye.

Having broken the filibuster, the Senate voted 73-27 in favor of the bill, and Johnson signed it into law on July 2, 1964. “It is an important gain, but I think we just delivered the South to the Republican Party for a long time to come,” Johnson, a Democrat, purportedly told an aide later that day in a prediction that would largely come true.

Did you know? President Lyndon B. Johnson signed the Civil Rights Act of 1964 with at least 75 pens, which he handed out to congressional supporters of the bill such as Hubert Humphrey and Everett Dirksen, and to civil rights leaders such as Martin Luther King Jr. and Roy Wilkins.

What Is the Civil Rights Act?
Under the Civil Rights Act of 1964, segregation on the grounds of race, religion, or national origin was banned at all places of public accommodation, including courthouses, parks, restaurants, theaters, sports arenas, and hotels. No longer could Black people and other minorities be denied service simply based on the color of their skin.

Title VII of the Civil Rights Act barred race, religion, national origin, and gender discrimination by employers and labor unions, and created an Equal Employment Opportunity Commission with the power to file lawsuits on behalf of aggrieved workers.

Additionally, the act forbade the use of federal funds for any discriminatory program, authorized the Office of Education (now the Department of Education) to assist with school desegregation, gave extra clout to the Commission on Civil Rights, and prohibited the unequal application of voting requirements.

The Civil Rights Act was later expanded to bring disabled Americans, the elderly, and women into collegiate athletics under its umbrella. It also paved the way for two major follow-up laws: the Voting Rights Act of 1965, which prohibited literacy tests and other discriminatory voting practices, and the Fair Housing Act of 1968, which banned discrimination in the sale, rental, and financing of a property. Though the struggle against racism would continue, legal segregation had been brought to its knees in the United States.