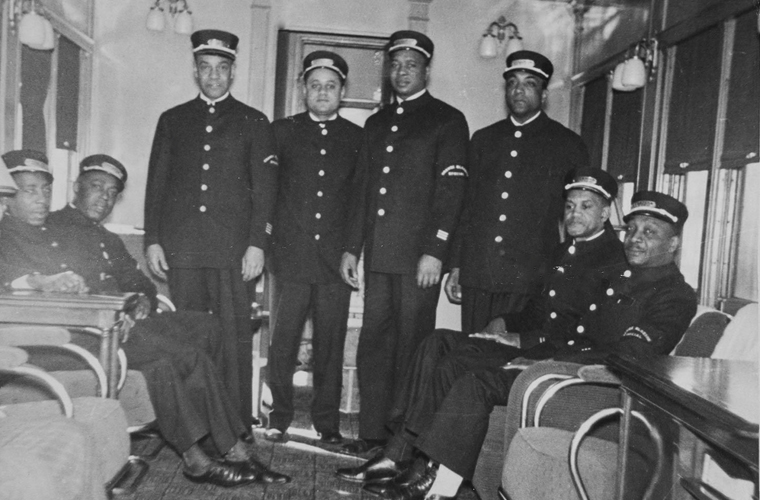 The Brotherhood of Sleeping Car Porters (BSCP) was a labor union organized by African American employees of the Pullman Company in August 1925 and led by A. Philip Randolph and Milton P. Webster. Over the next twelve years, the BSCP fought a three-front battle against the Pullman Company, the American Federation of Labor, and the anti-union, pro-Pullman sentiments of the majority of the black community. Largely successful on each front, the BCSP is a significant institution in both the labor and civil rights history of the twentieth century the United States.

The BSCP faced long odds in 1925. Despite its charismatic leader, the union attracted only a small number of rank and file workers and at no point before 1937 did it enroll a majority of porters. Most black leaders outside the organization distrusted labor unions and, moreover, viewed George Pullman, whose company provided jobs, relatively high incomes, and a modicum of services to black employees, as an important ally of the black community, a reputation Pullman assiduously exploited in his effort to undermine the nascent union. Meanwhile, while the AFL granted federal-local status to individual BSCP locals, it refused to charter the all-black union as a full-fledged international.

Transforming his newspaper, the Messenger, into a propaganda vehicle for the BSCP and tirelessly campaigning on behalf of the union, over time Randolph convinced black leaders, clergymen, and newspaper editors that Pullman’s paternalism masked what was, in fact, a servile position for blacks within the company and a subtle recapitulation of the master-slave relationship. In the process, the BSCP became both a vehicle and a symbol of black advancement and, according to one historian, helped facilitate the “rise of protest politics in black America.”

On the labor front, the BSCP survived an aborted strike in 1928 and a precipitous drop in membership due to company opposition and the hardship of the Great Depression. A favorable turn in the political climate brought about by the New Deal, combined with the persistence of union leaders and members finally forced the company to recognize the BSCP in 1935. The AFL granted the BSCP an international charter that same year and, after protracted negotiations, the union won its first contract in 1937. Randolph used the BSCP and his own position in the AFL-CIO leadership as a wedge for breaking down racial segregation in the American labor movement. The BSCP also remained a source of inspiration and activism in African American communities, providing a training ground for future civil rights leaders like C.L. Dellums, E.D. Nixon, and of course Randolph himself.

BSCP membership eroded steadily in the 1950s and 1960s due to the overall decline of the railroad industry. In 1971, it experienced a brief resurgence with the rise of Amtrak, a government-sponsored railway passenger service. However, in 1974 Amtrak made a contract with a rival union, the Hotel Employees and Restaurant Employees Union. The move was the final blow for the BSCP. In 1978 the BSCP merged with the Brotherhood of Railway Clerks, now known as the Transportation Communications International Union.